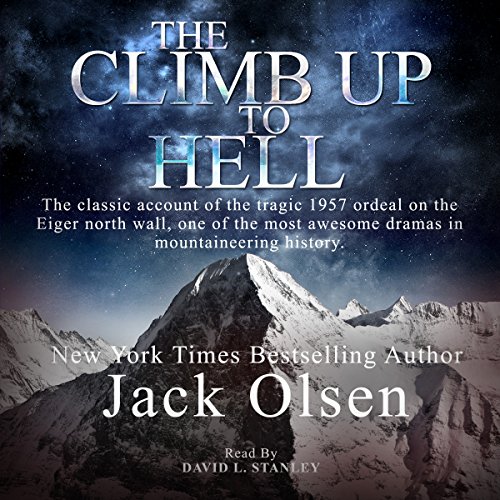 The Climb Up to Hell

In the heart of the Swiss Alps stand the three majestic peaks of the Bernese Oberland, Europe's most famous mountain range. The highest, at 13,638 feet, is the Jungfrau. Next is the Mönch at 13,465 feet. But it is the smallest, the Eiger, rising 13,038 feet above sea level, that is by far the deadliest. Called a "living" mountain for its constantly changing conditions--unpredictable weather, disintegrating limestone surfaces, and continuously falling rock and ice--its mile-high north wall is perhaps the most dangerous climb in the world. And that may be just what beckons elite Alpinists to scale the treacherous peak against the odds.

In 1957, nearly 40 years before the well-known Mount Everest tragedy, two teams of confident climbers set out to summit the north wall of Eiger Mountain. Not long into their journey, onlookers could tell the four men were headed for disaster. Soon rescue teams from all over Europe raced toward Eiger--yet only one of the four climbers survived to face unfounded international accusations. In a story as fascinating as any novel, Jack Olsen creates a riveting account of daring adventure, heroic rescue, and one of the most baffling mysteries in the history of mountain climbing.

What listeners say about The Climb Up to Hell

Very interesting story ruined by the narration. Tone, pace and enunciation way off for this kind of book. I think the North Wall climb is probably easier than listening to this book! I hope a new version is released with a different narrator.

Good book, Well written. Brought a copy for a friend who also really enjoyed it.

I have read this book before and very much enjoyed the fascinating story. However, in common with other reviewers, I found the narration to be, frankly. awful. The dynamics, enunciation and pausing were worthy of a schoolboy..
I don't want to be rude, so I won't say any more!

I enjoyed the story. However, the odd, uncomfortable speech pattern of the narrator detracted greatly from the intensity and drama that this story should convey.

What was one of the most memorable moments of The Climb Up to Hell?

The rash impulses and lack of preparation of some of the climbers certainly sticks in my mind.

Would you be willing to try another one of David L. Stanley’s performances?

NO! I highly recommend his next project is the reading of an EPA manual, or perhaps the phone book. His voice was made for boring, predictable and uneventful material.

Did The Climb Up to Hell inspire you to do anything?

Read more about mountain climbing...also, I don't think I will ever climb anything more than a small mole hill...

There is an excellent German movie about the attempt by two Nazi soldiers to climb the Eiger in the 1930s. It makes an excellent supplement to a general understanding of the history of the mountain.

This was a great story but the performance was terrible! The reader, David Stanley, had either not prepared enough or was trying far too hard to read with effect. His emphasis was often on the wrong words and his stop,start style was really off-putting.

This book is read as if someone is reading to 4-year olds at daycare -- the BIG! bad WOLF! had BIG! teeth and RED! eyes...

Absolutely ridiculous inflection, moronic style. I can't believe the producers could have said yeah sounds good. The narrator should get some other type of job. He ruined this audiobook. The producers were obviously not invested in the outcome.

What would have made The Climb Up to Hell better?

I tried and tried to get through this audiobook but the narrator is just awful. He reads like he is reciting a fairytale to a three year old. It's ridiculous. Absolutely could not tolerate it.

Would you be willing to try another one of David L. Stanley’s performances?

David L. Stanley is not even absorbing the words as he reads. His inflection is absurd and never has a thing to do with the sentence. I agree that it sounds like he's reading a fairy tale to a toddler, but that toddler would grow up to either have a learning disability or just complete social awkwardness (but probably both). I've tried about a dozen times to get through this audiobook, but it's not going to work. That's why I gave the story only 3 stars - because I won't hear the last half.
Quite plainly, there is no worse narrator than David L. Stanley - the person reading this very review is a superstar in comparison. (Yes, even if you're mute.)

Sounded like he was the guy who couldn't make it for the preliminary audtions for the ninth grade play.

Disappointment. Jack Olsen is an excellent writer. The narrator ruined it.

Would you try another book from Jack Olsen and/or David L. Stanley?

Perhaps I would try another book written by Jack Olsen, but not when narrated by David L. Stanley for he reads as though he's sitting in front of a kindergarten class reciting poetry. Don't believe me? Take a free listen, then have a free listen to some of the other books he narrates on audible... I simply couldn't make it through the first chapter which makes me feel ignorant for not paying enough attention when I briefly listened to the narrator prior to purchase. If only I could give the book back and get a free return credit. :(

David L. Stanley has a great voice, but places longer than normal breaks in between various words that shouldn't have a break in verbal cadence... He elevates words and speaks with exuberance at all the wrong times much like a story book reader in front of children. It provides the added affect that whatever he's saying seems so amazingly incredible and supercalifragilistic!

Record this book with a different narrator...

Honestly... after purchasing the book, I first thought David L. Stanley's narrating would be something I would be able to tolerate. After about 10 minutes I become annoyed at myself for not paying enough attention to the narrating prior to my purchase. As time went on, listening to the book simply angered me. I couldn't fathom why a narrator would read audio books like this. Why is he reading like he's sitting in front of children? Eventually I became even more irritated at whomever hired the narrator as they chose a reader who gave a stale narration with false, incorrectly placed cadence. I've never been more disappointed with an audible purchase during my membership and this further teaches me the lesson of pre-listening to a book very carefully before purchasing it.

What would have made The Climb Up to Hell better?

This was the only audiobook that I was forced to delete solely because of the narration. The reader had such a strange prosody. It sounded like somebody with a perfect American accent was reading something that he didn't comprehend.

This is an amazing story. Maybe try it not as an audiobook.

I love Jack Olsen's books and my favorite narrator is Kevin Pierce. Kevin did not narrate this novel, however. This narrator is awful! His puts emphasis and dramatic pauses in all the wrong places!!! Do me a favor and save your money, because I certainly can't get mine back :(

... probably tries his best. He does not, however, have the range, elocution, or gravitas, necessary to the telling of this story. The Northeast USA accent is just not doing it for the story of treacherous Swiss mountain faces.