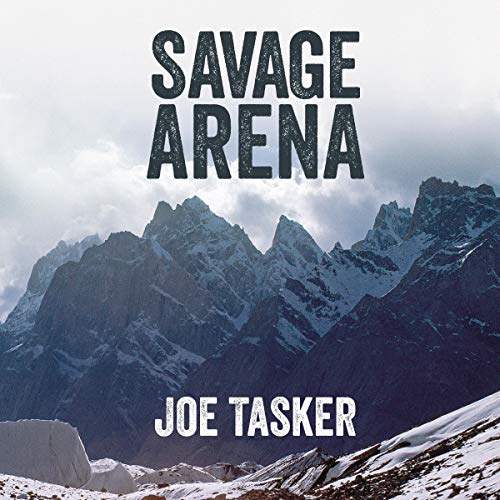 Joe Tasker lies, struck down by illness, in a damp, bug-infested room in the Himalaya, wondering if he will be well enough to climb Dunagiri, his first venture to the "big" mountains. One of Britain’s foremost mountaineers and a pioneer of lightweight climbing, he is about to attempt one of the first true "Alpine-style" climbs in the Greater Ranges.

The Dunagiri attempt forms part of Tasker’s striking tale of adventure in the savage arena of the mountains. A superb writer, he vividly describes the first British winter ascent of the North Face of the Eiger, the first ascent of the West Wall of Changabang - considered a "preposterous" plan by the climbing world - and his two unsuccessful attempts on K2, the second highest mountain on Earth.

Savage Arena is both moving and exciting, an inspirational tale of the adventuring spirit which follows its own path, endlessly seeking new challenges, climbs and difficulties to overcome. It is not reaching the summit which counts, it is the journey to it. It is also a story of the stresses and strains of living for long periods in constant anxiety, often with only one other person, and of the close and vital human relationships which spring from those circumstances.

Someone I’d liked to have met

The author told the story of gruelling torture and agony, which must have involved much boredom, into a compelling climbing classic.

I love the way he explains his feelings for his climbing partners in the context of how he felt at the time . If you take a while to get to know someone your initial impression may be unfavourable. Tasker writes honestly about his feelings at the time and admits if he doesn’t actually know how he feels about some aspects of life as there is conflict.

The Greatest Mountaineering Book Ever.

Savage Arena by Joe Tasker is widely acknowledged as one of the greatest books ever written about mountaineering. Why is this the case?
Firstly it is an accessible read for people unfamiliar with climbing, while never dumbing down the activity to make it understandable. The quality of the writing is of an extremely high standard, rarely seen in the genre. The book perfectly captures the height of British alpine climbing in the greater ranges, spanning the epoch from the first British ascent of Everest, to essentially the tragedy on that mountain in 82. The book documents several key expeditions of this era, Dunagiri, Changabang, Kangchenjunga and K2. Revealing in honest detail what game these men were playing.
This period of mountaineering is over, hard new routes on the highest mountains, yet this book has stood the test of time and remains essential reading.

Gripping stories from the mountains

First audiobook as I'd always thought that I would struggle to 'keep listening' and have to rewind every five minutes. No chance of that with this book, stories that flowed and painted evocative pictures in the mind to keep you involved and focusing on what was happening and where it would go next. Dark images of suffering and the thought processes of either escaping it or going even deeper into the suffering gave thoughts towards what I think I may do in a similar situations and gives heed to the mental strength of the author and Co to continue on it such times!

Took a little getting used to the ‘Tinny’ sound quality- this isn’t a big-budget production I would guess, but you quickly get used to it and the narrator makes for a convincing Joe.