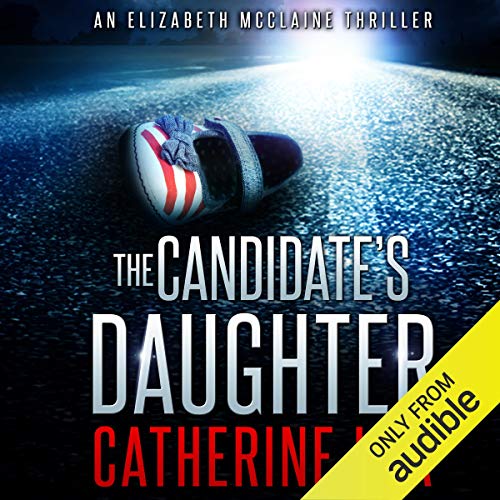 By: Catherine Lea
Narrated by: Amy Tallmadge
Try for £0.00

The plan is simple: kidnap the daughter of Senate candidate Richard McClaine, take the money and run. Nobody gets hurt, the kid goes home alive.

Twenty-two-year-old car thief Kelsey Money thinks it's the worst idea Matt and his drug-fueled brother have ever come up with. But Matt's the planner. He's the one Kelsey has always depended on.

Then, she discovers she only knew half the plan. By the time she finds out the rest, she's been framed for murder, and six-year-old Holly McClaine won't be found alive.

Across town, Elizabeth McClaine has no idea what her daughter was wearing when she disappeared. When Holly was born with Down syndrome and a cleft palate, Elizabeth placed her only child in the care of a nanny while she fought postpartum depression.

But when Holly is kidnapped and Elizabeth discovers the detective leading the hunt has already failed one kidnapped child, Elizabeth knows she cannot fail hers.

The Candidate's Daughter and its sequel Child of the State are additions to the great action and character-driven mystery thrillers in the tradition of J.D. Robb, Faye Kellerman, and Mary Clark Higgins.

What listeners say about The Candidate's Daughter

What made the experience of listening to The Candidate's Daughter the most enjoyable?

It is an exciting book with well-written characters. The author is a great story teller. The narrator gives an excellent performance. In all this is just a great book.

Yes, first the characters are very likable and well written. The story is fast paced and has many unforeseen plot twists. Kelsy and the Candidate's wife are wonderful protagonists. They are both fighters and meet their challenges head on. This book captures the amazing experience of knowing a Down's syndrome child and the joy they bring.

What does Amy Tallmadge bring to the story that you wouldn’t experience if you just read the book?

She gives each character a unique voice. Each character is an individual and sounds like it. It is easy to follow and very edge of your seat. I especially like the voices of Holly and Kelsy.

Definitely, but it is a little too long for that. It is very suspenseful and keeps you engaged all the way to the surprising end.

Includes swearing, but in a realistic lifestyle way rather than graphic. Touching and inspiring book. I received this book for free in exchange for a fair review.

Would you consider the audio edition of The Candidate's Daughter to be better than the print version?

I have not read the print version so I am unable to compare the two. However, I do not believe I could have brought the story to life the way in the way that Amy Tallmadge managed to do for me.

This story was written extremely well. Excellent and interesting characters. The story peaked my interest from the beginning and maintained it throughout. With so many twists and turns, I was unable to determine who was responsible until it was revealed to me. It is very rare that I manage to find a book where I am unable to determine "who done it" but this book managed to do just that. I also enjoyed the narration by Amy Tallmadge. She has great cadence and inflection. Also, she manages to give each character a unique voice that separates them from each other. Not all narrators can do this. For example, I lose interest in the characters and sometimes the story when a narrator is not able to provide a different voice for more than 1 female/male character. That is simply not the case here ... Amy is superb! This is the first time I have heard Amy narrate and will be looking for more of her narrations in future purchases.

There was no one scene in particular that was my favorite. I enjoyed the whole story immensely.

Yes ... this is definitely a story I would have wanted to listen to all in one sitting but I also like for my books to last me a couple of days. I usually do not purchase audiobooks that are abridged or less than 10 hours. If I spend money on a book, I don't want to finish it in a couple of hours. It wouldn't be worth the purchase to me. However, if I was to listen to a book all in one sitting ... this would have definitely been one I would have done that with.

This book basically takes place over just a few days. However, the author really asks you to suspend common sense for the story to continue past day one. We are asked to believe that a child can be kidnapped and there is no effort by the police to track down the nanny; that the driver who was supposed to pick up said child from school is never even questioned; that a car can leave a garage where a speeding car had entered and the police would not stop that car; that the police would not have someone watching, or at, the candidate's house and thereby allow the kidnappers re-entry; that a kidnapper can understand the language of a special needs child even when the parents couldn't; that even estranged parents won't show up to support their child if their grandchild has been publicly and cruelly kidnapped; and it goes on.

By day two, you just hate the characters so much--kidnappers and parents alike--that the crazy and lack of common sense is just a side story.

Kudos to the narrator! She was awesome.

Great book with a great story. Could not stop listening. Cannot wait for Book 2.

A very well-written, fast-paced action story that has you bonding with the characters, but not the antagonistic losers.

enjoyed the story. sad ending but great future for the family. did he win the election?

What an unexpected and wonderful book!!

What an unexpected good read this book was!! Excellent story, brilliant character development, and surprises that make you want to read more to find out what will happen next! I will look for more from this author for sure!! I got this book as a free offering, and too advantage of getting the audio version...what a great idea! I listened to most of it, but read some too, the system keeps track on either medium and gives you the option of going to the last place you stopped. I have not done this before, but now that I have tried it, I will be doing it more often :-)

The biggest problem I had was the redundancy of the conversations. The main characters were portrayed as whiny incompetent women--and that's fine, that's not where my issue is. I mean it's definitely annoying, but the biggest issue I had was the same conversations happened between the husband and wife, the boyfriend and girlfriend, over and over. I felt like a dog chasing it's tail.

I still want to know what happens, but I"m not willing to sit through the 2 hours I have left in order to find out.

A Great Edge of Your Seat Thriller

The Candidate's Daughter was a uniquely written book. In the center is Holly, the kidnapped child with Down Syndrome whom you can't help but fall in love with. A sweet, loving child surrounded by a lot of ignorant and selfish adults. We have the narcissistic parents who are completely lacking in parenting skills and then the idiotic kidnappers with a twist; Kelsey, the one in charge of the child is the one who shows her the most love and kindness.

This was a good psychological thriller with flawed characters who I wasn't sure who to like or dislike. The characters who were supposed to be the good people were the bad with a few redeeming qualities and the same with the bad guys/girl. It was like an emotional rollercoaster. It was draining at almost eleven hours of intensity.

Amy Tallmadge did an incredible job reading this book. She was in fact flawless. Her voice inflections were what made this a good listen and drew me in. She's an amazing voice actor whom I'll listen to again. She did a super job.

Entertaining, interesting and enjoyable. Really good story full of action and suspense.
For me it is a 3.5 star listen.

I don't think I've ever listened to a book with so many unlikable characters.

Kelsey and Holly are the only characters that I liked.

Kelsey her abusive boyfriend Matt and his drug addicted brother Lionel have a grand plan, kidnap an innocent little girl for ransom money from her wealthy parents. Not just any parents her father is on the verge of becoming a Senator. But all is not as it seems and soon Kelsey realizes she's in way over her head. But who is actually the mastermind behind the kidnapping?

There were some unanswered questions at the end of the story. Maybe this will be answered in the next book.

Amy Tallmadge did a really good job with the narration. Good character voices. Great voice for Holly. She was able to convey all the emotions of the characters. Easy to tell which character was speaking.

This Audiobook was provided by the author, narrator or publisher at no cost in exchange for an unbiased review courtesy of AudiobookBoom