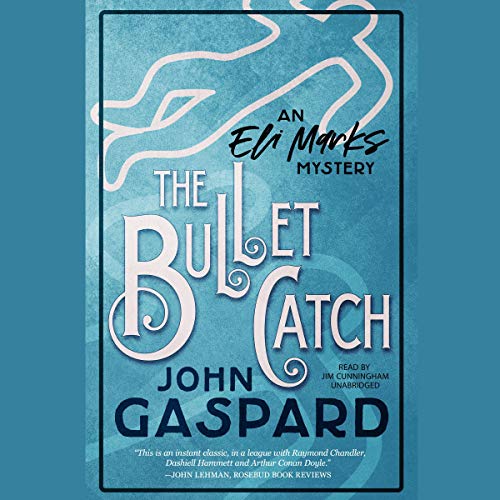 Newly single magician Eli Marks reluctantly attends his high school reunion against his better judgment, only to become entangled in two deadly encounters with his former classmates. The first is the fatal mugging of an old crush's husband, followed by the suspicious deaths of the victim's business associates.

At the same time, Eli also comes to the aid of a classmate-turned-movie-star who fears that attempting the Bullet Catch in an upcoming movie may be his last performance. As the bodies begin to pile up, Eli comes to the realization that juggling these murderous situations - while saving his own neck - may be the greatest trick he's ever performed.

What listeners say about The Bullet Catch

The book begins with an old friend showing up and inviting Eli to attend their high school reunion. He also spills the beans about his latest acting bit, a movie about a magician who dies in the execution of an illusion. Eli agrees to give him a hand.

Meanwhile, at the reunion, Eli runs into his crush from 20 years ago, and things quickly escalate and deteriorate (in that wonderful way that all murder mysteries deteriorate) from there.

John Gaspard is fast becoming one of my new favorite authors. The pacing of this story felt a little slower than the first book, but it didn’t drag. I love the way he weaves famous magic tricks and illusions, well known music and comedy acts, and allusions to classic movies into his plot and dialogue. It makes for such a great background, and many common bonds between the reader and characters. I really want to hang out with Uncle Harry and the “Artful Codgers” and listen to them talk smack and reminisce over a beer or two. Granted, the younger generation won’t recognize many of the references, I know there are quite a few going over my head, and I’m far more immersed in the entertainment of 50 years ago than most people my age. Nevertheless, it’s written in such a way that ignorance shouldn’t detract from the reading experience in any way, though there are some definite clues you’ll miss if you’re not up on your trivia.

Coincidentally I happened to have watched one of the movies mentioned less than a week before I listened to this book, so I had a hint fresh in the mind, though it didn’t give much away.

I’ve come to love Eli Marks (in a strictly platonic way), he’s clever and thoughtful without being particularly brilliant. He’s funny and sarcastic, and just so real. Combined with the first person POV that the book is written in, it’s like he’s just telling you a story. Maybe sitting on the couch with you. I’m pretty fond of all the characters, Frannie, Megan, and of course, Harry. Even Marks’ Ex-wife Deidre is is a great character.

Quality wise, I have to give it the full 5 stars, everything is clear, no EQ or mic distance issues, and the music is great, and not too long.

As for Jim Cunningham, he is one of my new favorite Narrators. He nails the tone of this book, and delivers all the characters flawlessly. He captures Harry’s gruff, crotchety old voice, and Eli’s younger, clever yet lacking a little self-confidence, personality. He also delivers on the female characters, softer, but not in anyway the “man pretending to be a girl” tone that some guys adopt.

I can hardly wait for the next book. Three cheers for John Gaspard!

I hope the main character doesn't continue to be this idiotic at the end of every book. He practically goes and tells the murderer that he knows what happened -- in each book, so far -- but I'll read one more (they're enjoyable, after all) and see if he learns his lesson. I tried to phrase that in such a way that doesn't give away anything. Honestly, though, I may continue to listen to them even if he does keep up the trend! For the most part it's intelligently written, reasonably lighthearted, and fun.

Loved the story, characters and narration. It was difficult to understand how Eli missed the insurance, but everything else flowed as smooth as old silk. Take a chance - you'll probably smile.

I don’t think it was quite as gripping as the first, but for fans of magic and mystery it was still fun.

Great fun mystery with characters who make you laugh a lot. There is a real plot filled with twists, red herrings, and misdirections but it's the fun that I will remember at odd times!
The audio is narrated by Jim Cunningham who really adds to it all.

I loved this story! It was a fantastic mystery and narrated beautifully! A MUST read!!