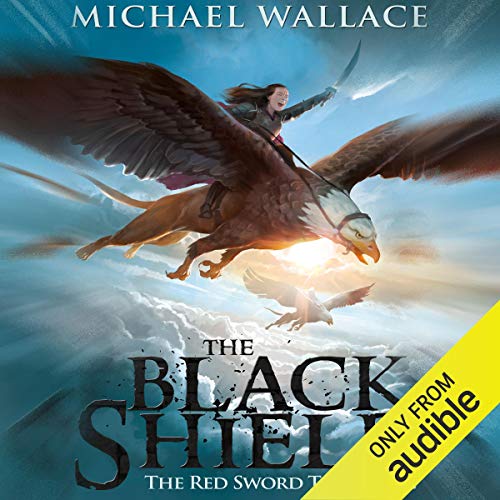 By: Michael Wallace
Narrated by: Rosemary Benson
Try for £0.00

After the death of the paladin captain and the defeat of the sorcerer's attack, apprentice wizards Markal and Nathaliey flee their homeland with the red sword in the hopes of carrying it to safety in the barbarian homelands. They must cross the mountains ahead of the sorcerer's marauders while avoiding the giants and griffins that infest the high passes. But before they can cross, the two companions are taken prisoner by a band of paladins who are convinced that Markal and Nathaliey are lying about their captain's death. The sorcerer has invaded the paladin lands, and they have begun a desperate campaign to throw back his forces.

Meanwhile, the pursuing marauders have been joined by more servants of the enemy: the sorcerer's dark acolytes, who are eager to test their growing magic against the two young wizards they have been sent to kill.

What listeners say about The Black Shield

It's As Strong As The First Book!

This is book two in the Red Sword trilogy, if you haven't read book one I'd recommend reading it first. This review will contain spoilers for the first book, so read at your own risk!

Markal and Nathaliey are journeying across the mountains to Eriscoba, returning the red sword to Bronwyn's group of paladins. The necromancer's grey marauders follow them, determined to kill the apprentice wizards and reclaim the sword. Markal and Nathaliey face griffins, giants, and dark sorcerers as they join forces with a former enemy to defeat a former ally. Meanwhile, Chantmer continues to struggle with his role as apprentice as he guards the library of the Crimson Order.

This is a strong sequel that I enjoyed just as much as the first book, it's fast paced and full of action. The writing flows well and the battle scenes are so descriptive, I could imagine everything just as it happened. While there isn't a ton of worldbuilding, there's enough to get a clear picture of the land and the motivations of its rulers. There are a lot of questions left to be answered and battles left to be fought, and I can't wait to see where the next book leads. There's plenty here for sword and sorcery fans to enjoy.

The apprentice wizards are characters you'll want to root for. The apprentices aren't perfect, they each have their own weaknesses, both in the strength of their magic and their personalities. The odds are overwhelmingly against them, but they each fight hard in their own way. I liked them all the better for it.

The narration was well done, Rosemary Benson performed evenly without overacting. She is able to perform male voices convincingly, and gives different nationalities their own accents. She has a smooth style of narration and was consistent thoughout the book. It was a great performance that added to the experience. I requested a copy of the audiobook, and I'm voluntarily leaving a review.