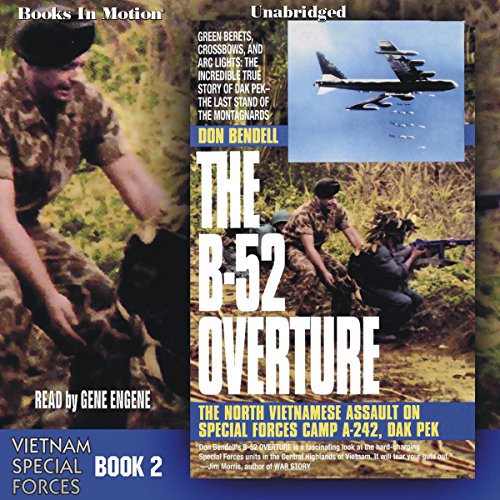 By: Don Bendell
Narrated by: Gene Engene
Try for £0.00

The Vietnamese stole their land. The NVA raped their daughters. The Green Berets know them as the most fearless and loyal warriors in the land. They were the Montagnards, who called themselves “Sons of the Mountains” and always fought to the death. In this incredible memoir of wall-to-wall combat in the jungle near the Laotian border, Special Forces Lieutenant Don Bendell recounts the saga of the A camp of Dak Pek, 242.

On those death-strewn hilltops in 1969-70, a handful of Green Berets and an army of ‘Yards held off the entire might of the North Vietnamese – until even their courage and fighting skill could not staunch the flow of blood and tears.

What listeners say about The B-52 Overture

ok... not much different then the others

Ok so the first book in this series is great, the 2nd ok and I would skip this one if you have listened to the others. if not this would be a great book. The problem is he retells the same stories in each book with a little more detail, a few new stories from training, and a slightly different main event from the others. but each book is the same 1 year period of time told from the same perspective.