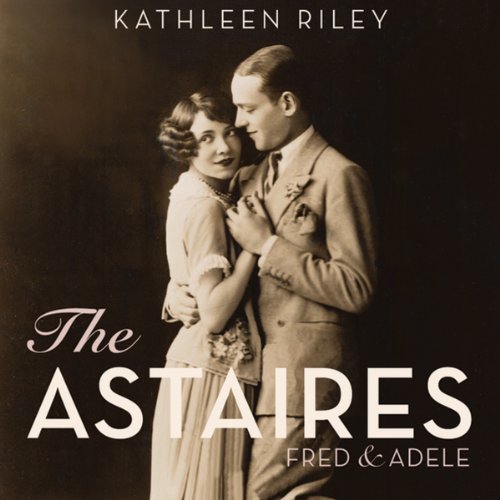 Before "Fred and Ginger" there was "Fred and Adele", a show-business partnership and cultural sensation like no other. In our celebrity-saturated era, it's hard to comprehend what a genuine phenomenon these two siblings from Omaha were. At the height of their success in the mid-1920s, the Astaires seemed to define the Jazz Age. They were Gershwin's music in motion, a fascinating pair who wove spellbinding rhythms in song and dance. In this book, the first comprehensive study of their theatrical career together, Kathleen Riley traces the Astaires' rise to fame from humble midwestern origins and early days as child performers on small-time vaudeville stages (where Fred, fatefully, first donned top hat and tails) to their 1917 debut on Broadway to star billings on both sides of the Atlantic. They became ambassadors of an art form they helped to revolutionize, adored by audiences, feted by royalty, and courted socially by elites everywhere they went. From the start, Adele was the more natural performer, spontaneous, funny, and self-possessed, while Fred had to hone his trademark timing and elegance through endless hours of rehearsal, a disciplined regimen that Adele loathed. Ultimately, Fred's dancing expertise surpassed his sister's, and their paths diverged: Adele married into British aristocracy, and Fred headed for Hollywood.

The Astaires examines in depth the extraordinary story of this great brother-sister team, with full attention to its historical and theatrical context. It is not merely an account of the first part of Fred's long and illustrious career but one with its own significance. Born at the close of the 1800s, Fred and Adele grew up together with the new century, and when they reached superstardom during the interwar years, they shone as an affirmation of life and hope amid a prevailing crisis of faith and identity.

You may know the saying that Ginger Rodgers did everything Fred Astaire did but backwards and in high heels. Well she didn 't. Watch the films. She knocks spots off him as an actor and is an equal contributor to the films overall, but as a dancer she moves from one position to another in a learned sequence where he is as expressive and fluid as a great ballet dancer ( many of whom would agree about his greatness).

The woman who did probably do everything he did, and possibly more, backwards and in high heels was his sister Adele. Untill she left the stage to marry she was the greater star of the two. Unfortunately she was never filmed, and her quavery singing voice can sound strange to modern ears. But reviews leave no doubt about her talents as dancer and comic.

This book is an interesting history of the Astaire partnership. But I find the reader too foursquare and dull. Her idea of quoting either Astaire is always to be bright, brash and loud and in other ways I find her too lacking in variety.

Finally, if like me you are British her determination to mispronounce all British names if possible could be very wearing. BerNARD Shaw: Ok. He was Irish, that's the American pronounciation and would have been used to his face. Nor-WITCH: I daresay there is a Norwich somewhere in New England pronounced like that. Adelph-eye and SAH-voy Theatres: plausible so never mind. But when she reversed the usual American tendency to turn an "ah" sound into an "ay" sound (Aydolf Hitler turns up) and pronounced the name "Latham" as Lahtham I began to wonder if it was a deliberate wind-up. "Glasgow" emphatically rhymed with "cow" finished me off and I ordered the paper version instead.

I should have gotten a book solely about Fred

I wanted to know about Fred's career when he was successful, his work ethnic, and his understanding of dance. This book is about him and his sister especially their beginning careers. If that's what your looking for then it's a great book.

for all fans of astaire

I loved every second of this book, and wish there were a part 2. A wonderful trip back to a special time and place.

The dancing partnership between Fred and older sister Adele is, naturally, under appreciated today. We can only imagine the stir they created from looking at the old photographs, usually with Adele’s startlingly frank gaze meeting ours while Fred looks adoringly at her.

Their personalities come alive in this audiobook and each is given their share of attention. Adele, especially, comes across as the more fascinating of the two: bold, comic and sparkling, while Fred was more serious, but the better dancer. At times, I felt an ache that I would never see the numbers described, such as The Whichness of the Whatness from Stop Flirtin’.

Their stories are continued past Adele’s retirement to a largely tragic life punctuated by lost children and tried by two alcoholic husbands, while Fred overcame initial doubts as to his future without her to go on to the more famous partnership with Ginger Rogers and his well-known detestation of it. (And their mother was a formidable offstage presence of what was really a trio both professionally and personally.)

The crisp and energetic reading by Barbara Edelman is a performance, with her adopting a distinct voice for every quote, right down to Fred’s first wife’s pronunciation of “r’s” like Spaceball’s imposing cleric who opens his mouth and utters “mawwiage.” This might not appeal to some. Even her normal reading voice is very expressive, with slightly ear-catching idiosyncrasies. The only slight complaint is that the contrast between her normal reading voice at times and the sudden, louder brashness of her other voices did not always make for even volume.

However, I confess I found it extremely charming, and did not at all feel it detracted from the material. I could listen to it again, having just finished it, for the pleasure of Edelman’s voice, which is at turns velvety and slightly quirky even when not quoting. (My wife overheard it and commented that she liked it, too.) It seemed particularly suited to the material.