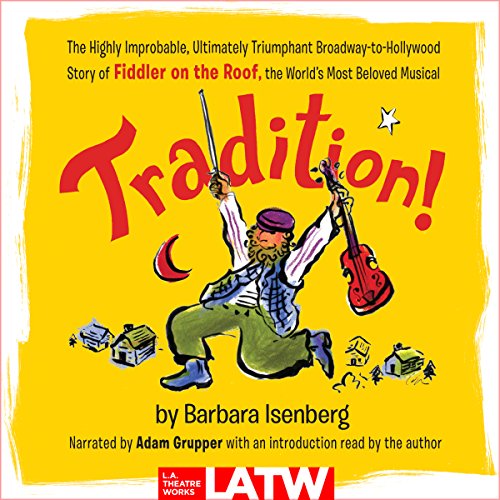 By: Barbara Isenberg
Narrated by: Adam Grupper
Try for £0.00

Since it first opened on Broadway in September 1964, Fiddler on the Roof has constantly been onstage somewhere, including five Broadway revivals, four productions on London's West End, and thousands of schools, army bases, and countries from Argentina to Japan. Barbara Isenberg interviewed the men and women behind the original production, the film, and significant revivals - Harold Prince, Sheldon Harnick, Joseph Stein, Austin Pendleton, Joanna Merlin, Norman Jewison, Topol, Harvey Fierstein, and more - to produce a lively, popular chronicle of the making of Fiddler.

Published in celebration of Fiddler's 50th anniversary, Tradition! is the book for everyone who loves Fiddler and can sing along with the original cast album.

What listeners say about Tradition!

Got the DVD out straight away

Turns too soon to collection of nice nostalgia and triviata. Strongest on production of the initial Broadway show