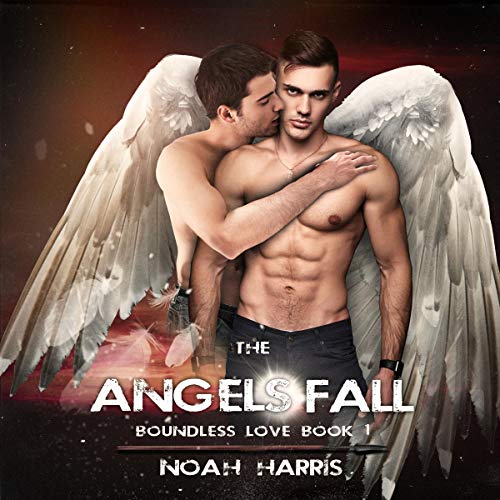 By: Noah Harris
Narrated by: Christopher Kauzlarich
Try for £0.00

Tobias thought sequestering himself alone on a mountaintop would protect his ravaged heart, but even he can’t deny the passion of an unearthly love.

Tobias had gotten so used to living in perfect - if lonely - solitude that nothing outside an act of god could have driven him back out into the world. After a childhood filled with monstrous cruelty in the guise of piousness and the swift, brutal loss of his truest love, he dragged his bruised and beaten heart off into the wilderness. He thought he was finding safety in isolation, but love has a way of sneaking past even the most well-guarded fortress.

The naked and unconscious man Tobias found in the surrounding woods is more than mysterious, with fallen-angel looks that are more than just coincidence. Azrael spent centuries on Earth ushering lost souls back through those heavenly gates. His sacrifice takes a toll, and he longs to return to the gracious arms of his heavenly brethren. Before he’s granted entrance, Azrael is given one final task: save the soul of Tobias, a lost and brokenhearted mortal.

As Tobias teaches Azrael the many delights of human appetite, the two men find themselves falling more deeply into each other’s hearts. But will a human existence ever be enough for a fallen angel? Can Tobias accept that even the most scarred and broken heart has hope of healing?

The Angel’s Fall is a gay romance novel with earthy sex scenes. Traversing both the ecstasy and the agony of love’s landscape, two men must confront their own diametrically opposed histories in order to save their future. Perhaps, there could be heaven on earth.

What listeners say about The Angels Fall

Give it a chance

Took me a bit to get into the story. I even thought of returning it. But then.... something happened and it grew on me. So much so that I purchased the next book in the series. The book is not one of the most skillfully written, but all the same, it takes a hold of its reader and draws you into the next level. All in all, I enjoyed the story and hope you will too.

The Angels Fall is the first book in Noah Harris' series Boundless Love. The story is fantastic, grabbing your interest and delivering a story that keep you captivated. Tobias and Azrael are great characters - it's fun to watch them together and to see them develop and grow. The story is an amazing journey - filled with twists and turns, a well written and well developed story, emotions and romance. Loved it!


* The audiobook is narrated by Christopher Kauzlarich. Smooth voice, that is easy to listen to and helps you get lost in the world created by the author. The characters and their personalities shone through. Great job!

Would an Angel Fall for You?

I was in tears from the beginning of the story. Hearing of an angel's fall is never easy, and narrator Christopher Kauzlarich brought out the mental and physical agony very well.

Azrael is a strong angel, happy to lead souls to salvation. This new project, to save a human by willingly falling to earth, is Azrael's mission.

The interaction between angel and human makes the story. Myths, legends, and Biblical references are incorporated into the tale. It's quite interesting.

Surprised by the story line but loved the book

An amazing story about an angel sent to save a human and what transpires between them. I was surprised by the story line but enjoyed how it developed. The narrator did an excellent job bringing the characters to life. On my way to book two. I highly recommend this audio book.

This book was so awesome. I really liked the story line. There isn't any book like this. I highly recommend it. The narration was awesome! I really want more from this narrator!!!

It takes far too long for this story to get going, and the narrator's style is pure anesthesia. I am aware that other reviewers love this book--eventually--but Moby Dick gets off to a peppier start. Perhaps trimming it to a much shorter story would help.

I received an ARC of this audio for my honest review. I really enjoyed listening to this story about Tobias and Azrael. Tobias has a rough life growing up due to the fact that he is gay and winds up losing the love of his life. Azrael is an angel who is sent to earth to help a lost soul but he is not told who it is he’s supposed to help or how to help. Tobias sees what he thinks is like a comet falling to earth and when he goes to take a look he finds a nude man laying in a crater. He takes Azrael back to his place to help him heal and to regain his memory. The narrator made this story very interesting with the voices he used for each character. Can’t wait for the next one in this series.

This is another great listen. Tobias and Azrael's story is just great and I loved see them develop. Then Christopher Kauzlarich did just a great job with this story. Just bring these characters to life and I just couldn't get enough.

Thank you for the ARC

Thank you for the ARC audio,I voluntarily give this book an honest review.
Azrael was sent to help a human, unsure of his mission the angel was sent as a human. Only he was to tell Tobias anything of himself or his mission. Tobias was struggling with life after the death of David the love of his life, finding a naked unconscious man. When the Azrael tells the truth of why he's there will Tobias send him packing without believing him or can Tobias see the truth before Azrael is dragged back to heaven? What will you give up for love? Israel just may have to give up his wings for his human. The narrator did a wonderful job of with these characters.