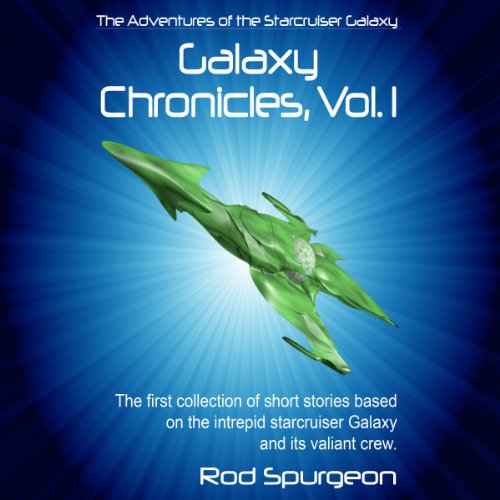 The Adventures of the Starcruiser Galaxy

This collection of 12 short stories is based on the adventures of the starcruiser Galaxy and its valiant crew, including:

"Discount Dinner" - A desperate financial situation forces the crew to purchase food with unforeseen side effects.

"Double-Rowed Smile" - The newly installed, and not so gently used, auto-navigation system threatens to tear the Galaxy apart mid-warp.

"Drone Wars" - An army of murderous drones attack the Tioran Federation, killing anyone that gets in their way.

"Hot Lava" - The Galaxy is stranded on a planet embroiled in a massive tectonic reconfiguration.

"Drone Wars II" - Jonn's side project to create an artificial pet takes on a life of its own.

"Arms Deal" - Steve's attempt to purchase a new rifle from an unscrupulous vendor unwittingly unleashes a hungry beast bent on devouring everyone aboard the Galaxy.

"Stimugen" - Hitch's encounter with artificial stimulants nearly destroys her relationship with the crew-and her own sanity.

"Distant Discovery" - The crew is hired to investigate a distant, unresponsive government space station, but their simple mission reveals a powerful enemy force that wants to keep the station's secrets all to itself.

"Damage Control" - A new training program that disables the Galaxy makes the stalwart ship a tempting target for ruthless salvagers.

"Derelict Disaster" - A mission to salvage valuable technology from the wreck of a devastated pirate carrier turns sour as the derelict ship reaches out from the grave to trap and eliminate the starcruiser Galaxy.

"Deceptive Cargo" - A powerful force sent by a familiar foe is unleashed aboard the Galaxy with only one mission - to eliminate the entire crew by any means necessary.

What listeners say about The Adventures of the Starcruiser Galaxy