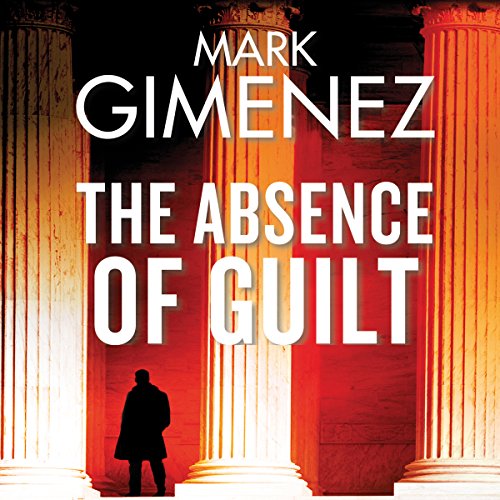 The Absence of Guilt

By: Mark Gimenez
Narrated by: Jeff Harding
Try for £0.00

Mark Gimenez is back as The Colour of Law star A. Scott Fenney takes the stand for an impossible case.

An ISIS attack on America is narrowly averted when the FBI uncovers a plot to detonate a weapon of mass destruction in Dallas, Texas, during the Super Bowl. A federal grand jury indicts 24 coconspirators, including Omar al Mustafa, a notorious and charismatic Muslim cleric known for his incendiary anti-American diatribes on YouTube and Fox News. His arrest is greeted with cheers around the world and relief at home.

The president goes on national television and proclaims, 'We won!' There is only one problem: there is no evidence against Mustafa. That problem falls to the presiding judge, newly appointed US District Judge A. Scott Fenney.

If Mustafa is innocent, Scott must set the most dangerous man in Dallas free, with no idea who is really guilty. And all with just three weeks to go before the attack is due....

What listeners say about The Absence of Guilt

An important polemic we should heed.

If you could sum up The Absence of Guilt in three words, what would they be?

The reasoning is splendid, the arguments sound and controversial though some of it is irritating because of the emotional flummery that was totally unnecessary. The judge was established as a complete and good man though why we had to be faced with his sex life became an embarrassing and unnecessary diversion.

Have you listened to any of Jeff Harding’s other performances? How does this one compare?

Mr Harding is THE prince of narrators. I now tend to choose books that he has narrated.

I can imagine some xenophobic listeners would find some of the arguments distasteful. They are controversial but well worth addressing as they are a very real part of the troubled world we live in. I recommend everyone to listen to this book.

Jeff Harding is excellent as always. Story starts well if a little slow but gets far fetched at the end, almost as if the author had painted himself into a corner with the plot and couldn't think of a convincing way out. Still enjoyable though

Have you listened to any of Jeff Harding’s other performances? How does this one compare?

Do you think The Absence of Guilt needs a follow-up book? Why or why not?

Yes. The story and the balance of characters is brilliant.

What does Jeff Harding bring to the story that you wouldn’t experience if you had only read the book?

His emphasis and timing are perfect

Topical for the times

What did you like most about The Absence of Guilt?

I enjoyed hearing how the lives of Scott, his family and his entourage had progressed. I loved the first two books in Scott's story, this one focused a little less on the central characters as so much was happening around them, still a great listen.


Which character – as performed by Jeff Harding – was your favourite?

All of them, this is a man who has perfected his craft, I love his voice in all of it's guises.

My worry is, due to the amount of coverage ISIS gets in the news, I'm not sure a lot of people would want to read about it for entertainment.

I really enjoy Mark Gimenez books and I'm hoping the saga will continue for Scott and his gang, I can see no other reason for Rebecca being brought into this book, than to set up the plot for the next........... here's hoping!

It took a while to get into this story, but I persevered and boy, was I glad I did. I was gripped.
Great characters, great plot with believable events. I’m now going to check if there is a new AScott novel.
Also have to mention my favourite narrator Jeff Harding, who brings the story completely to life.

Everyone should use Jeff Harding! Thank you to both author and narrator.

Wow what a ride!!

Mixture of courtroom thriller and action book. Keeps you entairtained till the end! I would recommend it

Well what can I say the A Scott Fenny series just gets better and better. This book builds and builds tension till there is a pressure cooker relief. The comedy is not subtle but there are laugh out load moments a plenty. Lest hope for more from A Scott and Mark.

After reading some of the earlier books, I was looking forward to this update in the life / career of A Scott.

However I found this book very disappointing. The story line was fine but too many unbelievable aspects, especially the climax / ending. A little sad I wasted a credit on this....

This book and this series has is lost its edge.
Just waited until the end to be finished. nothing surprising in this title.
will think hard about buying another title.

This was Amazing and heart racing! I have a few niggles, but not enough to say that this wasn't an amazing story. The narrator is very good - even though I still have an issue with how he pronounces one of the character names. But it's better pronounced than the last time.

Read the books in order, you will get far more enjoyment from them. In my opinion, the first and this third book are the best stories.