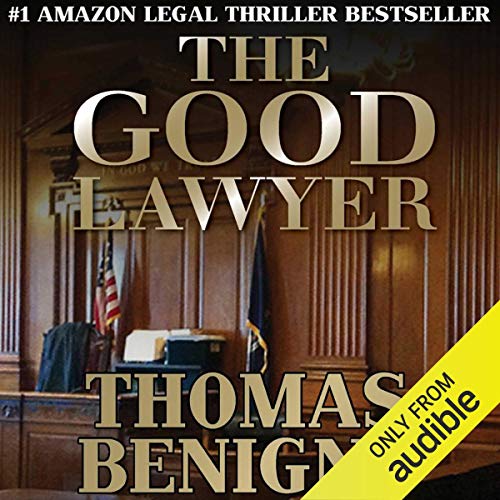 By: Thomas Benigno
Narrated by: Dan Triandiflou
Try for £0.00

Inspired by a true story.

A young, ambitious lawyer is eager to prove he is better than the mobster-dominated family he grew up in. Working as a Bronx Legal Aid attorney, he learns how to twist the system, how to become an unbeatable defense lawyer. But it's 1982. The Spiderman rapist is on the loose and New York City is a city in fear. When an outraged victim commits suicide right before his eyes, searching for absolution and determined to prove his client's innocence, he knocks the pegs out from under the prosecution's case.

Digging deeper, horrifying revelations about his family's past collide with the true identity of the sadistic sociopath behind the real Spiderman's rampage. In the process, this good lawyer comes face-to-face with his greatest conflict and deepest fear: to win, really win, must he sacrifice every principle he believes in and embrace his family's mafia past to become judge, jury, and executioner?

What listeners say about The Good Lawyer

Apparently based on a true story, an up an coming young lawyer defends a young teaching assistant against allegations of child abuse while distancing himself from his family’s Mafia connections. At the same time, women are being raped by the person nicknamed Spider-Man. The stories are intertwined and investigations run parallel. Although there are some small plot holes, it’s by far the best of this genre I’ve read in ages! Onto the next!

Good storyline, albeit a predictable ending

Overall, the story was enjoyable, and the narrator was easy to follow.

The courtroom drama was limited and not as engaging, but the characters had enough depth to keep readers hooked.

The ending became somewhat predictable as the story progressed but it was still a satisfying ending nonetheless.

I was inspired to read this book after reading my Goodreads’ friend, Lewis Weinstein’s, review. This is the first book by a new author. The author is a practicing attorney.

The story is fiction but is based on a real- life story. A young ambitious lawyer, Nick Manino, is attempting to make a name for himself outside of the constraints of his family’s long mob history.

It is 1982 and the Spiderman rapist is all over the media. Manino takes on the case of a teacher’s aide being accused of raping three young children. Manino believes this client is innocent and gets his client off. Later one of the children ends up dead. Manino investigates and finds there might be a relationship with the Spiderman rapist. As he continues to investigate, he finds himself facing a personal crisis regarding his uncle and the mob and his desire to be free of their influence.

The book is well written. The story is compellingly told. The story is a bit slow in the beginning but picks up pace about midway through. The characters are interesting and believable. The book is a good legal thriller read. I am looking forward to reading Thomas Benigno’s next book.

The book is nine and a half hours long. Dan Triandiflou does a good job reading the book. Triandiflou is an actor and audiobook narrator. This is my first experience with this author and narrator.

It was an awesome story with just enough personal details which made it more believable. I love it when good wins over bad with the help of supporting family and friends. I look forward to his next novel!

Well written, well performed and well constructed seemingly written to be enjoyed and entertained. Thanks

Started off okay. Listening while working - It didn’t always hold my interest. Some things didn’t make a lot of practical sense.

A Good Read About a Good Lawyer

Excellent story that keeps the suspense going until the end. Well worth your time to listen or read.

This book is an awesome lawyer book with narration by true New York accent of the lawyer. Listened to it while in the pool this summer and staying in pool hours on end craving the next word. I'd highly recommend.

The Good Lawyer is an interesting legal novel about a lawyer 3 years out of law school working for Legal Aid in the Bronx. His mother is from a an organized crime family with whom she wants nothing to do. The novel is about two cases. There is a love story with a Southern belle lawyer from a wealthy family involved. It is not a bad book; indeed, it is okay if a bit boring at times. The novel is set in 1979. It was first released in 2012. The narration is outstanding.

The next novel in the series is The Criminal Lawyer which is set in 2006. I plan to listen to it next.

I was a bit disappointed with the narrator. He had a heavy New York accent (I'm from New York) but I found it a bit distracting. Also, the story was somewhat predictable - a 'happily ever after' kind of book. It was a good read but I did get a bit bored at times.

This narrator has made a great read perfect!

I couldn't put it down even when I had to but wasted no time getting back to it. the storyline and nonstop revelations were flawless. it was delivered by this narrator in such a way that made it even more so enjoyable. I highly recommend this book.