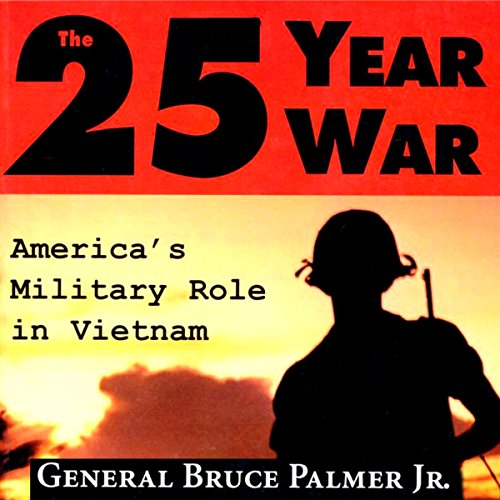 By: General Bruce Palmer Jr.
Narrated by: Gregg A. Rizzo

On April 30, 1975, Saigon and the government of South Vietnam fell to the communist regime of North Vietnam, ending - for American military forces - exactly twenty-five year of courageous but unavailing struggle. The author is a professional soldier who experienced the Vietnam war in the field and in the highest command echelons. General Palmer's insights into the key events and decisions that shaped American's military role in Vietnam are uncommonly perceptive. America's most serious error, he believes, was committing its armed forces to a war in which neither political nor military goals were ever fully articulated by our civilian leaders.

Our armed forces, lacking clear objectives, failed to develop an appropriate strategy, instead relinquishing the offensive to Hanoi. Yet an achievable strategy could have been devised, Palmer believes. Moreover, our South Vietnamese allies could have been bolstered by appropriate aid but were instead overwhelmed by the massive American military presence. Compounding these errors were the flawed civilian and military chains of command. The result was defeat for America and disaster for South Vietnam. General Palmer presents here an insider's history of the war and an astute critique of America's military strengths and successes as well as its weaknesses and failures.