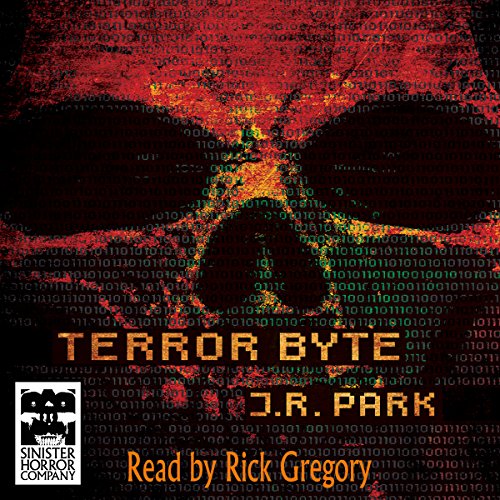 Street tough Detective Norton is a broken man. Still grieving the murder of his girlfriend, he is called to investigate the daylight slaughter of an entire office amid rumours of a mysterious and lethal computer program. As the conspiracy unfolds the technological killer has a new target. Fighting for survival, Norton must also battle his inner demons, the wrath of MI5, and a beautiful but deadly mercenary only known as Orchid.

Unseen, undetectable, and unstoppable. In the age of technology the most deadly weapon is a few lines of code.

What listeners say about Terror Byte

Terror Byte is a techno-horror about a computer virus that has been created as a weapon. A copy of the virus ends up on a USB memory stick and then gets lost, only to be found by an unsuspecting man who is curious about what might be on the stick. He plugs it in and all hell breaks loose in the office where he works.
The story follows the progress of the detective investigating the case. When MI5 and a deadly assassin also get involved, the detective starts to put the pieces together and realises how much danger he is in.

The pace of the story is quite good, although I did feel the character's personalities were sometimes conflicted, especially the assassin. I wasn't put off by that though and continued on to finish the story.

The author left the story with an opening for a possible sequel.

When Detective Norton is called to investigate the slaughter of an entire office, little did he know that it would turn his world upside down. Already grieving the death of his girlfriend, he isn't prepared to uncover the truth behind the deaths. How deep does this go?

I thoroughly enjoyed this!! The plot was fast paced and intense. Once the detective finds out about the program and what it does, it really picks up the pace. You can just imagine what that type of technology can do!! And no, I'm not telling you because it's better if you go into this blind. It's much more enjoyable, well it was for me anyway!

In all, this is a quick read, but it's a fast paced, thrilling and entertaining one. It would give you chills thinking about the program!!! If you enjoy techno-thrillers, then you're sure to enjoy this.

Rick Gregory read this really well. His cadences and tones brought the atmosphere to life and made this more enjoyable. While his voices for certain characters could do with a little more differentiation, they were still good enough that I could follow who was talking.

I was given this free audiobook at my request and have voluntarily left this review. This in no way affected nor influenced my thoughts.

I tried to like this story and listened to it twice to make sure it wasn't me. Was definitely better the second time as I was less confused but still just couldn't get into it. I think it if were longer it wouldn't have felt rushed and there would have had more time to elaborate on the story. It started out gory and great and then switched gears and became more like a mystery thriller with the bad guys in chase. All in all it was an interesting concept but didn't have all the right pieces. Can't even really say there were any characters I was especially attached to.

Rick Gregory did a great job, as always.

Ok, so I may have nerded-out on this story, as this sort of trope is one of my favorites. Bad computer program killing innocent people? Check. Stereotypical cop teams up with foreign assassin-type to save the world? Check. Well done, all around! Excellent job by the narrator, whom I've listened to before, and has done a good job with acting the characters as well as reading the lines.

I found 'Terror Byte' to be an interesting take on the concept of a 'killer computer program' and the opening scene was so intensely dramatic and thrilling that I thought this was going to be my new favorite book. I feel like Park used up all of his truly good stuff in that opening bit. The rest of the story was all downhill for me. Perhaps, if the opening scene wasn't so compelling, the rest wouldn't have seemed subpar to me. It wasn't a bad story but I probably wouldn't recommend it to my friends, only because there is better horror out there. Rick Gregory does a fabulous job, as always. I always enjoy listening to books he narrates!

I loved the idea of a killer computer program! The program can get through any firewall and take control of any electronic devices it needs to take out it's target. The program will stop at nothing until it's target is eliminated. Excellent story and great narration. The author is new to me and I'd love to hear more of his work. The narrator is a fairly new narrator I've listened to a few times. I enjoy his work, but this is probably his best so far!

A grisley book but very interesting.A downloded flashdrive is killing people,but how?A cop with a recent loss is still on the job,but not 100%.He and an operative he doesn't know goes all in to find the truth.Rick Gregory is the perfect narrator.I was given this book by the narrator,author or publisher free for an honest review.

A virus infects all the systems at an office, causing the computers and lights to vibrate at a specific frequency that kills all the workers. Inspector Norton is assigned this case.

Despite the fact that the trigger of this story is not really believable, I found it quite entertaining. I think the author did a good job creating fleshed secondary characters, and this was one of the things that kept me going.

I had troubles nevertheless with the main character. Due to the book being short, and that detective Norton was not introduced early in the story, I found it hard to connect to him and care about his background story.

Rick Gregory’s narration was very good, delivering great characters interpretations. I just have to mention a couple of noticeable audio edits. Something that surprised me was the election of an American narrator for a book set in England and written in British English. I just find this odd when it happens. Nevertheless, Rick Gregory did a great job.

Catchy title, but not much terror to the byte.

Detective Norton is thought to be one of London’s best detectives but lately he is a haunted man. Just weeks ago his girlfriend was murdered leaving him with nothing but the job which he focuses on relentlessly. Then he is called in to investigate an office building where the entire staff is found brutally murdered. His only clue is the flash drive that curiously has his dead girlfriend’s name printed on it.

I must admit I have a lot of mixed feeling about this book. It’s short, and part me feels that it works because of it. However I also feel like the hindrance of the book is it’s brevity and that it should be longer with twists, turns, and added suspense. As it stands, it is an interesting book that is never sure what genre it wants to be a part of so it takes a limitless from each. You have the grotesque beginning with the gratuitous sex scene, and then you stumble through the noir until you find yourself reading a techno-thriller.

Now don’t get me wrong, I found the book to be engaging and worked my way through the short fiction rather quickly, however this book was not one of my favorites.

Hmm. I liked the story but I feel like something was missing that would have made this story better. I liked the detective and the assassin. Another good performance by the narrator. I received this audiobook for free through Audiobook Boom for my unbiased review.

The "evil program" aspect was the main draw of this book. A mystery book where the murders are are being committed by a computer program.... that's intriguing. And the book grabs your attention from the beginning. It hits the ground running and keeps moving at fast pace. But it slowly loses steam. Turns out the "evil program" bit is used just a plot point and we don't get any nitty-gritty detail on how that thing really works. i.e. don't expect sci-fi level of details here. The book goes through phases of dull -> interesting -> meh -> wow -> ugh -> interesting sequences. (and thus, a roller-coaster).

Well, that's not totally fare. (I just wanted to use "whilest"). The narration was mostly alright, except for this repeated wrong pronunciation of whilst. There are way too many occurrences of that word in that book and the narrator kept uttering it wrong. Other than that, it was alright.