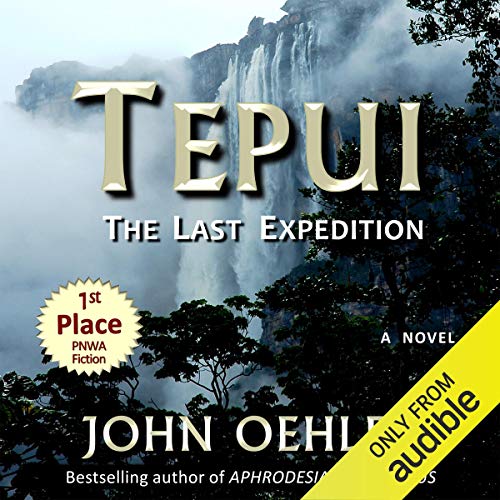 In 1559, 49 Spaniards exploring a tributary of the Orinoco River reached a sheer-sided, cloud-capped mountain called Tepui Zupay. When they tried to climb it, all but six were slaughtered by Amazons. Or so claimed Friar Sylvestre, the expedition's chronicler. But Sylvestre made many bizarre claims: rivers of blood, plants that lead to gold.

Jerry Pace, a burn-scarred botanist struggling for tenure at UCLA, thinks the friar was delusional. Jerry's best friend, the historian who just acquired Sylvestre's journal, disagrees. He plans to retrace the expedition's footsteps, and wants Jerry to come with him. Jerry refuses, until he spots a stain between the journal's pages - a stain that could only have been left by a plant that died out with the dinosaurs. Now he has to find that plant.

But the Venezuelan wilderness does not forgive intruders. Battered and broken, they reach a remote Catholic orphanage where the old prioress warns of death awaiting any who would venture farther. But an exotic Indian girl leads them on, through piranha-infested rivers and jungles teaming with poisonous plants, to Tepui Zupay - the forbidden mountain no outsider has set eyes on since the Spaniards met their doom.

This is a story about life's surprises - the challenges, risks - and how they transform us. It is also a tale of beauty and the beast.

What listeners say about Tepui

I thought the premise of the book was interesting but it became obvious from early on that this was a cheap romance novel type story and not a serious endeavor to tell a multi-layered tale. The characters were shallow, the story ridiculous. I guess if you're willing to suspend belief in all rationality, it works but not for me.

Story is somewhat childish and never really gets anywhere - other than a sophomoric love story that doesn't have any credibility at least to this reader. It wasn't bad but it wasn't good and the audio version narrator was decent but didn't add anything in the telling. Will check out future books. It be wary before buying.

As a huge fan of other books concerning the Amazon (River of Doubt, The Lost City of Z, etc.), and because of the good reviews, I was looking forward to listening to this book. However, this book is a ridiculous, cheap, romance novel that was painful to finish. The main character of the story is your typical hero who knows everything and saves the day; regardless of his actions or the impossible situation that he is in. I truly wished he would just die so that the story would end! However, (of course) he triumphs and gets the girl and lives happily ever after.....whatever. The only good aspect of this book was the performance of the narrator who read the book very well.If you like the ridiculous mindless, unimaginative, romance-type book; this may be good for you. Otherwise, I would strongly suggest not wasting your time.I am truly baffled as to why this book would ever win any award..........

Has Tepui turned you off from other books in this genre?

What does Joseph Morton bring to the story that you wouldn’t experience if you just read the book?

Don't waste your time or money

Wonderful description of Tepuis and the ecosystem around them. Fast paced exciting story. I liked Hector better than Jerry and Serena because I didn't like the romance which didn't seem convincing to me. This book would have been a five star book for me, if not for that. However the romance was easy to ignore. I would strongly recommend the book to anyone who likes interesting places and adventure. I would have also preferred a different narrator.

good narrator he was easy on the ears and loved the story very eventful ...would recommend this story

This was a good escapism book.
The author did that made me shake my head in the Scooby Doo "HUH?" Late in the story a couple of extraneous characters were introduced that needn't have been there, and one character had too many personalities to be realistic.
The narrator was very good overall, however there were some words that he mispronounced over and over again that made me laugh. The editor should've caught these. However, overall is reading was very good.
I enjoyed the writing style of the author, and look forward to reading other books that he has written.

Stories that are based in historical fact that are also legends always make for intriguing books. The audiobook was worth the credit. A couple of the main characters where sophomoric in their development and some characters that I thought should've been fleshed out more were not but if you want an audiobook for a long drive where you can listen and completely disengage - this is for you!

I kept waiting for it to start

this was okay but I was expecting something more interesting. I was disappointed on the predictable ending.

Would love yo see it on the big screen. The characters are so vivid and the ecological back drop would be breathtaking.

At every angle, he is the hero. Unfortunately that makes him essentially hollow and transparent from every view he's presented from. The story was great, and the voice actor performs his best.