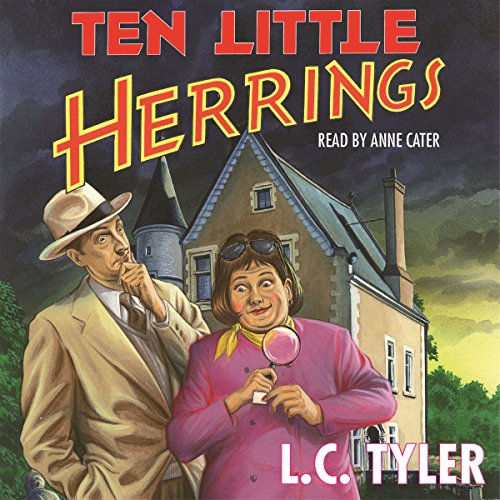 When obscure crime writer Ethelred Tressider vanishes, his dogged literary agent, Elsie Thirkettle, is soon on his trail. Finding him (in a ramshackle hotel in the French Loire) proves surprisingly easy. Bringing him home proves more difficult than expected - but (as Elsie observes) who would have predicted that, in a hotel full of stamp collectors, the guests would suddenly start murdering each other?

One guest is found fatally stabbed, apparently the victim of an intruder. But when a rich Russian oligarch also dies, in a hotel now swarming with policemen, suspicion falls on the remaining guests. Elsie is torn between her natural desire to interfere in the police investigation and her urgent need to escape to the town's chocolaterie.

Ethelred, meanwhile, seems to know more about the killings than he is letting on. Finally the time comes when Elsie must assemble the various suspects in the Dining Room, and reveal the truth...

Ten Little Herrings is a brilliantly anarchic take on the classic Country House Mystery, and an uproarious sequel to the first Elsie and Ethelred mystery, The Herring Seller's Apprentice.

Bought this whilst it was on offer but really liked it! Will definitely be listening to the others in the series.
Very easy listening.

Two would have been better

The reader and the thing I also liked least was the reader. There should have been two, one female and one male. The reading was excellent but as there were large parts that were a male narrative it would have been easier on the casual ear to have had a man to read those parts.

Would you ever listen to anything by L. C. Tyler again?

Would you listen to another book narrated by Anne Cater?

Did Ten Little Herrings inspire you to do anything?

It is fairly clear that a man is writing a narrative for a woman.