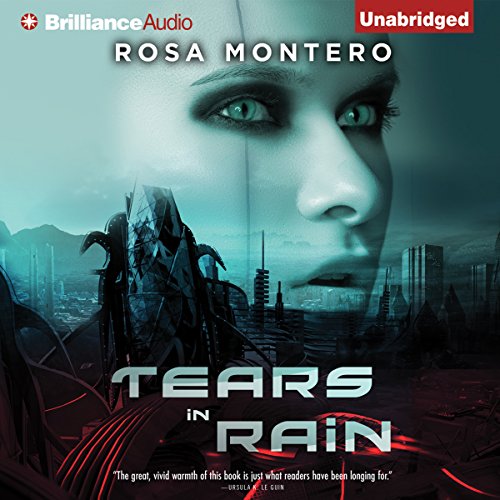 As a replicant, or "technohuman", Detective Bruna Husky knows two things: humans bioengineered her to perform dangerous, undesirable tasks, and she has just 10 years on the United States of Earth before her body automatically self-destructs. But with "antitechno" rage on the rise and a rash of premature deaths striking her fellow replicants, she may have even less time than she thought.

Investigating the mysterious deaths, Bruna delves into the fractious, violent history shared by humans and replicants, and struggles to engage the society that fails to understand her - yet created her. The deeper she gets, the deadlier her work becomes as she uncovers a vast, terrifying conspiracy bent on changing the very course of the world. But even as the darkness of her reality closes in, Bruna clings fiercely to life.

This is certainly a hidden gem in the dystopian world and it is a shame that only a few people have come across this trilogy so far. Montero is certainly a well known writer in Spain but in translation, less people may have encountered her before and this is certainly a deviation from her usual genre of books. But what a story! Intelligently crafted, relevant to current world politics, genuinely touching on the emotions in places and although it has elements of Blade Runner at times, it offers more dimensions and more of a critique on our current world affairs, including populism, the questionable practices of the media, attitudes to immigration, discrimination and all packaged in 'sort of' an investigative crime story as well. I thoroughly enjoyed listening to this book and I have the second one already lined up in my library. Can't wait for the third one to be released and to follow Bruna Husky on her next exploits. A very highly recommended read.

If you could sum up Tears in Rain in three words, what would they be?

The technology of techno 's and the T.P. parts.

What does Mary Robinette Kowal bring to the story that you wouldn’t experience if you just read the book?

She's. Vary talented women keeping up with this book you have to be openly in a zone .She pulls this off and that's not faked. It's magic together.

Yes the struggles within to cope with discrimination. Of one whom longs to be excepted.

Any book that makes me think about ideas that I have never thought about before I consider to be a strong book. The idea that a person's personality, their character, can be formed by the memories of their past, even if those memories are fake, implanted, is quite an extraordinary concept to me. I have mulled this over in my noggin for awhile now.

My wife loved this I listened to it recently and although I am pretty forgiving with Sci FY these days I found it to be kind of soapy...Maybe Just me but I thought there were some areas that were left unexplained. Pace was a bit uneven. I would recommend this to an avid Sci FI reader so you can judge for yourself...

it's not blade runner fan fiction but very close

anyone who's a fan of blade runner should consider this book, it's not as good obviously but it is still a good story that can be enjoyed as a sci-fi fan.

some of the chapters repeat. the narrator is very good. the theme is well throughout.

This writer was so adept I saw a futuristic film noir detective movie in my imagination. Each character was so well developed I could picture thier expression. I was so pleasantly surprised by the plot twist that I didn't see coming at all.

plot moves at a snails pace

this may be a very enjoyable tale for some... just not me. I simply lost interest in the first third of the first book

This audio book was very interesting and fast paced and all the characters were dynamic, interesting, and fun. The narration was great Hope some day there will be a book 2.

Would you listen to Tears in Rain again? Why?

No, I don't re-listen to books

The main character, Bruna Husky. She was complicated, flawed, smart and interesting.

Have you listened to any of Mary Robinette Kowal’s other performances before? How does this one compare?

No, I had never heard her before. This was an good performance.

really really boring... had to stop after 3 hrs

no character development. no hook in the story. boring, couldn't make it path the 3 chapter.. skip, save ur credit