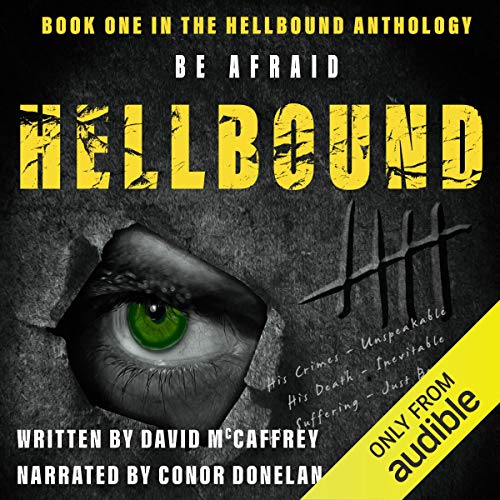 By: David McCaffrey
Narrated by: Conor Donelan
Try for £0.00

His crimes - unforgivable. His death - inevitable. His suffering - just beginning.

Obadiah Stark, aka The Tally Man, is executed at ADX Absolom, his death sentence watched by the world's media, victims' relatives and one investigative reporter, Joe O'Connell. Penning an account of Stark's personal history and subsequent crimes in the hope of determining what elements make the sociopathic mind tick, Joe discovers clues and inconsistencies which cause him to investigate Stark's execution.

While this is happening in the real world, Obadiah Stark awakens to an afterlife where he has a wife and daughter bound to his childhood hometown. Following his natural predatory instinct, Obadiah proceeds to torment the town, committing multiple murders before being gunned down by the police. He awakens to find that everything has reset, with no one recalling his murderous spree - a reality which offers no escape.

As the scenes repeat, he is forced to submit to emotions he has never experienced before...and with them a poisonous dose of morality.

"David McCaffrey's excellent debut novel, Hellbound is one of those thrillers that keeps you glued to the page while you try to imagine what will happen next. Cutting edge and Hannibal Lector-esque, it will keep you turning pages until the shocking climax." (Steve Alten, best-selling author of The Mayan Prophecy and Meg)

What listeners say about Hellbound: The Tally Man

Serial killer in a personal hell