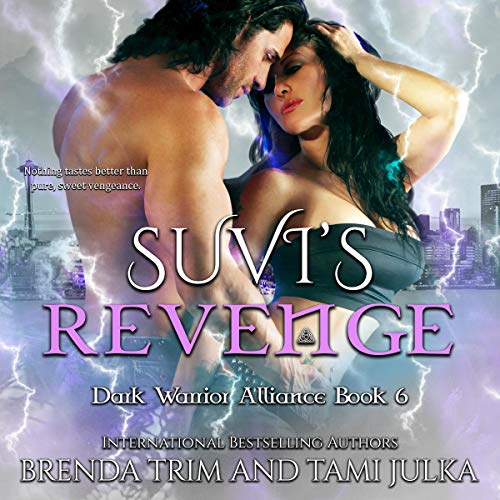 By: Brenda Trim,Tami Julka
Narrated by: Alex Black
Try for £0.00

Suvi is the youngest of the Rowan triplets and prefers high heels to combat boots and parties to battles. Unfortunately, lately, she finds herself fighting more than she does drinking martinis. If she isn’t rebuilding the business she shares with her sisters, she’s searching for their archenemy, Cele. The way Suvi sees it, they’ve done their part, and it’s time for a celebration, but that isn’t in the cards for her. The moment she has dreamt of her entire life happens when she meets her fated mate, yet she isn’t able to plan the party of the century. Instead, she and her sisters have 72 hours to investigate a murder, locate a rogue vampire, stop an evil witch from stealing their powers, and save her mate from a death sentence. She wants nothing more than to spend her days and nights in sensual oblivion with her vampire, but the clock is ticking.

Caine DuBray’s world is upended when he wakes up next to a human female that has been drained dry. As the only vampire on scene, her death is immediately pinned on him. He believes he is innocent, but the problem is that he can’t recall the details of their date. Rather than executing him immediately, the Vampire King takes pity on him and gives him three days to prove his innocence. He discovers that one of the witches he is directed to is his fated mate. Their passion sets him on fire and leaves him desperate for the chance to spend eternity with the sexy witch.

What listeners say about Suvi's Revenge

Loved the narration. Perfect for this book.

Fated Mates. Caine thevvampire asks the witches for help, concerning a murder. Oh Caine is the one accused of it.
Suvi must help Caine , the chemistry is hot.