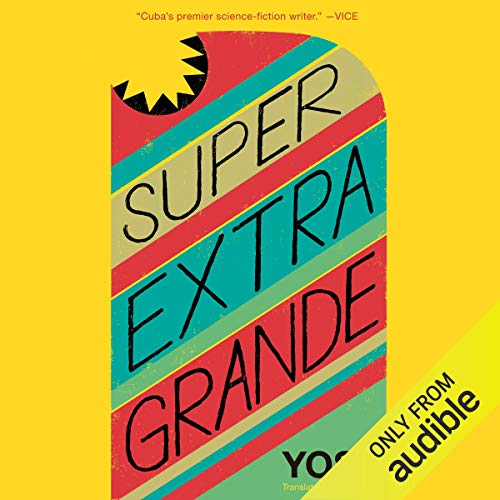 By: Yoss,David Frye - translator
Narrated by: Thom Rivera
Try for £0.00

With the playfulness and ingenuity of Douglas Adams, the Cuban science-fiction master Yoss delivers a space opera of intergalactic proportions with Super Extra Grande, the winner of the 20th annual UPC Science Fiction Award in 2011.

In a distant future in which Latin Americans have pioneered faster-than-light space travel, Dr. Jan Amos Sangan Dongo has a job with large and unusual responsibilities: He’s a veterinarian who specializes in treating enormous alien animals. Mountain-sized amoebas, multisex species with bizarre reproductive processes, razor-nailed, carnivorous humanoid hunters: Dr. Sangan has seen it all. When a colonial conflict threatens the fragile peace between the galaxy’s seven intelligent species, he must embark on a daring mission through the insides of a gigantic creature and find two swallowed ambassadors - who also happen to be his competing love interests.

Funny, witty, raunchy, and irrepressibly vivacious, Super Extra Grande is a rare specimen in the richly parodic tradition of Cuban science fiction, and could only have been written by a Cuban heavy-metal rock star with a biology degree: the inimitable Yoss.

I wanted to like this book, because giant creatures and I love sci fi from underrepresented cultures, but I just couldn't get past the sexism. I get that it was supposed to be a satire of old science fiction, but it was just too horrible. There's a reason I don't read old sci fi anymore.
Didn't even finish thinks book.

I wasn’t sure I would like this audiobook as the description was not what I usually listen to or read, the narration is very good, the story is told in the first person and the narrator captures the laid back, laconic and humorous characterisation, it was so refreshing to listen to a story that didn’t involve the usual space faring tropes or memes, my only complaint is the Spanglish is overused and really didn’t even need to be there

Not much of a story, very slow-voiced performer

The performer for this audiobook has such a low voice and slow delivery that, for the very first time ever, I had to speed him up in order to listen to it. The voice fit’s the character, who is a very large man. But still… Also, the story is pretty thin.