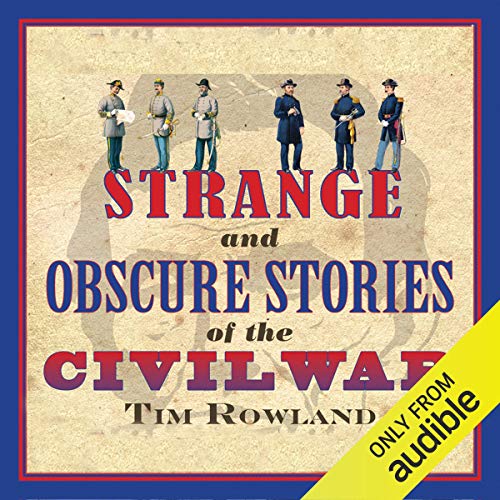 Strange and Obscure Stories of the Civil War

By: Tim Rowland
Narrated by: Fred Sanders
Try for £0.00

Tim Rowland's stories from the Civil War consist of rarely told funny or bizarre tidbits from the era. These unique anecdotes give us a chance to meet the real people of the Civil War, not just the stiff folks of the history books. While factual, Rowland's background as a humorist informs these stories and his approachable style makes them fun to hear. Fred Sanders' performance is graceful and interested; his pace is relaxed. Together, Rowland's quirkiness and Sander's elegance make this audiobook appealing to more than just the Civil War buff.

Strange and Obscure Stories of the Civil War is an entertaining look at the Civil War stories that don’t get told, and the misadventures you haven’t read about in history books. Share in all the humorous and strange events that took place behind the scenes of some of the most famous Civil War moments. Picture a pedestal in a public park with no statue on top; Rowland’s book explains that when the members of the New York Monument Commission went to hire a sculptor to finish the statue, they were shocked to discover that there was no money left in the agency’s accounts to pay for the project. The money for the statue of Dan Sickles had been stolen—stolen by former monument committee chairman Dan Sickles! Brig. Gen. Philip Kearny was the son of a New York tycoon who had helped found the New York Stock Exchange, and who groomed his boy to be a force on Wall Street. The younger Kearny decided his call was to be a force on the field of battle, so despite a law degree and an inheritance of better than $1 million, he joined the U.S. Army and studied cavalry tactics in France. His dashing figure in the saddle earned him the name of Kearny the Magnificent, probably because Kearny rode with a pistol in one hand and a sword in the other while holding the horse’s reins in his teeth. This habit proved useful after he lost his left arm in the Mexican War, because he was able to continue to wave his sword with all the menace to which he was accustomed while still guiding his horse.

This is a short book about little known Civil War incidences. Rowland looked for strange or humorous stories to report on. For example, members of the New York Monument Commission went to hire a sculptor to finish the Statues of Dan Stickle. They discovered the monies had been stolen. You will get a hoot when you discover who was the thief. I found the information about the horses interesting; such as over one million horses died in the Civil War, the life expectancy of the horse was four to six month during the War. I also thought that Rowland’s comment about the South having mostly Calvary horses and the North draft and utility horses to pull wagons and cannons interesting. Rowland claims that this reflected the industrialized North and the agrarian South. Rowland claimed that many of the northern men were poor equestrian riders but were expert at handling teams of horses and in the South, it was reversed. Most of the stories are about individual real people that helps to provide a more personal touch to the War.

The book is well written and researched. It is easy to read and full of facts. The author claims it is not a trivia fact book but I used it as such. This is a great book for Civil War history buffs or those hunting for a source book of little known trivia facts. The book is short at about five hours.

Fred Sanders does a good job narrating the book. Sanders is a stage and film actor and award winning audiobook narrator.

A great book. Engaging and informative. Will be using it in my research for a novel set in the civil war as it best describes much of the detail of the day.

This is an enjoyable bit of fluff that reveals little known but hilarious events during the Civil War. Well narrated and the author keeps the listener engaged and laughing.

When I hear "Civil War" I generally begin to find a nice place to rest my head as I'll soon be asleep. So why did I get an audio book on the Civil War then? Because I like different and strange true stories (even about the Civil War). Tim Rowland delivered these stories and Fred Sanders did a great job of telling them. I enjoyed the format, the storytelling, and the divergence from normal Civil War recounts. I was able to form a new view of 19th Century life and some of the lesser characters that made the period far more interesting.

Not what I expected, better than I hoped

Less “strange” more “obscure” as most of the stories I had never heard before. The narrator’s style was a little inconsistent but I really enjoyed this book. I’m going to re-listen to it tonite. The last chapter was fantastic and heartbreaking.

I don’t think enjoyed is the proper word sad proud and thankful. I would highly recommend this book to anyone and will. Thanks