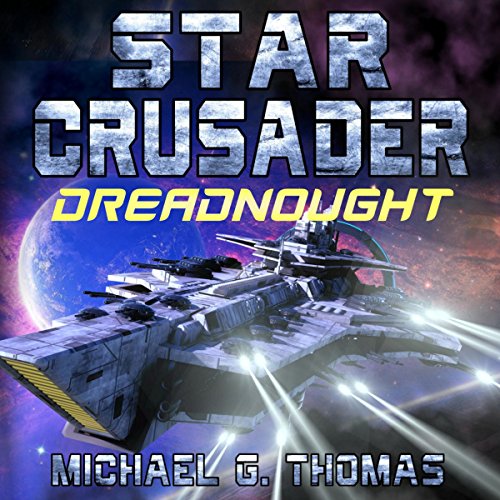 Nate and his video gamer friends are given the chance of a lifetime, a six-month tour aboard the Alliance’s newest battleship, ANS Dreadnought. She’s the first in her class, and is the most powerful ship in the sector. Bigger and better protected than any ship before her, Dreadnought carries an arsenal of deadly weapons that can annihilate a small armada and can travel between the stars in a matter of days. There is no deadlier vessel in existence.

Two years at the Academy has tested Nate’s flying, combat, and technical skills to the limit. But nothing will come close to his greatest test. Captain Gaunt, one of the Alliance’s most decorated officers plans to use Dreadnought to start a war, one that will engulf the region and cost many lives. As Dreadnought rolls out her guns to engage the very people Nate calls his friends, he has to make a decision. Does he stand by and let war spread through the sector, or will he lead the cadets in a mutiny against a beloved hero of the Alliance?

Who's up for a little violence?

After six months at the Alliance Academy, with intensive training and simulated battles, the several hundred cadets are to go on their first mission assisting the crew of the first of it's kind starship the Dreadnaught. For most it is to be their first real experience but a small handful including Jake, Rex and Billy, had already seen up close fighting and lost friends previously in battle as young teenagers. This experience was to hold them in good stead when things unexpectedly go disastrously wrong ...
A fast paced space adventure, atmospheric and exciting, with tensions building as the book proceeds.. Narrator, Andrew Wehrlen, with his usual masterful voice skills, keeps the reading level, thus increasing the build up of the anticipation of what is to come.
An excellent read for young and older S.F. fans alike.
My thanks to the rights holder who freely gifted me a complimentary copy of Dreadnought, at my request, via Audiobook Boom. Although part of a series, it is not essential to have read the earlier books.

I really really enjoyed this book, the charactes are likeable, the story was intriging and kept you wanting to listen for the next bit. Even though I have not read any other stories from this series I did not feel lost at anypoint. I look forward to listening to more from this series in the future.

Another good story from the mind of Michael G. Thomas this is his latest adventure based in his Star Crusader universe and is no 8, so the backstory is quite involved with many a war previously fought.
This is a well crafted story and is typical of his previous work. The only fault lies in the sheer level of data and a sometime confusion between simulation and what exctly our main hero Nate experiences. In book format this is more easily solved by checking back something that these type of books struggle with in audio.
In this case the skills of the narrator Andrew Wehrlen are tested and he does a great job dealing with this.
However it does fall slightly short of the 5 stars but comes close to it. A bit of attention is needed but a worthy buy.
This audio was gifted and requested by me and i choose to leave an honest review and as such is my own opinion.

The book started slow but it picked up as it progressed. I kept thinking the author would bring something new or a twist that I did not see coming but unfortunetly not. This book for me is predictable, however, it is not a bad read and others might like it.

What disappointed you about Star Crusader: Dreadnought?

The book offers nothing new from sci-fi story perspective. The story here is pretty basic and juvenile. It follows a formula and doesn't deviate much. At no point did I feel wowed. Please note that there's nothing particularly "wrong" with the story. It's just - not exciting. I've read such stories numerous times and I could tell what would happened next with my eyes closed. The characters too were on-dimensional with clear good vs evil tropes.

If you could sum up Star Crusader: Dreadnought in three words, what would they be?

They way they got to the ending was enjoyable enough but was basically predictable.

Which character – as performed by Andrew B. Wehrlen – was your favorite?

The narrator was the star of this production. The characters all sounded the same for the most part but his voice was splendid. I would definitely listen to him more and he does have a hint of range. The story sounded more like a diary of a cadet.

I did enjoy the story. Just found it to be typical. I did like the touch about virtual reality though. Just did not feel actionay enough.

A great YA sci fi . A little slow starting, but picked up steam. A very enjoyable and entertaining listen.

Enjoyed the book. If you are into space battles, deception and heroes, this is a book for you. I thought it was worth the listen and a credit.

This book provided at no cost for a fair and honest review.

The narrator did a good job, but it took a while to get used to his fast pace. The story itself started slow, but got more interesting. I would classify this as a juvenile, with simplistic plot and characters. The parallels to present day politics were too obvious, as well as the author’s leanings. The main “bad” character summed up his philosophy as “Humanity First”.

the star was a little bit slow but...

the story was good.. but the start of the book was slow .. it was a nice si-fi and I enjoyed it quite much the fantasy description we're very vivid a movie like.. the story line it self was nice

Good space opera for a drive.

Would you listen to Star Crusader: Dreadnought again? Why?

I'm not sure I would listen to Star Crusader: Dreadnought a second time if I were reading the series. This is the type of series I collect and, when they are complete, I binge read it.

What was one of the most memorable moments of Star Crusader: Dreadnought?

The story flows smoothly from action to action after a slow start. The action subtly builds with out jilting revelations or twists. It is a very smooth read.

What does Andrew B. Wehrlen bring to the story that you wouldn’t experience if you just read the book?

Andrew B. Wehrlen does a yeoman’s job reading the book to us. I am a fan of his, and I know he does better. I believe the speed of the audio is a major contributing factor. My impression tis the playback was speeded up. I have never liked the machine gun feel of dialogue and storytelling at even 1.10 X normal. This performance feels like that.

The story reminds me of some of R. A. Heinlein’s juvenile works. That’s not to say the themes, war, death and betrayal, are particularly juvenile. The situations that precipitate the young cadets into making life and death decisions are pushing contrived. The characters are two dimensional, but lack of character development is almost a hallmark of YA fiction. The science is almost anachronistic for warships in the interstellar arena with barely a nod to AI.
With the negatives out of the way, the story itself addresses issues of race hatred and bigotry in a manner that does not browbeat the reader.