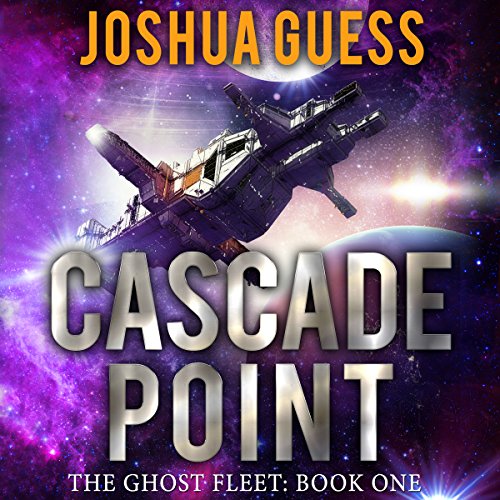 Grant Stone and his crew just want to be left alone. They fly at the edges of Alliance space, surveying new systems far from the problems that brought them all together. Some are former military, while others have more colorful pasts. Everyone aboard the Fallen Angel has a reason for staying on the fringes. It's a good life, but a chance discovery will change everything.

Confronted by an enemy powerful enough to threaten all of human civilization, Grant and his crew are forced to choose between confinement or joining the Ghost Fleet, a hidden network of ships recruited and run by the Alliance Navy. Faced with an existential danger, Grant will lead his team into the far reaches of unknown space to keep the brewing conflict from exploding into all-out war.

What listeners say about Cascade Point

If you could sum up Cascade Point in three words, what would they be?

What other book might you compare Cascade Point to and why?

He helped develop the story with his performance.

A good science fiction with the military

This book is a good book especially if you are a science fiction fan and also a military enthusiast. The characters are very realistic. There is secrecy..a little romance...and of course action. I would recommend this book to every science fiction fan. It is well worth the listen even if it is militarily related. The narrator did an very good job bringing the characters to life. I was given this free review copy audiobook at my request and have voluntarily left this review.

I was disappointed with this book. I liked it to begin with. I thought this is going to get better but it sort of went flat for me after a certain time. I think this is more to do with the characters then the plot itself which I really liked. Also this book has a lot of profanity which I believe it did not need, I felt it was forced at times and I have to admit it did put me off.
However, others might like it a lot more then I did.
Would I read the next book in the series? The strange thing is I would say Yes. There is something about it that I liked but hated at the same time.

I liked the narrator, I thought he did a great job in voicing all the characters.

After listening to the first couple of chapters I though "This is about to get good." All the pieces were there. After a few more chapters I thought the same thing "This is about to get good." Then the book was over and....meh. There is a good plot in there but it seemed to be glossed over or avoided in favor of a YA feel. This could have been good. I can not recommend this one.

Off to a Great start

This one was interesting from the start. Book has a little slower pace but is interesting and active from start to finish. Book can stand alone but is definitely a great start to a can't wait to see series.

Enjoyed the narrator as well. He was a great fit for this story. Will definitely look for him on more novels.

Very exciting and a mad rush. Terrific character builds. This book/series has a great spread of individuals (I hope all survive to the end). I highly recommend this book/series. Bravo Zulu Joshua. Now for the obligatory: "I was given this free review copy audiobook at my request and have voluntarily left this review."

I loved this book! I have already started following Joshua Guess on Amazon based on this book. The story is well thought out and the science behind it seems believable (stated from an unscientific mind). I really liked the characters and I am looking forward to them getting more fleshed out during the series. The next two books are available on amazon as paperbacks and on kindle.....hopefully Audible and Andy Harrington will get to work on these too. The narrator did a great job bringing this book to life.

A New Take on a Classic Genre

A compelling and we'll narrated story about space, a ragtag crew of former Navy, and their adventures in the "technically does not exist" Ghost Fleet. Plenty of action, a bit of romance, and a whole lot of interesting thoughts about the nature of life.

Fun read. Our plucky crew is trying to stay on the edges of civilization, but when they discover something new and potentially dangerous, they must trust the very government they wished to avoid.

**I was provided with a free promotional copy of this book, at my request, and voluntarily left and fair and honest review**