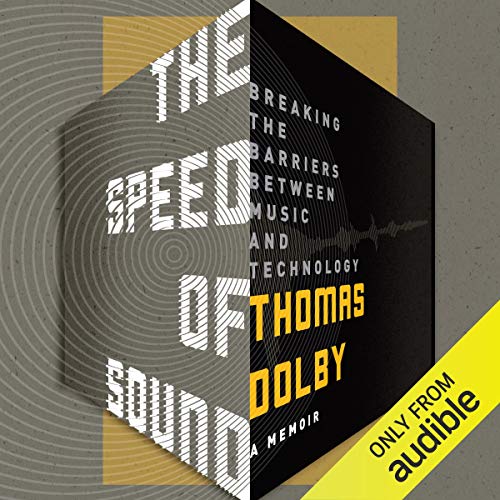 The remarkable story of rising to the top of the music charts, a second act as a tech pioneer and the sustaining power of creativity and art.

Thomas Dolby's hit songs 'She Blinded Me with Science' and 'Hyperactive!' catapulted him to international fame in the early '80s. A pioneer of new wave and electronica, Thomas combined a love for invention with a passion for music, and the result was a new sound that defined an era of revolutionary music. But as record company politics overshadowed the joy of performing, Thomas found a surprising second act.

Starting out in a rat-infested London bedsit, a teenage Thomas Dolby stacks boxes by day at the grocery and tinkers with a homemade synthesizer at night while catching the Police at a local dive bar, swinging by the pub to see the unknown Elvis Costello and starting the weekend with a Clash show at a small nightclub. London on the eve of the 1980s is a hotbed for music and culture, and a new sound is beginning to take shape, merging technology with the musical energy of punk rock. Thomas plays keyboards in other bands' shows and, with a bit of luck, finds his own style, quickly establishing himself on the scene and recording breakout hits that take radio, MTV and dance clubs by storm. The world is now his oyster, and sold-out arenas, world tours, even a friendship with Michael Jackson become the fabric of his life.

But as the record industry flounders and disillusionment sets in, Thomas turns his attention to Hollywood. Scoring films and computer games eventually leads him to Silicon Valley and a software start-up that turns up the volume on the digital music revolution. His company barely survives the dot-com bubble, but finally even the mavericks at Apple, Microsoft, Netscape and Nokia see the light. By 2005 two-thirds of the world's mobile phones embed his Beatnik software.

Life at the zenith of a tech empire proves to be just as full of big personalities, battling egos and roller-coaster success as his days spent at the top of the charts. The Speed of Soundis the story of an extraordinary man living an extraordinary life, a single-handed quest to make peace between art and the digital world.

"He rose during the advent of the British New Wave. But what was he, exactly? A singer-songwriter? Performance artist? Programmer? Engineer, poet, actor, inventor? And if we couldn't be sure, how possibly could he? This is the engaging, emotional, funny and surprising tale of Thomas Dolby - a brilliant multi-hyphenate on his journey of discovery and self-discovery." (JJ Abrams, director, writer, producer)
"Musician Thomas Dolby debuts with an absorbing account of his pioneering work merging digital music with film, technology, and science. In this story-filled memoir, Dolby draws deeply on his experiences as a synthesized music guru and early internet geek, offering wonderful scenes involving such notables as Michael Jackson, Joni Mitchell, David Bowie, Steve Jobs, and George Lucas. His innovative accomplishments, rendered in fascinating detail here, are legendary. This stellar book will appeal to readers interested in modern technology's startling effects on music and popular culture." ( Kirkus)

What listeners say about Speed of Sound

This is probably the best autobiography from a former rock/popstar. Thomas Dolby is so much more than that implies. Compelling listening...

I loved each story leading up to TMD’s present day.
What’s next for this often overlooked master?

Pretty much listened to this book from start to finish. Happy moment when I heard it was actually narrated by Thomas Dolby himself.

Awesome and honest stories from the 80s synth era

Dolbys stories from Michael Jackson to Bill Gates were fascinating. What a life he had!

Part 1: Exactly what I was expecting, TMDR’s career as a musician. My advice is to have your music app fired up and play the song as he mentions it, it adds so much colour and richness to the experience.

Part 2: Lots of stuff I didn’t know about TMDR, a fascinating story, loved every minute of it.

This is possibly the best music autobiography I've ever read. Even if you're not a fan of Dolby's music it's a fair bet you've heard his signature other-worldly, sweeping synths on such tracks as Foreigner's 'Waiting for a girl like you' or Bowie's Live Aid 1985 set.

I'll admit I have a bad habit of skimming the opening chapters of a biography, eager to get to the meat of the story, I don't much care where they went to school or what their pet dog was called. No such problem here as Dolby kicks off with his first 'proper' job in a band, playing for the much-underrated Bruce Woolley and The Camera Club in the early 1980s. This led to a tour with Lene Lovich, which led to a meeting with Foreigner, and away he goes.

But this is no tale of rags-to-riches pop superstardom; far from it. With each success comes a corresponding challenge that leaves Dolby thinking that Fate is out to get him. On the eve of starting a 30-date USA tour to support the excellent "Aliens Ate My Buick" album, his record company (EMI) call to say they're not sure how to pigeon-hole his sound and this is affecting their marketing efforts. Consequently, rather than put some actual effort into solving the situation, they're withdrawing support (and backing) for the tour.

In the mid 1990s Dolby just gives up on the music industry. He's sold millions of albums and yet is still struggling to get by, and so Part Two of the book tells the tale of his venture into the world of high-tech business, and what a roller-coaster that turns out to be.

I've been a fan of Dolby's work since the 80s, and found parts of the story would cause me to visit Spotify to relisten to his music, only now with a far better understanding of what the songs are about.

Dolby narrates clearly and very engagingly throughout, and comes across as a very decent, honest man, swimming against the tides of corporate America.

A highly recommended peek into the worlds of the American music industry and Silicon Valley.

And you are going to love the Stevie Wonder story...

Very much at the speed of reality.

Like the old lifeboat he works in, Dolby's career has been tossed around in the storm that was the first dot com boom. Does it come right? A very atypical rock autobiography. No boring tales of bachanalia here. Unless you are interested in a personal history of music and tech in the 80's and 90's it might not be for you. His homes keep collapsing. He reads very well.

i love you goodbye

loved this book, can't recommend it enough! The ups and downs of the music and technology industry so well explained with Thomas great narration style.

Brilliant career history of Thomas Dolby the musician and techie. In two parts it describes his musical and internet enterprises.

In music and tech, such an instinctive perfectionist, thoughtful and perceptive. This is a story of creativity fights commercial greed, and how technology leads us forwards in ways we can never predict. I grew up with Thomas' music, my vinyl of Flat Earth and Prefab Sprout's Steve McQueen sit in a cupboard in England, worn thin. I play the guitar, engineer, mix other folks' music, fix arrangements, every day, striving for... maybe I caught this bug the moment I heard the opening bars of "Bonny". The book is an inspiration for anyone who writes or loves music, or indeed works in tech innovation, so thank-you Thomas, your boat studio sounds waaaaay cool x