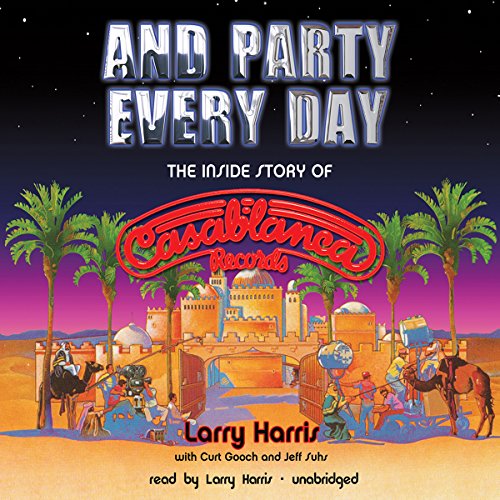 And Party Every Day

Now it can be told! The true, behind-the-scenes story of Casablanca Records, from an eyewitness to the excess and insanity. Casablanca was not a product of the 1970s, it was the 1970s. From 1974 to 1980, the landscape of American culture was a banquet of hedonism and self-indulgence, and no person or company in that era was more emblematic of the times than Casablanca Records and its magnetic founder, Neil Bogart. From his daring first signing of Kiss, through the discovery and superstardom of Donna Summer, Village People, and funk master George Clinton and his circus of freaks—Parliament-Funkadelic—to the descent into the manic world of disco, this book charts Bogart’s meteoric success and eventual collapse under the weight of uncontrolled ego and hype. It is a compelling tale of ambition, greed, excess, and some of the era’s biggest music acts.

“The book contains detailed evidence of the chaotic manipulation of the music charts in the wild days before computer scanning. This fell mostly under Harris’ purview, and he offers fascinating insight on what these legendary ‘promo men’ did back in the day.” ( L.A. Weekly)

What listeners say about And Party Every Day

This audio book was superb in my opinion.

I’ve always enjoyed the artists,and music that happened to come through Casablanca Records. Donna Summer, The Village People, Kiss, Pattie Brooks, Cher, Love, & Kisses. SantaEsmeralda, Parliament etc. The list of artists are so long; I could go on forever. Much of the behind the scenes in regards to the artists is covered in a very raw, and in your face way.
The narrative style is refreshingly unapologetic. This audio book is Juicy, and let’s it all hang out with a kind of a-matter of fact in its delivery to the listener.
Being a huge fan of all kinds of music, and being a big fan of the late Donna Summer I would buy all of her music. The fact that Donna Summers music just happened to be part of the Casablanca music catalog was just a normal reality at the time. Through my love of Donna Summers wonderful Disco hits, I began to check out other artists that came out of Casablanca Records. During that memorable time in my youth; I began to notice that so many of the big hits of that point, and time where coming from Casablanca Records. The music always satisfied my ears, as well as getting my body into the groove.
Casablanca Records always delivered big time!! I kid you not.
If you where a thriving young party animal, as I was during the 70’s and 80’s you’ll know just what I mean. 😜👍
This audio book truly gave my minds eye a clear image of all the behind the scene workings of the Casablanca Record Company, and all of it’s players during its hay day. Mr. Larry Harris narrated this audio book so perfectly that I could almost feel the atmosphere, and mood in each chapter. There is no denying that this audio book was worth my time, and was a true ear full of sweet tidbits on the staff, and artists of Casablanca Records at that time. I had no idea that there was so much more to Casablanca Record Company, and that so much was going on behind the scene. This audio book takes the listener from the infancy of Casablanca Records to Casablanca Records 21st Century style, and it’s change of hands. One thing is certain as far as I’m concerned.; this Audiobook was truly enjoyable. And Party Every Day: The inside story of Casablanca Records delivered hours of entertainment.
I simply loved it!!

Being a child of the seventies, and a huge KISS fan for most of my life, this book is great. A lot of background, behind the scenes stuff that we fans didn't know, told by a guy who lived it.

If I wasn’t a huge KISS fan from the 70s I never would have listened to more than 20 minutes of the book.

But I was and so I stuck with it until the end.

You’ll gain some insights into the behind the scenes of KISS, Donna Summer, The Village People and many others.

You’ll hear about the excessive drug use, some details of the record business and that Neil Bogart had a vision and commitment to grow a company but the inability to really lead one to amazing heights. Let’s face it, it’s a tough business.

This should be curriculum for music schools and start up record labels. Great book from start to finish.

Larry Harris, the author and peripheral subject of this book, has the perfect voice and persona to deliver this content. This New York Jew delivers it with the perfect inflection and understanding of its content, since it is his. The story itself is interesting and, while over the top, is put perfectly in perspective by Harris. I highly recommend this book.

A very entertaining listen from the guy who was there

This book turned out to be way more informative than I expected. The author has a great speaking voice and the story is amazing. I had always heard that Casablanca was a crazy place but would have never imagined that a major record label could operate the way they did. What they did and how they did it could never happen today. Highly recommend if you have any interest at all in the record business or 70’s music.

I remember fondly the music of the late 70s, disco and rock n roll, Donna Summers and the Village People. The author/narrator made it feel like you were there, at the 24/7 party that was Casablanca in its heyday.

As a music industry professional I highly enjoyed this book and found it both entertaining and educational.

Really interesting read. Not just refoyiggs of bacchanals but he actually talks about things to do with music biz. I think it’s probably a book better for musicians or someone Background. I recommend it.