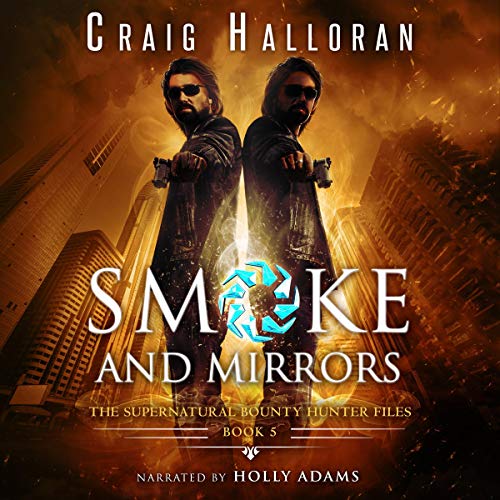 With John Smoke now free from prison, Sidney Shaw's life doesn't get any easier. No longer an FBI agent and with the bills stacking up, she takes up the bounty hunter business. Together, she and Smoke go after another villainous fiend on the Black Slate.

Success quickly turns to failure as Congressman Wilhelm is shot and video evidence reveals John Smoke as the shooter. The manhunt for Smoke begins, and Sid's life is turned upside down trying to exonerate the man she thinks she loves.

Did he do it, or is it all a bunch of smoke and mirrors?

Keeping the faith in her man, Sid fights to save Smoke before the Drake gets to him first.

What listeners say about Smoke and Mirrors

A riveting instalment that tugs a little on the heart strings.
Interesting characters and just why are the drake so interested in Sidney?
The intrigue continues

Worthy listen with interesting foes and likable lead characters. Entertaining storyline with plenty of action. The narrator did a great job! I received a free copy of this audiobook at my request and have voluntarily left this review.

Fans of supernatural will love it!

Whoa! Not the ending I was expecting and now I’m on pins and needles. Binging the next book now! Great supernatural series! Better if you start from the beginning