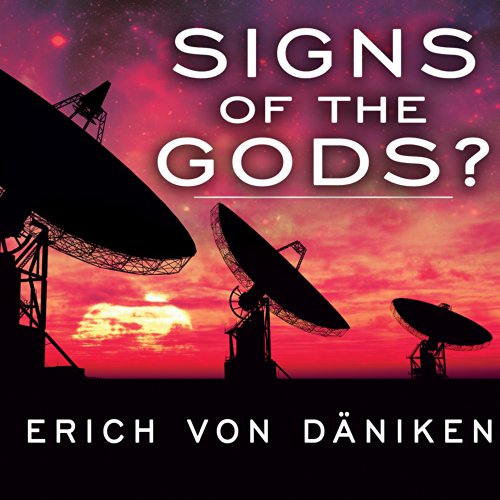 Signs of the Gods?

By: Erich von Däniken
Narrated by: Peter Berkrot
Try for £0.00

Were human beings created by powers from outer space? Did extraterrestrial giants build the megaliths of Malta and the menhirs of Brittany? Was the Ark of the Covenant a machine built by the astronaut gods?

In Signs of the Gods?, Erich von Daniken travels far and wide around the globe to study the many strange phenomena that all point to one conclusion - that many thousands of years ago, Earth was visited by a race of superhuman powers and intelligence. The questions he addresses along the way include:

Erich von Daniken's Chariots of the Gods provoked a worldwide storm of controversy. In Signs of the Gods? he produces powerful arguments to support his theory of astronaut gods, with evidence that is difficult to explain any other way. Hear what he has to say with an open mind - and you may find yourself agreeing with him.

What listeners say about Signs of the Gods?

Fascinating Continuation of Connecting the Dots...

Would you listen to Signs of the Gods? again? Why?

Yes, I would listen to Signs of the Gods again and in fact I already have. Very often I listen to books while driving and of course cannot take written notes.

What other book might you compare Signs of the Gods? to and why?

I would compare Signs of the Gods with Gold of the Gods because the data Erich von Daniken presents continues to build in tempo until the dots paint a picture that is undeniable.

Which character ??? as performed by Peter Berkrot ??? was your favorite?

Although I didn't have a favorite character, I thought the performance was just fine.

If you could give Signs of the Gods? a new subtitle, what would it be?

I wouldn't give it a new subtitle.

I thoroughly enjoyed Signs of the Gods and would recommend it to anyone wanting to explore changing the current paradigm.

I think it's time.

I think it's time. Time for all people in the world to open their eyes and open their minds. Including all religious leaders and followers to speak truthfully about our history. Also make public the secret books files and documents. I think we're old enough and smart enough and can accept anything as long as its the truth. This was only my 4th audiobook so far and my third that was written by Erich von Daniken. Over the last several years I've I watched many shows on UFOs and Stonehedge and the pyramids and Erich von Daniken is in most of them and because of the way he asked the questions and shows the evidence is the only reason that I've read or listen to any of his books. The narration was good and the contents of the book was presented well. I think we need to keep praying to our Creator and giving thanks for all the blessings we humans have received. Doesn't it make Jesus a hybrid, because his mother was human and his father was a God ........or Alien? Who cares ........we were made by divine entity. I'm just happy to be here and be part of the plan. Whatever my purpose in this life is. Amen

This book kept me entertained, all the way through. Very interesting, indeed. I would highly reccommend this book to others. Especially if you already know of his work.

Pretty good. Not as good as some of his others but still fun to listen to.