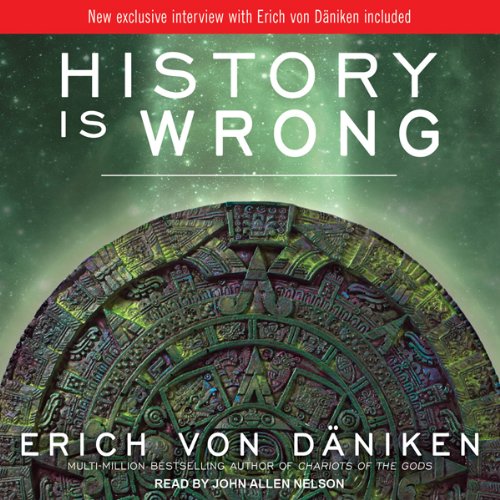 Erich von Däniken again shows his flair for revealing truths that his contemporaries have missed. After closely analyzing hundreds of ancient and apparently unrelated texts, he is now ready to proclaim that human history is nothing like the world religions claim---and he has the proof! In History Is Wrong, von Däniken takes a closer look at the fascinating Voynich manuscript, which has defied all attempts at decription since its discovery, and makes some intriguing revelations about the equally incredible book of Enoch.

Von Däniken also unearths the astounding story of a lost subterranean labyrinth in Ecuador said to be home to an extensive library of thousands of gold panels. He supplies evidence that the metal library has links not only to the Book of Enoch but also to the Mormons, who have spent decades searching for it, believing it to contain the history of their forefathers. And what about the mysterious lines in the desert of Nazca that resemble landing strips when viewed from the air? Archeologists claim they are ancient procession routes. "Think again!" cries von Däniken, as he reveals the data that the archeologists never even thought to check. History Is Wrong will challenge your intellect---and maybe a few long-held beliefs, too.

What listeners say about History Is Wrong

What disappointed you about History Is Wrong?

The narration is so quick you don't have any time to take in the proposed ideas. And much as I like Von Daniken books, he asks so much of the reader here while saying every other idea that asks something of the reader is just wrong. Sans explanation why his should be the only idea you think of. At the end of the day they're all theories, but he doesnt even attempt to justify why his is the correct one.

Has History Is Wrong put you off other books in this genre?

Who might you have cast as narrator instead of John Allen Nelson?

His other books are better.

Personally I prefer his actual theories to his angry rambling but interesting all the same.

couldn't finish more like a good old moan from EVD on how he's been treated over the years. Narrator is just awful, speaks too quickly. really really bad choice.

yeah good informative info worth knowing, will listen again 👍 many years make this guy worth listening to.

If it was a book , l wouldn't put it down. When l first heard of EV Daniken l thought he was a nutcase!
But l decided to have an open mind.
Four books later and l have completely changed my mind.
I would recommend this and all other books of his. As a boy l saw the markings of Nasca and thought, airport! That memory is indelible
Glad l listened..

history is most certainly wrong but so is mr von daniken .muddled and incoherent some might like his rambling style but not me.

Von Daniken has been one of my favorites for years now. He courageous, incessantly inquisitive, and a smooth talker. It was, therefore, with some excitement that I began listening to this book - ready to receive the mysterious knowledge like an after dinner treat.
When Erich began about the Voynich Manuscript, I heard myself exclaim"Yippee."
It all became more intriguing when he brought Crespi's treasures and the Book of Mormons into play and I thought to myself "well this is going to get really interesting!".

Alas, Erich never brought the loose ends together; repeatedly getting off-track with sanctimonious recriminations against those who have treated him with disdain in the past. Of course, I get his frustration with the scientific community and his disgust with the lies and the attempted attacks at his credibility. However, if he wanted to write a book about that, then he should have called it like "The Abuse of Scientists Against Erich van Daniken", or something similar. Of course the title conveniently allows him to address his grievances surreptitiously, but I didn't appreciate his slight of hand at all.

In spite of repeated promises throughout the book to address the Voynich Manuscript enigma, he never does so, and conveniently lets it go for the last 50% of the book. So, after reading Erich's abbreviated notes on Voynich, what one knows about the manuscript is less than what can be gleaned from Google during a quick 5 minutes browse.

His frenetic hither and thither weaving seems to be specifically designed to confuse the reader into not noticing the large gaps and holes in his arguments and attempts to "set the record straight." Perhaps van Daniken should stop penning books now, or get a decent editor to read his work, and point out the vacuities in his arguments and prose.

An assault to the ears

What disappointed you about History Is Wrong?

While the topic was intriguing the narration was hard to sit through, I kept hoping it would be less explosive as time went on but no such luck. Im not sure if he doing his imitation of the author or the newsreels of the 1930's.

Would you recommend History Is Wrong to your friends? Why or why not?

I'm afraid I would not recommend to my friends.

I personally love the subject/topic of discussion.
but both the writer and narrator are boring me to sleep. quite literally. i was driving and fell asleep.

as always with evd, fascinating stuff here. bad narrator, but you get used to it.

Whoever thought this narrative was would make this rambling sound better has a very unique sense of taste. Play the sample , the persons yells like an old senior citizen with Alzheimer's. This book was very difficult to listen to. If you are interested in this alien influence subject just invest in chariot of the gods.

The narrator kept me entertained. The story flowed and was informative. One of my favorite parts was the comparison of stories from scripture to history.

Was a hard listen.

Made it a couple chapters in and gave up on it. The author came off pretentious and the story dragged. Wouldn't recommend.

Respect for the author but not always a pleasant read

I have huge respect for the author, as for anyone who sticks out his/her head and dares to push hypothesis forward into the science community that are way ahead of time and challenge current beliefs. I am aware those people run the risk to get mocked, lose credibility and even their jobs and licenses sometimes.

However, the anger about this, can be felt throughout the whole book and that wasn’t pleasant.

The interview at the end made up for it! He seems like a very nice guy. It was nice to get to know the guy who first launched the hypothesis of ancient astronauts.

Struggled to finish the book when I hit chapter 4. Von Daniken seems to rant about how he was unfairly treated by the media. Yes, he was, but it goes on and on. I feel the book was written to send a rebuttal to his attacking contemporaries and the media. He also does not read the book. Good because I didn't miss understand a word. Bad because I had to keep telling myself that he wrote the book. There is something loveable about him, but not. without him reading the book.

Interesting but not great

I enjoy listening to different perspectives on things, and this was a significantly different point of view from the sorts of things I believe to be true, so I was willing to give it a listen.

Personally, I can't speak for the authenticity of the accounts made in the book, but there were both veiled and direct insults at various religious groups for seemingly little reason. I understand the writer is likely frustrated at some of the opposition he has faced if his claims are to be believed, but it's extremely hard for me to even give him basic courtesy when he goes to the needless effort to belittle anyone who disagrees with him. He has likely faced much persecution for his claims, and I do feel genuinely awful for what misery he has been put through. Life is hard for anyone who is willing to see the world from a unique and different viewpoint.

What I did notice though, was some pretty significant lapses in logic when it came to deductive reasoning of his own opinions, while being strictly harsh on any conventional wisdom. I can't think of the direct examples that I heard, (I can try and find them if anyone requests them). If I recall, it was something to the affect of, "If you can believe that Y _could_ be true, then why not at least admit that X _must_ be true!?", then later discounting the opinions of 'unbelievers' by stating that they make leaps of logic without evidence, or making claims only on assertion. That they were dogged in their belief without sound reasoning. It was frustrating.

Most annoyingly of all is that there is this repeated pattern of reasonable explanations for everything. "I don't have photos of that because of this." "I saw it with my own eyes, but the people who saw it with me are dead." Etc. Again, if I am remembering correctly, there was even a claim that went so far as to say that evidence that he possessed has straight up been _stolen_ from him by some quasi-mysterious government officials. It's not that I don't believe that someone can't be robbed of important findings - I'm sure that happens often enough - it's that it seems to be this long, never ending stream of one thing after another. Conspiracies exist, sure...but global, cross-national governmental conspiracies all conspiring against a single man? Really?

Anyone who has dealt with pathological liars will see some striking similarities between their, and this authors ability to both make: fantastic claims, have no evidence to back up that claim, regularly find _new_ evidence on even _greater_ claims, become agitated at anyone who does not blindly agree, and hyper fixation on the importance of their "findings" - those findings, of course, having them as the absolute center of the narrative and being of earth shattering importance. They become the main character in their own made up world. That is exactly the same sort of experience I got when reading this book. And it's the cheesiest, most cringe-inducing thing I've ever read.

I encourage you: consider, reconsider, and analyze everything. Question as much as you can, from as many people as you can. Heck, question this very review! Be willing to listen to many different points of view - this writers view included - but decide for yourself. Question not just the motive, or the need, but the clear and present facts presented. This author provides none, but an ever greater list of strung together plot points wearing the mask of a book.