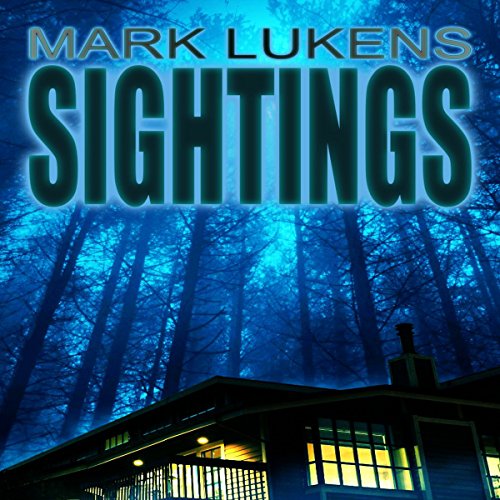 By: Mark Lukens
Narrated by: Teri Schnaubelt
Try for £0.00

A sci-fi horror book in development to be a feature film....

In 1988, Lydia Conner was taken from her cabin near Specter Lake, Minnesota, while her husband lay in bed, temporarily paralyzed. She screamed at him for help as she floated up to the ceiling in a blinding flash of light...and then she was gone.

In 2009, four film school students journeyed to the Specter Lake cabin where the abduction of Lydia Conner took place. They hoped to capture proof of an alien visitation on film; they hoped to re-create events from the abduction; they hoped to use themselves as bait...but they encountered much more than they ever could've imagined.

What listeners say about Sightings

On reading the blurb, I initially thought that it would be one of those books, you know the ones that are done to death!! 4 friends head to a cabin miles from anywhere in the hopes of proof of what happened there, nothing new there, been there done that! But when I say that it was narrated by Teri Schnaubelt, I knew I had to listen. I always enjoy her narration and find that she can bring any story to life. Well, this is no different. She nails the performance, and I think helped me enjoy this a lot more that if I read it!

The plot doesn't really have anything new. Though I did love the "Alien" they had guarding the door of the cabin! ;) It's a fairly fast paced read and there is plenty tension throughout that will keep your attention. It was predictable at times, but it didn't really take away anything from the overall feel of the book. It's a solid abduction book, with a few small twists thrown in.

In all, a quick and exciting read. It wasn't ground breaking, but it did entertain me, and that's good enough for me.

*I received a copy of this for review. This in no way affects my thoughts.*

What a pleasant surprise

I usually don't like alien abduction books but this one really surprised me. So much so that I've purchased a totally different book from the same author.....bad reviews on it or not I like this guy! John is working on his thesis. He recruits his girlfriend Veronica, his best friend Drew and the star of his movie about alien abductions......Fran. years ago Fran's father was paralyzed in bed while her mother was dragged & abducted by a blinding blue light at their cabin. The same cabin John has brought everyone to. Fran tells her story. Her mom disappears & returns.......pregnant. She's never really the same even though she doesn't remember anything about the two days she was missing. Is Fran's father's story bogus? Did her mother simply abandon them. Better yet is Fran 1/2 alien? Almost immediately strange things start to happy. Bats commit suicide, mutilated animals....the only animals they really see or hear, footsteps on the porch of the cabin, camera's don't work etc. Did John set it up to make his film more sensational. Awesome narrator, great plot, characters seem real. great all around book.........go for it!

If you could sum up Sightings in three words, what would they be?

I couldn't pause this audio book It kept me on the edge of my seat! One of the most creepiest sci fi book I definitely recommend this book to anybody who loves scary or supernatural things.

Not your usual alien abduction

Was a totally different alien story. First time I've ever read about one based in the Northwoods of Minnesota. Teri did a great job of making the characters realistic.

What made the experience of listening to Sightings the most enjoyable?

What was one of the most memorable moments of Sightings?

The prologue, or very beginning.

Have you listened to any of Teri Schnaubelt’s other performances before? How does this one compare?

Yes, several, and, compared to the others I've listened to, this is the best one yet.

Received for an honest, unbiased review.

If you could sum up Sightings in three words, what would they be?

John, because he was so dedicated to his project.

When the car would not start and Drew was so sure John did something to it.

When Drew is in the light and could not move, sad.

This book was made so good because of the narrator, Teri Schnaubelt. She is one of the best narrator's. I love listening to her books. She makes the characters come alive as you are listening.
This audiobook was provided by the author/narrator/publisher free of charge in exchange for an unbiased review.

Pretty good. Wish it was heavier on the scare

Wish it was heavier on the scare and lightened up on the squabbling and drama. The non believer characters were annoying as hell. I wish there was more "sightings" in the book. Just a couple of shadows. I did like the appearance of the aliens haha. That was pretty great. Idk. Im not exactly sure what it needs but i feel it needed something more. But all in all, I enjoyed it. And I was very happy to find an alien abduction novel finally because boy did i search high and low for a spooky alien novel. I think Mark Lukens should do a sequel to this, but I dont feel he will since this novel isnt that popular I believe...

What could Mark Lukens have done to make this a more enjoyable book for you?

Actually add something that hasn't been seen before.

Not be female. It was odd when it was mostly a male character that was the main speaker. Such an odd male voice used too.

Could you see Sightings being made into a movie or a TV series? Who should the stars be?

Some no name C movie up and comer on Netflix

Well no need to write a script for a movie because this book reads like your standard straight to video movie. The main characters are your cookie cutter teens in an alien story - the geek, the jock, the skeptic, and the quite one. Except these characters don't follow a consistent adherence to their characters. One of the characters keep talking about how nervous she is to be back at a tragic site. Except she's willing to have a creepy, talking alien doll hanging outside; she pretty much gets pimped out to the jock, and she doesn't act too apprehensive.

The biggest flaw is that not much happens and the story is too short to add to an atmosphere. Again, it follows the simple movie tropes of alien abduction story's. No much happens then small, unknown things happen, then all heck brakes loose. The climax doesn't make much sense and characters break character even more. It's an ok story for being so derivative but you won't be missing anything that you can't find in the B section of sci-fi on Netflix. Final Grade - C

Mystery at the cabin

This book became quite scary in the last half of the story. I was still awake at 3am listening, I just couldn't put the book down. The author and narrator did a great job.

Loved it even though I did not think I would

If you like Horror or Sci-fi you will enjoy this book. I do not or have not ever read a book about aliens. I am so glad I decided to try this book. The reason I decided to read was because I enjoyed 2 prior books by this author. I listened to this on audio version and enjoyed it very much.