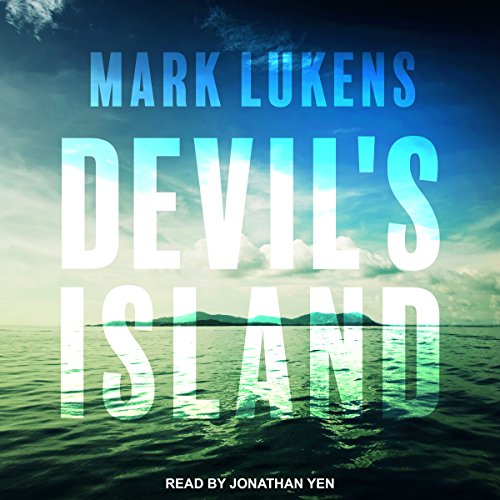 By: Mark Lukens
Narrated by: Jonathan Yen
Try for £0.00

Devil's Island. An abandoned island in the Caribbean Sea with a dark and bloody past. An island with a terrible secret.

Nick Gorman, billionaire movie producer, assembles a team of ghost hunters and scientists to investigate the Thornhill Manor on Devil's Island - the most haunted place in the world that no one's ever heard of. He's there to find proof of ghosts, evidence of an afterlife...but he's also there to uncover the secret that is hidden on the island...to possess it.

The ghost hunting team is led by Shane Edwards who lost his TV show in a scandal and now is a disgrace in the ghost-hunting world; this is his chance to redeem himself and revive his career. But as soon as he steps foot on Devil's Island, he realizes that the fears from the Cranston House, a house he and his friend entered on a dare when they were 12 years old, fears he thought he had overcome, are all coming back. And everyone on the team is facing their darkest fears, the island somehow bringing them to life.

As Nick gets closer to unearthing the secret on the island, Shane begins to wonder if any of them will survive their two night stay on Devil's Island.

What listeners say about Devil's Island

struggled to finish the book but persevered thinking it would get better maybe more paranormal, but no.
Was glad it finished

This book really scared me at times. The plot was fast moving. I had to stop reading it at night it scared me so much.

Enjoyable ghost story with a twist

The premise if this book is a team that has been assembled for a documentary is taken to a abandoned mansion on a deserted island to prove the existence of ghosts and that the place is haunted. The team has a token skeptic, psychic, camera man, and others. Were they really brought to prove the existence of ghosts? Or are they looking for something else for the rich producer who is dying from cancer. Listened to audible version and enjoyed.

A lot of repetition and predictable storyline, ugh. I am trying to listen to the end of the book but really could care less about every single character in it. Don't waste your credit!

I loved it. I loved the characters and their story. I can't wait to listen to more by this author. The narration was excellent also.

Fast paced and well done. I sensed I was in good hands from the first chapter. Great story with some twists and an interesting ending.

I almost never write reviews but felt this book deserved it.

I love the Ancient Enemy series. So I figured I would continue with this book. It had so much potential. Then we get hit with a ton of useless backstory. It seems like the publisher started yelling about finishing it so the ending was just rushed. It could have been a very good book but..

Kinda slow at first but really picks up the pace. then you don't want to put it down

I Hope This Book Is Made into a Movie

I enjoyed listening to this book immensely. The characters were well developed and the story held my interest throughout its entirety. The narrator was excellent. I will be looking for more books by this author, I also hope to find more audible books by the narrator.