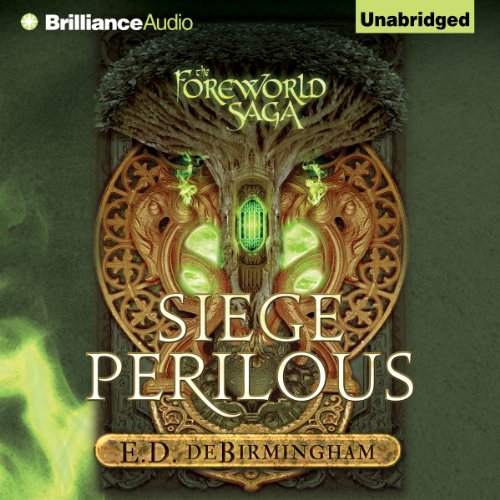 Ocyrhoe, a young, cunning fugitive from Rome, safeguards a chalice of subtle but great power. Finding herself in France, she allies with the persecuted, pacifist Cathar sect in their legendary mountaintop stronghold, Montségur. There she resists agents of the Roman Church and its Inquisition, fights off escalating, bloody besiegement by troops of the King of France, and shields the mysterious cup from the designs of many. Percival, the heroic Shield-Brethren knight from The Mongoliad, consumed by his mystical visions of the Holy Grail, is also drawn to Montségur - where the chalice holds the key to his destiny.

Arrayed against Percival and Ocyrhoe are enemies both old and new who are determined to reveal the secrets of the Shield-Brethren with the hope of destroying the order once and for all.

Alive with memorable characters, intense with action and intrigue, Siege Perilous conjures a medieval world where the forces of faith confront the forces of fear. Choices made by characters in The Mongoliad reach their ultimate conclusion in this fifth and concluding novel - and all of Christendom is at stake.

What would have made Siege Perilous better?

Has Siege Perilous put you off other books in this genre?

If you could play editor, what scene or scenes would you have cut from Siege Perilous?

Anything else read by AD

I really enjoyed the first 3 books in the Foreworld Saga.

shame about the narrator

I have listened to the previous books in this series and they have been excellent. The story in this was good but I felt it didn't grip me in the same way. A lot of that was due to the narration especially the very strange way she pronounced "she/he said" it was quite bizarre. It was almost an invective "she SAIIIIID", it had a peculiar emphasis as if the phrase left a bad taste in her mouth. Once I had noticed it, it seemed to get worse. But don't let that put you off, it may just be my ears !!!

A poor performance to end the glorious Mongoliad

I wished that Luke Daniels, who performs the first four books of the Mongoliad so wonderfully, had recorded this one. Instead Angela Dawe disappoints from start to finish. Only the good story and the conclusion of the tale spun across four volumes made me listen to the end.

Spoilt by the narration

What on earth possessed the author to allow this girl to narrate this book. Just couldn't bear listening to her. Tales like this preferably should have a male narrator. I am sure I elude have enjoyed the tale if this was so. Instead I returned it before finishing part one

Unfortunately I struggled to get through this book, unlike the previous ones which were excellent. I think the story was generally uneventful but the reader was not as good as the previous reader. There were times I felt the book was being read by a bot in some cost cutting fashion. Sorry guys, this is the worst book I have listened to on audible yet and a poor end to the Saga I really enjoyed.

A superb story but a wearing narration

If you could sum up Siege Perilous in three words, what would they be?

What other book might you compare Siege Perilous to, and why?

The previous books in the series

For some reason the narrator decided to Declaim Each Phrase in a manner that grated horribly on my sensibilities. She managed the characters conversation competently and believably, so I have no idea why she decided to be quite so strident with the rest of the text.

Thankfully I realised I could bear it if there was other noise to take the edge off it so made it to the end listening with music in the background, rather then giving up on the audiobook and resorting to reading the book to find out what happened next.

The story was, but the narration nearly stopped me dead within five minutes.

If you can survive the narrator's style, there's a cracking story here.

The continuation of the plot. Books 1 and 2 are the best, the next two are OK. This book is average. The characters are not as interesting. The story line is boring in long stretches. I am not sure a decent narration would have made a difference.

Would you recommend Siege Perilous to your friends? Why or why not?

No. In fact, I'd recommend against buying this audiobook since the narration is, simply stated: poor.

Let's start with what is wrong. As the narration began, I started to wonder, "did Ms. Dawe read this book before she started narrating?" The pauses during the dialogues between characters can be longer than two seconds. Normally they are a second and a half. For example (not dialogue from the actual book).John (as spoken by Ms. Dawe): Hi, my name is John.Listener (counting to himself):: one thousand one, one thousand twoJane: Nice to meet you, my name is Jane.For you nonairborne parachute personnel out there, each thousand count is a second, we learned that so we know when the parachute was supposed to be open (we count three seconds from the instant we exit the aircraft--not open in three seconds, think about deploying the reserve chute right away). Now, I don't know about you, but a narrator should not cause me to practice my count to pass the time while I'm waiting for her narration. When a listener is straining, waiting for the next passage, then the pause is too long. Maddeningly too long.Also, her cadence and inflections when speaking are sometimes very distracting, and that may suit some books, but not this book. Her voice has a harsh edge to it at times, and that is also distracting.Improvement? Find another narrator. I'll never purchase another audiobook that she narrates. Failing that, change the tempo of the narration and moderate your voice. Understand, I have nothing against switching narrators in a series (though I find it irritating sometimes). Each narrator, even one that is new to a series that has four previous books with an excellent narrator, is judged on the merits. I've adapted to this sort of change before. I could not do this with this book. Ms. Dawe's performance is so poor that I was moved to write this review.To those who are Ms. Dawe's fans, I say listen to what others are saying in their reviews. Also, you should know that I have hundreds of audiobooks in my library, I have never criticized a narrator in a review. I have bought audiobooks that had bad reviews from a majority of listeners and found the narration just fine. So when I say in this review that the narration is bad, from my point of view it is really bad.

Do you think Siege Perilous needs a follow-up book? Why or why not?

Not really, but if it is written by the authors of book one, then it would be worth listening to--if the narration is good.

I have a personal rule that I'll never return an audiobook since if I don't like a book, it is probably at least partially a matter of taste on my part. So I won't return this one either. But I am tempted......

The narration is terrible

I finally had to stop this and just read the rest in Kindle. The narration was by far the worst I've ever heard. Just awful.

The first 4 parts of the Mongolliad were very well written and had a good story line and the reader was very good. This last volume was poorly written and even more poorly performed. It was hard to tell which was more poorly done.

Anyway, I recommend stopping with the 4th volume.

Would you try another book from E. D. deBirmingham and/or Angela Dawe?

Not sure why they changed from Luke D. midstream...he had done an excellent job on all the prior books...this narrator is terrible, really annoying...a "reading" not a performance...

I'm hooked on the series, so I had to listen, but OMG what a terrible narrator! I increased the playing speed to make it sound like she was speaking at a normal rate, but of course that made her sound like a GPS voice. Still, it was better than listening at normal speed, and ended the torture sooner. If she is the narrator on the next one, I'm switching to the paper and ink version.

What disappointed you about Siege Perilous?

I haven't gotten far into this. The writing does not seem as compelling as the other books in the series.

I have had trouble getting past the performance. Luke Daniels, who did most of the rest of the series (if not all) made you follow the story. With this performance the narrator had a halting tough to follow pattern that I couldn't get past. I am not sure if I will go back and finish the book. I don't know why the narrator was changed but it ruined things for me.

The original artist continuing to narrate? Haven't finished, can't comment on the story yet.

I have an hour commute each way, and am vested in this series - so I will force myself to finish. But had this been book 1, I'd be looking into the refund policy. If they retain the android reading this book, I will switch to the pen and ink version. Maybe. I read almost exclusively with audiobooks right now. This change is more severe and jarring than when The Dresden Files switched. Painful at best.

What disappointed you about Siege Perilous?

I could not stand the narration. It was so bad I only made it to Chapter 2 before I stopped and deleted the audiobook.

Who would you have cast as narrator instead of Angela Dawe?

Please bring back Luke Daniels and re-record this book! He did an excellent job on the first 4 books in the series.

They switched narrators since the last book. And I apologise for the snark, but had I not heard her affect accents (rather well, I admit) I'd have thought they used a simulacrum. I could not finish this recording.

She does not know how to read a story. You should re record this book. Kindles electronic voice has better diction!!