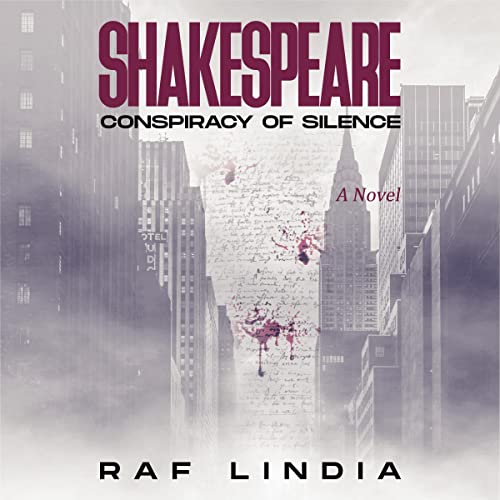 By: Raf Lindia
Narrated by: Tom Fairfoot
Try for £0.00

Five women are found dead in the Sicilian city of Messina.

Former police detective, Francesco Marchese, is called in to help the local police department figure out what ties these women together, and to help stop the ruthless killer before he claims his next victim. What Marchese doesn’t know is that he is being being drawn into an international conspiracy, one that takes him all the way to New York City. He finds himself collaborating with British Intelligence to protect the secret that the British Crown and the Vatican have been covering up for centuries. And, he finds himself racing against the ambitious and conniving journalist, Luigi Capra, to protect the secret and to protect his new love.

Full of suspense and twists, Shakespeare: Conspiracy of Silence is a heart-pounding thriller that brings to light one of the most debated mysteries of the last century - the true origins of the famous English playwright, William Shakespeare.

What listeners say about Shakespeare: Conspiracy of Silence

Amazing crime thriller - full of twists - could not stop listening!

This book is a definite must listen for lovers of Shakespeare and anyone interested in the true origins theory (or Crollalanza theory). But it is first and foremost a book for anyone who loves a good twisting, turning thriller with lots of action and great characters. And the narrator brings an amazing and unique voice to each character and sets the ambience of the book so perfectly.

The author starts the book with a scene from Sicily, 1578. And at later points weaves in other short scenes from history, scenes that help us understand critical elements supporting the theory of Shakespeare’s true origins. But the main story starts in Sicily in the present time (2012), following an investigation into a murder of a young woman, which leads to the discovery of other victims and the possibility that the crimes are all connected.

I love that the action gets going right from the beginning, with a series of murders and the hunt for the killer. There is even a point about half way through the book where you think ok, the mystery is solved, what now? And that’s when the story takes a whole new turn and becomes even more suspenseful! You will also find that in the end, you are satisfied with the ending, but you are also left anticipating another book in the series …

I would recommend this book for anyone who loves a fast-paced thriller with unexpected twists, along with the intrigue of a historical mystery.

Hands down this is one of the best thriller books I have read.
Told through multiple povs and alternating timelines, 'Shakespeare: the conspiracy of silence' by Raf Lindia is a fast-paced, super intense murder mystery. Blurring the lines between facts and fiction, this book keeps you hooked till the very last. The plot is thrilling and keeps you on the edge of your seat throughout. The modern day murders are related to the age old secret of the nations--dating back to 1500s.

Every character is intricately crafted and the back and forth narrative between past and present was done perfectly. I was intrigued by the details this book provides.

Listening to the audiobook of this murder mystery definitely got me all fired up. I highly recommend this book to everyone who is looking for good, mind-bending thriller.

If you are looking for an entertaining and engaging book. Give this a listen.

I decided to listen to this audiobook, by Raf Lindia during a recent long road trip. It made the trip so much more enjoyable. The book pulled me in and had me looking forward to each new chapter.

It was set in multiple eras from present day back to the 16th century, bringing a wonderfully intriguing plot that twists and turns itself into a thrilling story.

The characters were well developed and allows the listener to get into their frame of reference, making them relatable and engaging.

I couldn’t wait to get back into the car after our rest stops so I could keep listening!

Highly recommended for anyone looking for an entertaining and engaging thriller!