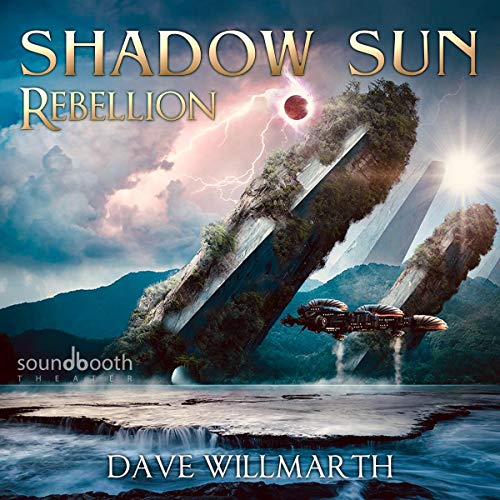 The one year Stabilization period has ended, and the aliens are colonizing Earth! Allistor and his people have prepared as well as possible, and now they'll find out if it was enough.

In this third book of the Shadow Sun series, Earth's survivors continue to fight for their lives, and to reclaim as much of the earth as they can for the human race. More than one alien faction threatens their existence, while others prove to be staunch allies. Allistor and company learn more about the system, its mechanics and politics, and take the first step in bringing the fight to their enemies off-world!

I am a huge fan of post apocalyptic litrps and this one is amazing. Firstly it is not stat heavy so is suitable for all. Secondly the MC has a brain! Many Litrpgs fail because the MC continues to make silly decisions (even though they show high levels of intelligence) fortunately the MC Alistair either uses his brain or refers to someone with the correct knowledge.

Finally this book is a great continuation from the previous two, it shows great character development and a unique world system. It also shows how the humans are integrating in the system. I can't wait to see how this series continues!

I dont know why but all the feelings are a bit too much. If the MC is nice its too much of nice, if he is angry it is too much anger, there is just 0% and 100% and no middle way, which leads to many cringy moments. My last issue is the convenience. The decisions the MC takes which could lead to problems the author does not want are just smoothed out, which is a bit sad cause it does not feel natural. But all in all it is a very entertaining audiobook, with a thankfully clever MC. The setting is great and never fails to excite! So you will get a great experience with minor flaws.

The whole "slice of life" thing is completely overdone ...the character interactions feel really fake, and the narrator's main voice doesn't help make any of it more believable. The narrator does a good job changing voices for the respective characters, but the substance just isn't there.
I think that the "drama" is weak, and in general the writer's priorities are wrong. The whole tone of the story is just off-putting, and ruins what could've been a great series.

In my opinion, it kinda comes across as if the author is having a nerd fantasy where he's "the cool guy" who gets the girl and wins at everything. The ease with which all the monetary gains and power-ups happen makes everything a forgone conclusion.

The magic system and action sequences aren't good enough to tolerate such bad story telling. At the end of the book instead of feeling satisfied I just felt like I wasted a whole bunch of time.

this is one of my favorite series. allistar is back. fighting monsters, claiming land and crafting.
you get a solid story. an awesome production. (in my opinion one of the best out there)
totally worth the credit.

There are a lot of voice actors IN this book that would have been better for voicing Alistair. His accent sounds wrong and whiney. The narrator should have been left there and Jeff Hayes or someone else does the American MC.

Story was solid. There does feel like there is going to be a shift from constant violence to courtly space politics that I'm very interested to see in the upcoming books.

Couple of things here that just weren't up to the usual standard. A couple of the voices are hard to understand not used offten enough to ruin the experience. But they are a little jarring. Second I personally don't enjoy mentions of current events. I thought it was a good jab, but I'm not here for reminders of the real world.

each book just keeps getting better. Dave Wilmarth is a genius writer and I can't wait until book 4!

Great job by SBT crew. Dave Willmarth does another fantastic job. Hope for another audible book!

I really enjoyed this continuation of the series. I hope the next one comes soon.

Love use of that particular poem. Adds a nice touch to fledgling empire. The best way to make people loyal to you and your cause is to give them, identity, pride, and perpose.

He erased the boundaries between borders, and embraced every human as precious.

He instilled pride in that common identity, and condemned those that sought selfish goals. That instilled a "them" and an "us".

He instilled a perpose right from the start, to take the fight to the aliens that destroyed most of there people.

Yet he doesn't condone xenophobia, and trys to taylor the "them" to those that either attack them, or do things no human with a conscience could stomach.

All and all I'm loving this series. He may have lucked out quite a bit, but a lot if it is his attitude towards his people. They all know he beats himself up over every loss. He feels guilty for not knowing the names of and those losses, and he does anything and one suggests that could improve the lives of his people. I doubt many could have done better.

I was introduced to Willmarth via his Shadow Sun series. I checked out his other series the Greystone Chronicles, and found Shadow Sun to be a vast improvement over that work. Greystone is geared towards the young adult crowd, Shadow Sun is more mature and complex.
This series gives me everything I need, 3 dimensional characters, believable plots and motivations, and exciting fight scenes with a point.
Give it a try, it has my seal of approval. No harems, sexism, rape or slavery fetishes or racism.