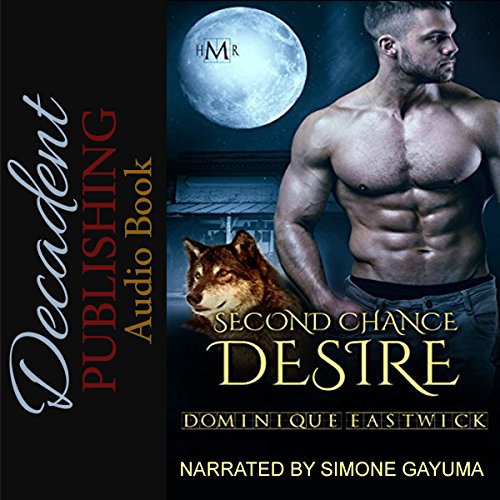 By: Dominique Eastwick
Narrated by: Simone Gayuma
Try for £0.00

Knox Fort only wants to be left alone. Eight years ago, his world crashed when his mate walked out on him. After a stint in jail for a bar fight, he did the only thing he could. He emotionally closed off to everyone and everything. Now he is content to act as a sentinel for his pack and work at his auto garage.

When Emerson Kingston returns home to deal with her mother's estate, car trouble and ex-lovers aren't in the plans. But opening old wounds is sometimes the only way to move on, if moving on is possible with a man who has closed himself off to the world.

Fate is a wicked bitch who doesn't always care what you want. Can Knox and Emerson figure get their second chance, or will it kill them in the end?

Second Chance Desire by Dominique Eastwick is a really good second chance love story. i enjoyed the atory the characters and the narration

A cute little story for sure. I prefer these shorter stories that aren’t full of a whole bunch of useless fillers sometimes. This is the first book in the series that I have read but I didn’t feel I missed anything so it definitely can stand alone. Overall story was interesting. Included a sweet romance and hot shifters. Let’s be honest, the female MC got more than a second chance, but it didn’t take her long to come to her senses. I was given a free copy of this audiobook at my request, and I’m voluntarily leaving this honest review.

Second Chance Desire books is about finding love the second time around. The storyline is strong and believable. The characters are strong, quirky and likeable. The story also offers hot steamy sex. I received this audio book at my request. I am leaving this review of my own volition.

Amazing second chance shifter romance! Loved the characters and story, plenty of action and humor. Fantastic narrator too! I received a free review copy of this audiobook at my request and I have voluntarily left this review.

This was a simple, easy listen. It seemed rushed and the book could have had more detail and added more to the scenes. But for a small book it was interesting and sexy.

The narration was good. She made it easy to listen to.

This is book 8 in a series but it's the first one I have read or listened to and I have to say that this in no way spoilt me enjoyment of the story. This is a book which took me on a rollercoaster of a journey it has love and betrayal at its core because eight years before the book starts Knox professed his love for Emerson and the next day she left him with no note nothing. For a wolf who thought he had found his mate this was the most devastating thing that could happen. Because of this Knox is now not the man-wolf he was, where he was outgoing, friendly and social now he's a loner, he eats, sleeps and works and apart from running to let off steam he is totally bottled up tight. He is loyal to his pack but has nothing else.

Emerson met Knox whilst she was waiting to be deployed by the army she has now finished her deployments in Afghanistan and is home in the US, Emerson could not be more different from Knox, for a start she's human. Does not know about shifters and has no one and nothing to hold her anywhere. She is in the process of returning to her childhood home to close up or dispose of the house her mother brought her up in. Her mother was not a good mother she is the reason Emerson has such bad trust issues and does not believe in love.

Little do either of them know that in this place so removed from where they met they will meet again. Will Emerson be able to get over her fear of love, of relying on someone else after the terrible experiences of her childhood. Will Knox be able to open himself up to Emerson again after the dreadful way she left him before?

Nothing is ever easy and to add to their problems their home town is the victim of neo nazis set on destroying property and raping Emerson. Will Knox be able to win her back without frightening her too much, will she be able to accept what he is? This story evokes many feelings and for me it was well worth listening to.

I never give spoilers so I will not say anything more, except I now want to listen to more from this series. The writing style of Dominique Eastwick and the narration of Symone Gayuma were excellent.

I received this book as a gift and am voluntarily writing my review.

“I was voluntarily provided this free review copy audiobook by the author, narrator, or publisher.”
Lets start by saying, this is the first Dominique Eastwick book I have listened to & I quite enjoyed it. I may have to go back & look for the first 7. :)
Knox & Emmy meet in Miami when Knox goes for mechanical training right before she leaves for boot camp. Knox knows that she is his mate & before she leaves he tells her he loves her &...of course she runs! (which leaves Knox without a mate) 8 years later, her mother dies & Emmy is coming home to deal with her mother's estate. On the way there, runs over...of all things an alligator! She stops at a garage to have the car fixed which just happens to be owned by Knox. Although I thought the author could've made Emmy seem a little stronger than she did (she is in the military after all), I think that Knox & Emmy are great together.
Great read.

I enjoyed listening to this book and listening to the narrator. Will listen to more by this author. "I was given this free review copy audiobook at my request and have voluntarily left this review."