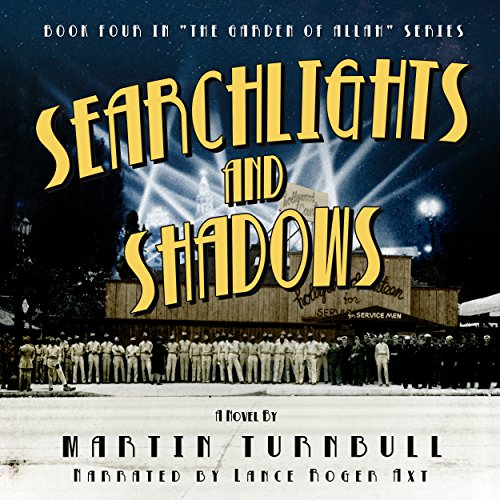 By: Martin Turnbull
Narrated by: Lance Roger Axt
Try for £0.00

At the dawn of 1942, the dark days of Pearl Harbor still loom over Los Angeles. America is now at war, and posters warn home front Hollywoodites that loose lips sink ships. Wartime propaganda is the name of the game, and studios are expected to conjure stories that galvanize the public in favor of the war effort. Marcus Adler is an MGM screenwriter whose latest movie was stolen out from under his whiskey glass, and he's determined it won't happen again. He comes up with a surefire hit, but his chance to triumph is threatened by a vicious rumor: "Marcus Adler is a goddamned commie." Gwendolyn Brick is the handiest gal with a needle this side of Edith Head. After losing her job at the Cocoanut Grove, she dreams of opening her own dress store. But banks don't make loans to single girls. However, wartime in LA opens up an opportunity that will rake in the bucks. But will it be worth the trouble if it drags her back into the orbit of Bugsy Siegel? At the outbreak of war, the Hollywood Reporter's circulation starts to shrink like a food rations coupon book. Its lead columnist, Kathryn Massey, realizes she can no longer ignore the obvious: her boss, Billy Wilkerson, is gambling away his fortune - and her future. Could their very survival depend on a place nobody's heard of called Las Vegas? In the city of searchlights, suspicions can lurk behind every shadow. Searchlights and Shadows is the fourth in Martin Turnbull's series of historical novels set during Hollywood's golden age.
©2015 Martin Turnbull (P)2015 Martin Turnbull
Biographical Fiction
Show More Show Less

What listeners say about Searchlights and Shadows

Step into the world of Hollywood post Pearl Harbor

I've come late to this series, but that doesn't seem to matter. See the publisher's summary for an adequate recap of the story without spoilers. The author manages to weave historical personages and documented behaviors with fictional characters in a way that is seamless, pleasing, and revealing of deep historical research. If you enjoy this era and place, you cannot miss with this book. I know that I want to read the other books in this series, not because of any lack in this one, but because I know that I will enjoy them.
Mr Axt brings his talents to this performance in ways that enhance the depth and personalities of each character, making the entire experience more riveting.
"This audiobook was provided by the author, narrator, or publisher at no cost in exchange for an unbiased review courtesy of AudiobookBlast dot com."

Where does Searchlights and Shadows rank among all the audiobooks you’ve listened to so far?

It's a fun book, but not in the top ten.

GWENDOLYN, SHE'S A GO-GETTER, WON'T GIVE UP ON HER DREAMS.

ANOTHER EXCELLENT READ IN THIS SERIES. I'M REALLY GOING TO HATE TO SEE IT END!!! 👗💸💄😉

Yes I would. It is a nice newsy historical fiction novel about wartime Hollywood during the second world war.

How closely bonded and loyal the group of friends were. They were like a tight knit slightly dysfunctional family.

If you could take any character from Searchlights and Shadows out to dinner, who would it be and why?

There were so many interesting characters it is hard to choose. I think I'd choose Bette Davis. She was a strong talented predominant woman in a man's world.

This was the last installment of a series and the first of the series I listened. to. I went back and purchased the rest of the series as I literally felt like I was late to the party while listening to this book.

The characters are well developed and original. The tenants of the Garden of Allah are sort of like the group of friends in the TV show 'Friends' and are like a family. In today's world I can't picture a group of neighbors being like a close knit family. Relationships today are more distant and superficial. I was like in tough times people bond more closely together.

I really like this series but this books narrator is so bad. If you have a series you should stick with same narrator but i understand things happen so you may have to switch it up. . I couldnt tell the difference between alot of the characters. The first 3 books each character had a different voice, it was so good. For example The first 3 books the character Monty sounded like a southern gentleman this book he sounds like a dumb redneck. I was really looking forward to the rest of this series until i saw this narrator is in on most of the remaining books.

"This audiobook was provided by the narrator at no cost in exchange for an unbiased review courtesy of AudiobookBlast dot com."

Isn’t it interesting how, despite (despite?) the Hays Code, racism, McCarthyism, homophobia and faux marriages, and a studio system which can harrow up thy soul, freeze thy young blood, Make thy two eyes like stars start from their spheres… still, Classic Hollywood was far and away, miles and miles, and many times better than contemporary Hollywood. I love the actors of this era and the films they starred in, so – especially taking in the WWII Homefront aspect – this book had a lot going for it.

I learned a great deal - Ogden Nash worked on The Wizard of Oz? Bette Davis declared complete integration for the Hollywood Canteen (actually, I learned everything I know about the Hollywood Canteen from this book, and loved it). Orson Welles in this period was dating a semi-literate stripper. I learned that Errol Flynn was tried for statutory rape (I’m still surprised I’d never heard of that), and everything about Alla Nazimova.

On the other hand, Bette Davis also had conversations with the fictional main characters, Errol Flynn had an affair with one of the fictional main characters, and Alla Nazimova was like a mother to the fictional main characters. Aaannd yes, here’s the complaint I often come out with about books like this: Well, here. Here’s the thing. My family has a tradition of mock-claiming celebrities with our name – Cousin Rod, Aunt Martha, Uncle Jimmy, etc. James Stewart barely rated a mention in this (wrong studio)(no – he was MGM. How odd), but if my name was, say, Novarro, or Welles, or Mayer, or Flynn… I would be a good deal less tolerant of this book. I have to admit the backstage-Hollywood perspective was fun… I also have to admit I was a little squeamish about it. I might have preferred that all the characters were like the inserted fictional actors that starred in the fictional "William Tell”… I know, I’ll stop now.

The writing was alternately fun and exasperating. I loved the line “That bitch will take a powder so goddam fast you’ll be tasting Max Factor clear through to next week.” It still makes me smile as I write this. There was a metaphor involving a bank robber that was kind of awesome. There was very heavy use of simile and metaphor – and not all of it was this successful. There were a number of misplaced modifiers and suchlike, and sentences like “I suppose she won’t be the first staff member we’ll lose” which … I don’t think that means what you meant it to mean.

My response to: “It’s taking all of my will power not to lean over and kiss the cotton-pickin’ dickens out of you” – was “take me, I’m yours”. / sarcasm.

The celebrity characters, as I mentioned, made me a bit uneasy. I was never sure where the line was between “this happened” and “made up by the author” (and then of course when you factor in “this was a fiction created by the studio” it just gets a little hairy). The main characters were strong; I understand how those who started with the first book could feel that these folks were good friends. I’m not sure I adored them enough to go back and start from the beginning, though. For one thing – not a definitive thing, not a deal-breaking thing, just a thing I didn’t like – I kept raising my eyebrows as aspiring designer Gwendoline wandered the world taking notes, not admiring the clothing she comes across and planning to use it as inspiration so much as … planning on ripping it off. Moral ambiguities I can work with; I didn’t much care who the characters slept with, or who had what black market dealings. But this was disturbing.

The narration was equally alternately fun and exasperating. Characters were given distinctive voices that kept them identifiable – and, I’m happy to say, the stars were not read with an eye (ear) toward impersonation. For those with distinctive mannerisms, Mr. Axt hinted rather than going full-on Rich Little, and it worked beautifully. However, there were some pronunciation issues that did not work. “Brassiere” was pronounced “brasserie”; director George Cukor’s name is consistently mispronounced “cookur” ... it’s “Bowdlerizers” and not “Bowlderizers”; and, dammit, the word is NOT pronounced mischiev*i*ous. (I sincerely hope the word “epitome” was intentionally mispronounced, down to the ignorance of the character using the word and not the narrator.)

So: fun, but I don't expect to continue with the series.

One last eyebrow-raiser, proving perhaps that either monks led a very different lifestyle in 40’s Hollywood, or the author’s control of language might not be exactly what he thought it was: “For the longest time, Marcus doubted he was any good at this “boyfriend” business, and had almost resigned himself to a monk-like life with the occasional encounter.”