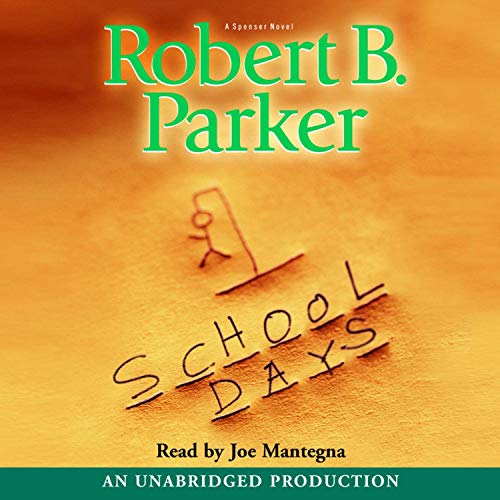 By: Robert B. Parker
Narrated by: Joe Mantegna

Lily Ellsworth, erect, firm, white-haired, and stylish, is the grand dame of Dowling, Massachusetts, and possesses an iron will and a bottomless purse. When she hires Spenser to investigate her grandson Jared Clark's alleged involvement in a school shooting, Spenser is led into an inquiry that grows more harrowing at every turn. Though seven people were killed in cold blood, and despite Jared's being named as a co-conspirator by the other shooter, Mrs. Ellsworth is convinced of her grandson's innocence. Jared's parents are resigned to his fate, and the boy himself doesn't seem to care whether he goes to prison for a crime he might not have committed.
©2005 Robert B. Parker (P)2005 Random House, Inc. Random House Audio, a division of Random House, Inc.

"As always, Spenser solves the case in a surprising manner, shoots some bad guys, and has several attractive women offer him sex, all of which he handles in his proficient, wisenheimer way." ( Publishers Weekly)

Spenser at his Best

I've read or listened to every Spenser novel since the beginning. You have to know a little about the history to appreciate the ongoing relationship between Spenser and the other characters. This one is no different.
I enjoyed the dialouge between characters and I thought the plot was inventive. The resolution of the plot was well done and believable. Along the way the notions of loyalty, love, and adolescent angst are nicely managed. A very good listen. Mantegna is at his best in these novels.

This is a typical Spencer adventure with fewer--thank goodness-- "I said"/"she said"s. Parker has offered a storyline that amalgamates 3 top news stories of the last several years, and it is evident what the author's opinions are regarding these themes, but this does not detract from an offering that rolls along nicely.
The fact that Susan and Hawk are not in the thick of things also does not detract,and although not spectacular, this narrative is much more fluent than some of his recent books. Enjoyable.

Beginning With A School Shooting

The grandmother of a boy charged in a school shooting has hired Spenser to prove his innocence. The first problem is the amount of evidence that the kid appears to be guilty. The second is that the kid will not speak; to Spenser or anyone else. As Spenser hangs around town he wins the enmity of the police chief who botched the whole reaction to the shooting; ala the Jefferson County Colorado Sheriff's Department at Columbine. Add in a wannabe gangster from inner city Boston; a counselor with some huge issues; an unethical school principal and the boy's parents and you begin to wonder what took the shooters so long to break. As always Spenser keeps digging into events and speaking with everyone even peripherally involved. What he finds, is that what precipitated the shooting; other than disaffected suburban white boys; was another recent school phenomenon that at first illuminates then leads to even more of a monumental lack of ethics within the school's administration. Not a great listen but a pretty good one; worth the credit.

It may take some time to get into the Spencer books, because of all the "he said, she said" wording, but they are so good. I love the characters and the humor they all bring to the story. So it's a good/funny detective story. I especially love Joe Mantegna as narrator, not so much the other narrators for these books. If you like detective books and a good laugh out loud comedy you'll love this book and others in the series.

Parker's prose is reflective of Daschiell Hammet, especially the Thin Man. Joe Montegna is a natural for reprising the Spenser character. Even in School Days, one can envision Montegna as the title character better than the TV series actor Robert Urich. I imagine a better cast to include Montegna, Ving Rhaimes as Hawk, Lindsey Krause as Susan and Lisa Edelstein as Rita. School days spent too much elaboration on a thin premise. One would expect more of an outcome given the initial build up. Still, the reader is baited into pursuing the finish in Parker style.

I'm a big fan of the Spenser books and I loved this one. The reader was perfect for the story.

Spenser's back, and am I glad to see him! As always, the plot is well-crafted and absorbing, the dialogue sparkles, there are the usual two or three laugh-out-loud wisecracks, and Spenser proves that Right will prevail (especially if Right has a 20-inch neck and a terrific left hook). And thanks and kudos to Parker for his trademark minimalist style, which gives the reader credit for having enough imagination to fill in the unimportant details. The only thing better than a new Spenser novel would be two new Spenser novels, but I suppose it doesn't do to be greedy.

Spenser at his best -- almost

Very good plot but ending not so good. I missed Susan in this story about two boys involved in a school shooting one needing a psychologist 's perception. And there was a twist in the plot that Susan's insight would have been grand. As a teacher, I enjoyed the school setting as well as the cleverl involvement of different types of students. It was appropriate since we have experienced similar school shootings in our time, but upsetting because young men were the shooters and many people died. I wish the ending didn't leave me wondering the outcome. Spenser was his usual debonair, clever self. Pearl was a sweet gem!

love Joe Manyegna as the reader!

Great story, read by a great reader. I enjoy all of Spencer's exploits, and this was most enjoyable

Joe Mantegna does his usual great job. It's a well written story. It's worth your time.