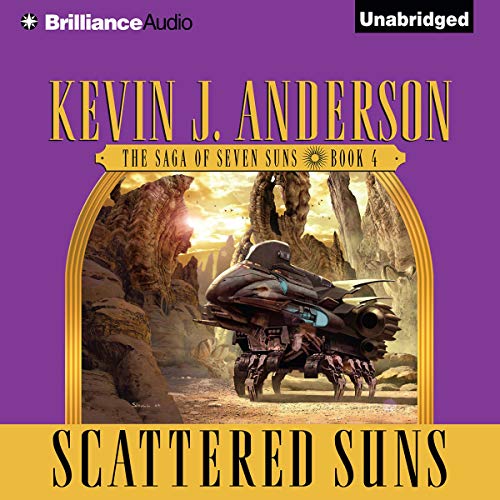 By: Kevin J. Anderson
Narrated by: David Colacci
Try for £0.00

The war between the alien hydrogues and the faeros rages, reducing suns to blackened shells - including one of the fabled seven suns of the Ildiran Empire. Instead of protecting themselves, the Ildirans engage in bloody civil war and the many factions of humanity are bitterly divided. Can mankind and Ildirans overcome their own internal fighting to face a deadly new enemy that is ready to annihilate them?

Newly ascended to the Ildiran throne, Mage-Imperator Jora'h must quash the rebellion launched by his mad brother before the hydrogues destroy what is left of the empire. Assailed from all sides, Jora'h turns to his beloved half-human daughter, dispatching her on a desperate mission to make peace with the hydrogues.

Hope for humanity now rests with Jess Tamblyn, who continues to seed worlds with the watery wentals, the mortal enemies of the hydrogues. And on the ravaged planet of Theroc, home to a telepathic worldforest, a dead man is resurrected to prepare for the arrival of mysterious new allies in the fight.

But Chairman Basil Wenceslas's vendetta against the free-spirited Roamers has blinded him to danger closer to home - the soldier machines that make up the backbone of the Hansa fighting force. King Peter has long suspected that the compies, built with the help of the ancient Klikiss robots, cannot be trusted. Now the shocking proof comes when the Klikiss launch their long-planned extermination of all things flesh and blood. And in the ensuing battle, humans and Ildirans alike will face their darkest choices yet.

What listeners say about Scattered Suns

Change of narrator slaughtered it.

As per the headline. Narrator changed after I'd gotten used to the previous one. He's absolutely rubbish at accents. Never mind pronunciations of various names and places. Crap

The story is excellent. I have already read the whole series as well as the following, saga of shadows in paperback. It is still well worth revisiting the story in audio book as I loved the story so much.
A massive galactic plot with characters that you come to like, love and hate.
Addressing some of the criticism in other reviews of the narration. The first couple of hours are beyond frustrating with the different pronunciation of character names from the first three books.
I think you have to cut the narrator a little slack on this. He has taken over mid series from another narrator who did a fine job on the narration of the first three books. Taking the pronunciation of the first three books out of the equation. this narrator makes an excellent job, putting in a great deal of effort with voices and radio communications. None of the robotic passionless reading from a lot of narrators. Had this narrator been onboard from the start I would go as far as saying the series would have been better for it.
This said you will find the pronunciation for the first couple of hours annoying if you have listened to the first three books but get past that and accept it, and you will enjoy a really good narrator. The only reason I four stared and not five, the performance was the mentioned issues. But I half feel I'm being harsh.
I'm certainly going on again all the way to book 7.

GREAT Series....Narrator change from Book 4 on

I wrote Kevin J. Anderson at his blog about the change of narrator in mid series(book 4 and on). I made similar comments to the ones I found here about bad pronunciation of names and do the narrator's ever read the book. To my surprise, he responded the next day, and very much appreciate him taking the time to respond:

The audio publisher changed after book 3 (from Recorded Books to Brilliance); in most cases, Scott Brick or Jim Meskimen have read my books, and I have very close contact with them. For the first three Seven Suns books, I had a long phone conversation with George Guidall to guide him through the pronunciations. For the other Seven Suns books, I sent a pronunciation list, but I did not have any contact with the reader.

I bought the first three books in the series. The narrator set the tone for the books and did a wonderful job. They changed narrators for the rest of the series. He pronounces character names wrong. There is cheesy conversation over radios. The "rube" roamers have a southern accent. The "intelligent" Ildirens have a UK accent. Very bad Narrator. I wish I could get a refund. The publisher should be ashamed. Doesn't the new narrator have to listen to the previous narrator? There has to be continuity. Don't buy this series. I bought the first 4 I guess I have to buy the last 2 but I spend all the time talking to my ipod correcting the pronunciation of the names.

Buyer Beware!!! This is NOT a Recorded Books publication and it is NOT narrated by George Guidall. Colacci's mispronunciation of names and the horrible characterizations with lame accents are like a punch to the face after enjoying Guidall's impeccable performances on the first three books. Read the rest of this series with your eyeballs, folks. Or lacking those...Braille!

disappointed with the narrator

I loved the first three books, and found the narrator engaging. This one is read by someone else, and I do not enjoy his style. Also, as mentioned by another reviewer, he pronounces many of the names differently. I actually didn't listen to the whole thing, I went and bought the book itself.

I initially felt like the last reviewer, thinking that this narrator would've probably been acceptable (even given the ridiculous accents) if I hadn't already listened to 60 hours of the previous, excellent narrator, and that I would hopefully get used to him eventually. The different name pronunciations were distracting, but not deal-breakers. UNTIL NOW! I just reached the part of the book where Tasia's compie "EA" comes into the story again. Amazingly, the narrator even manages to mispronounce this two letter name, saying "ee-aah", despite the fact that it states clearly in an earlier book that compies are referred to by the first two letters of their designation, and there are copious examples already mentioned ("U-R", "D-D", etc... I'm now worried to hear how these other compie names will be butchered by the narrator when they come up in the story again: "er" and "duh-duh" perhaps?) Although I'm only partway through Scattered Suns, everytime I hear "ee-aah" now, it is like nails on a chalkboard.

In the event that a change in narrator must take place in a series, it would take so little work by the production company to just have a flunkie listen to the first three volumes and make a list of pronunciations for the new narrator to increase consistency and to prevent embarrassing errors like this "ee-ahh" fiasco. They will end up with much happier consumers, and probably with a happier author as well.

I thoroughly enjoyed the first 3 books. This new narrator painfully mispronounces almost every name and sounds like he is horking up a hairball when he pronounces the Mage Imperator's family names...Very disappointed.

I was hoping that everyone was wrong about the narration issue, I see (or should I say hear) they were quite right. I can't stand this narration. What a waist of a good series.

The series is good, not great. it's just too predictable to be great, but the imaginative epic captures you and makes you want more. However, I'm about half way through this fourth book of the series and I don't know if I can continue. David Colacci (the narrator) is Horrible - one of the worst I've heard, and I can't believe they let such a poor narrator take over for a series as popular as this.

Add my husband and I to the list of people who found the narration of this book both horrendous and frustrating to listen to. Not only did he change the way several of the character names are pronounced compared to the previous narrator but he also gave them bad, and in our opinion, "just plain wrong" accents. He managed to ruin the book. The story itself is good, if you can get past the horrible narration.

I agree with David. After about 60 hours of listening to one narrator and to then have a new speaker come in with a whole new set of pronunciations is very bothersome. The new guy really should have listened to the first 3 Audible productions. I'll keep listening for a while to get past it and be back with a full review.