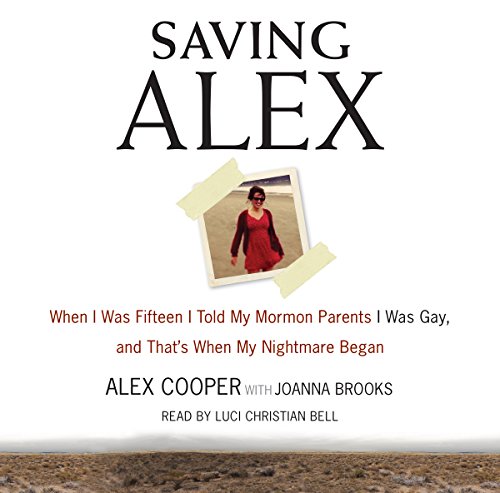 Days after Alex Cooper told her parents she was gay, they drove Alex from their home in Southern California to Utah, where they signed over guardianship to fellow Mormons who promised to save Alex from her homosexuality.

For eight harrowing months, Alex was held captive in an unlicensed "residential treatment program" modeled on the many "therapeutic" boot camps scattered across Utah. Alex was physically and verbally abused and forced to stand facing a wall for up to 18 hours a day wearing a heavy backpack full of rocks. "God's plan does not apply to gay people," her captors told her, using faith to punish and terrorize her. With the help of a dedicated legal team in Salt Lake City, Alex would eventually escape and make legal history in Utah by winning the right to live under the law's protection as an openly gay teenager.

Saving Alex is a horrific yet uplifting story of identity, faith, courage, acceptance, and freedom that reveals what happens when religion goes too far and how a group of dedicated Americans and one young woman fought for her rights, including finding the strength and courage to be herself, and how her story has inspired countless others along the way.

What listeners say about Saving Alex

I'm a Christian straight, divorced man, with 2 kids that lives in the heart of the Bible Belt.... Alabama

I enjoy reading/ listening books about things I know nothing about. As stated above, I'm a Christian who has battled drug and alcohol abuse. Having been clean for 4 years now, I am still labeled. So this book intrigued me because I wanted to see what being labeled from another point of view was like, the things others went through. It is a great book! I had no clue the struggles the gay community goes through. This book made me a better person!

Important story for our LDS community

As members of the LDS church, when we hear horror stories like this we must shout from the rooftops. Until members pressure the leaders to develop a modern understanding of psychological development in teenagers, especially LGBT youth, these tragedies will continue. The church needs to transition from feelings based morals to data driven ethics. When LGBT teens are often abused this way and the data mounts against doctrine, it's time to alter our conclusions about God's rules concerning homosexuality. LDS leaders have been wrong and have altered the doctrine so often, we should expect changes when the evidence becomes overwhelming. Embrace being part of making positive change; speak up to LDS leadership to change the hurtful doctrine and help heal the damage that's already been done.

Hard to believe this horrible treatment is still happening to this community! Good for her in having the courage to take a stand for herself at such a young age.

i listened to this in one day. The story is well written. The narrator does an amazing job of expressing the emotions. I cried. Then I went upstate at 1:00 AM to tell my kids that I love them - especially my 15 year old daughter who has an amazing girlfriend and was never afraid to tell us that she likes girls.

A message for hope and a call to action

Alex's story is an inspiration, even to a straight white cis male like myself.

Saving Alex, as a book, is a roller coaster of emotions. Desires for justice, joy at the conclusion to her ordeal, immense feelings of sadness and even tears will wash over you as you read or listen to it. This book needs to be heard by all.

It was an amazing story read with emotion! I felt extremely emotional as if I were the one experiencing the pain Alex went through. I did not tell anyone my sexual orientation until I was in my 20s and as a Christian, I went through people who turned their back to me. I’m so glad I bought this audio book

This story about Alex Cooper’s bravery at the tender age of 15 years old breaks my heart and heals it simultaneously.

This book is incredible for anyone looking to educate themselves on the reality that LGBT kids STILL face today, even in 2020 (there are STILL many “treatment” centers in the country).

The narrator is great, and somehow manages to individualize character voices without it sounding goofy. 5 stars all around!

This book was absolutely inspirational it's an amazing story and it needs to be told so everyone should read it. It feels so intimate and so many pages are right out of her journal. It's an important book. The more people that read this the more people will know the story and be able to help other people in situations like Alex's

A must read for everyone!

This book was beautifully written! The narration was easy on the ears! I enjoyed her voice and her ability to capture my attention!

My heart aches for anyone who goes through what Alex did! Her courage shines through in this book and I found myself pulling for her as the book went on!

I believe this book is beneficial to anyone from all walks of life. People from any faith or sexual orientation should read and learn from this book.

I will listen to this book more than once and will encourage my children when they are old enough to listen as well!

Oh my gosh this book blew my mind. I was so angry with what was happening to Alex that I couldn’t stop listening. I NEEDED to know what happened. I’m very disappointed in the ending though... it’s a true story so I can’t say much but darn it!!