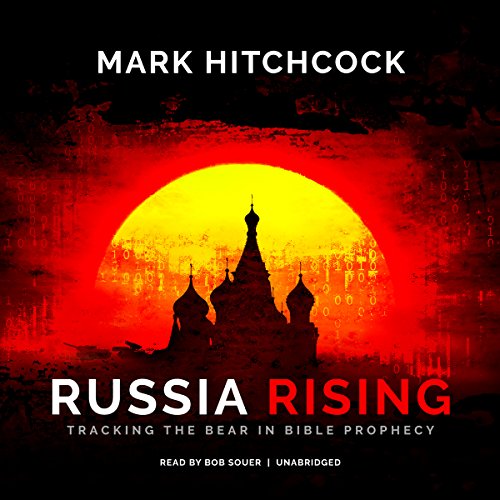 By: Mark Hitchcock
Narrated by: Bob Souer
Try for £0.00

Russia, again, is on the move. The news headlines proclaim it. Georgia was first, then Ukraine and the invasion of Crimea. Meddling in the elections of the United States followed. For the fourth straight year, Forbes has ranked Vladimir Putin as the world's most powerful person - even above the president of the United States. Like it or not, the world has descended into a new Putin-led Cold War 2.0. As the storm clouds gather, America sleeps.

Russian's hand in Syria and its closer ties to Iran are especially alarming to those who know Bible prophecy and the book of Ezekiel. Putin is poised right now on Israel's northern border - an ominous sign of our times. What does the Bible say about our troubling times?

In Russia Rising, Mark Hitchcock, popular speaker and Bible prophecy expert, explores the history of Russia and its current military moves. He will explain the biblical prophecies related to Russia, the Middle East, and the end-time. The tracks of the Russian bear lead to the Middle East and Israel. Are we on a collision course with Russia?

What listeners say about Russia Rising

Mark Hichcock's book is so current it is scary. Thankfully I am Saved. I hope this message gets out to Christians and non-believers.

Fascinating. Mark Hitchcock does an outstanding job making this prophecy very understandable. The Q&A at the very end is great too. Highly recommended.

Interesting in the first 8 min

Within the first 10 minutes this author is narrative is about everything that the democrats have been trying to pass everything on Russia and Trump are very demonizing. This is a great book for the far left but this is not fact checked. I was liking the narrator but then all the silly stuff from the Trump administration just leaked in...faster and faster. It's really too bad.

Started off with Russia hacking democratic candidates email (never substantiated). Then gives credit to John McCain for anything truthful after he went to Russia and purchased the fake dossier on Trump. After the amount of false information in the first few minutes, I cut it off. I’m glad that I didn’t buy this

We are at the threshold of going home

I bought this book today and could not put it down. Better than watching the MSM.

What a complete waste time and credits. I wish I had more hands so I could give this book four thumbs down. I recommend this book to nobody.

We all know that Russia did NOT interfere in the 2016 election! That was projection from the far left…it’s been proven and Durham is now prosecuting those people…China is the one that interfered in the 2020 election…to bring in the GREAT RESET….In other words, The New World Order! Trump set them back 4 years, now they have to double down on their plans…This author is clearly not correct in his assertions…He’s obviously a MAINSTREAM MEDIA believer, that alone takes away his credibility! Too bad, I was a huge fan of Mark’s teachings….Now, not so much!

Wow, what a great book.

Explains middle east current affairs with biblical prophecy. All factual, a must read. Much more than just Russia.

The bible comparisons as it relates to Russia were very good. However there exist some incorrect statements of "fact" that parrot MSM's lies that are pushed due to central banking tycoons and deep state CIA's (who control nearly all media's talking points) disapproval of Trump who was elected on a platform of breaking up corruption at the highest levels of government, and those privileged few who make most of the big decisions of the world, and control our economies. For example, there is massive evidence that the DNC emails were hacked locally (as in on a flash drive) which has been hinted at by Julian Asange who points to Seth Rich, a Clinton campaign worker who was later supposedly killed in a mugging gone bad, but was more likely assassinated along with many others by the Clinton crime syndicate. Also as the failed and ridiculous Robert Mueller investigation has shown in it's failure to come up with any prosecutable evidence, Trump did NOT collude with Russia, and it is ridiculous to think that anyone changed their vote based on adds bought by "Russian agents." These Russiphobic accusations make me wonder what other falsehoods are to be found within this book.