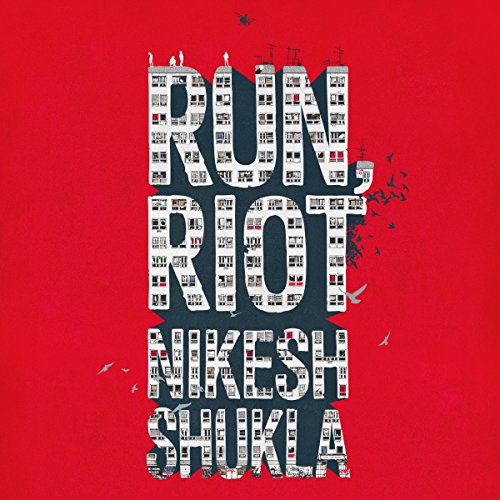 By: Nikesh Shukla
Narrated by: Lolly Adefope
Try for £0.00

From the editor of The Good Immigrant, an adrenaline-fuelled, powerful YA novel about young people taking charge of their own destiny. A novel about standing up and being counted.

Aspiring MC Taran and her twin brother, Hari, never wanted to move to Firestone House. But when the rent was doubled overnight and Dad's chemo meant he couldn't work, they had to make this tower block their home. It's good now, though; they feel part of something here.

When they start noticing boarded-up flats and glossy fliers for expensive apartments, they don't think much of it - until Hari is caught up in a tragedy, and they are forced to go on the run.

It's up to these teenagers to uncover the sinister truth behind what's going on in the block before it blows their world apart.

What listeners say about Run, Riot

Meatspace was brilliant, an on-the-money look at a social-media-obsessed world. Shukla here turns to the YA audience and a selection of other hot topics: gangs, violence, corruption.

Twins Taran and Hari live in a rundown estate, after their Dad's chemo and unfairly rising rents out-price them from a nicer area. They've settled there, made friends. In a THUG-like (Angie Thomas) scenario though, things come crashing down very quickly.

The tragic setup that they film sets up a community-spanning set of events that endangers their group of friends as they try to work out why things are happening and if they can work things out for themselves.

While I liked the overall scenario and aim of the book, I didn't really get a feel for the protagonists, and the key scene that sets off the plot didn't make sense to me - it seemed unrealistic that it would take place as it did (I don't want to specify to avoid spoilers). Characters also seem to recover from the shock/grief of it quite quickly as well, and the character involved, I felt, never got a chance to explain why he let it happen.

It may have detracted from the novel, listening to this on audiobook. I might have felt more flow reading this on paper/e-reader, rather than disjointedly over several days in the car via Audible. I also didn't feel the narrator conveyed the voices I expected in my mind for these young people in this particular setting.

The hidden story (again, no spoilers) was one I wasn't sure teenage readers would care too much about, they are more likely to be interested in the relationship between youth and the police, gangs and related crimes, family and loyalty. I lost interest in listening a few times and had to backtrack.

I'd say this will have an audience. I just don't think I'm 'it'.