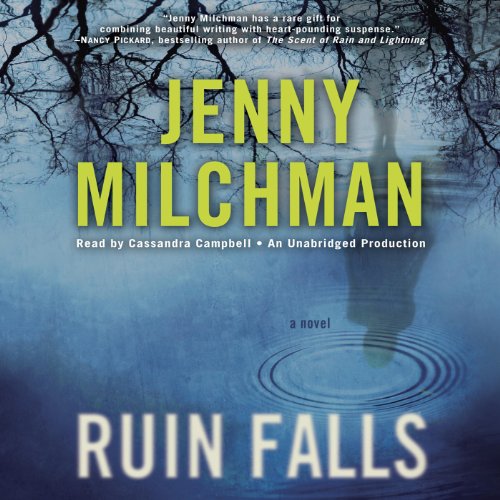 In a suspenseful follow-up to her critically acclaimed Cover of Snow, Jenny Milchman ratchets up the tension with this edge-of-your-seat story of a mother determined to find her missing children.

Liz Daniels has every reason to be happy about setting off on a rare family vacation, leaving behind her remote home in the Adirondack Mountains for a while. Instead, she feels uneasy. Her children, eight-year-old Reid and six-year-old Ally, have met their paternal grandparents only a handful of times. But Liz’s husband, Paul, has decided that, despite a strained relationship with his mother and father, they should visit the farm in western New York where he spent his childhood.

On their way to the farm, the family stops at a hotel for the night. In the morning, when Liz goes to check on her sleeping children, all her anxiety comes roaring back: Ally and Reed are nowhere to be found. Blind panic slides into ice-cold terror as the hours tick by without anyone finding a trace of the kids. Soon, Paul and Liz are being interviewed by police, an Amber Alert is issued, and detectives are called in.

Frantic worry and helplessness threaten to overtake Liz’s mind - but in a sudden, gut-wrenching instant she realizes that it was no stranger who slipped into the hotel room that night. Someone she trusted completely has betrayed her. Though she knows that Ally and Reid are safe, Liz will stop at nothing to find them and get them back. From her guarded in-laws’ unwelcoming farmhouse to the deep woods of her own hometown, Liz follows the threads of a terrible secret to uncover a hidden world created from dreams and haunted by nightmares.

"[Jenny Milchman] carves out a new niche with this unusual mix of ecothriller and family suspense drama." ( Booklist)
"Milchman weaves a complex and intriguing tale, adeptly pacing the narrative as danger escalates.... Most impressive, though, is Liz’s transformation from a meek wife...to a strong, capable woman determined to rescue her children at any cost to herself." ( Publishers Weekly)
"The storyline is tight and suspenseful. Milchman has a gift that allows her to delve deep into the mind and psyche of her characters, and fans of dark plots like the works of Gillian Flynn will find another author to savor." ( RT Book Reviews)

What was most disappointing about Jenny Milchman’s story?

Bare with me- I'm going to try to explain what is off about this book ...This story is very abrasive. Not in a gritty, shocking way that you would expect of this genre, but in a way that the author doesn't provide you with the right background to understand some of the major events and characters. Usually part of the suspense is when your mind is racing through different possibilities as you click the puzzle pieces into place... I definitely didn't get that rush from this book. I felt like all the facts were just tossed out of the book with empty white fluff in between.
Furthermore, I am 3/4 of the way through the book and I still feel like it is just a marriage gone wrong with an endless custody battle. The main character married a radical environmentalist who runs off with their kids to live in the wild in some cult-ish community. Instead of breaking down every door between her and her kids, she searches the internet, plays in her garden, and stares off into the distance worrying about her kids. Jeez-louise... and when she does find people that "know" something about her husbands past, she politely begs them to tell her what they know. They refuse. She sniffles and walks away. Pathetic. If someone was standing between me and my kids, you can be sure they would be duck taped to a chair until they told me what they knew! Jeepers.
If you like true mystery/thriller/crime, don't waste your time on this one. B.O.R.I.N.G

I've always had a policy to finish any book that I start, but after getting through this, I've changed my mind. It's not that the book is bad, more that it is just not very good. What sounded like a great suspense novel turns out to be a flat, poorly developed waste of time. Skip this one.

Milchman writes a fantastic novel that has the reader (or listener in this case) constantly wanting more. The multiple perspectives play a pivotal role in this fantastic novel. The voice was perfect for this book as well. Highly recommend.

Waste of my time

Very disappointing. Story was disjointed and not believable. Kept hoping it would get better. Never did.
Reader did an acceptable job.

What a gripping thriller!

What did you love best about Ruin Falls?

The taut suspense had me hanging on by my fingernails. I loved the mysteries that were slowly unwrapped while the main character, Liz Daniels, desperately searched for her children. The emotions Liz experienced felt genuine and rang true - I can only imagine the horror of having your children disappear, and the entire sequence of events was spellbinding.

Aside from the riveting action and suspense, I loved the sense of place. The Adirondacks and "farm country" NY are places I'm very familiar with, and the descriptions resonated with me. Beautifully written, with "lifelike" dialog and inner thoughts, Ruin Fall sis one fine piece of fiction!

Which character – as performed by Cassandra Campbell – was your favorite?

This narrator is so talented, it's really hard to pick a favorite. Of course the main character, Liz, was portrayed flawlessly. Even the children - six and eight year olds - sounded right. The male voices are well done, too. Cassandra has a talent for infusing emotion into her voice without overdoing it - I love her work.

Absolutely! It killed me when I couldn't continue listening, and the book kept "calling" to me!

I loved Ms. Milchman's first book, Cover of Snow. It totally grabbed me. But this book, I believe her second, is EVEN better. I will be recommending this to all my reader friends. Thank you for a truly professional production and a beautifully written story.