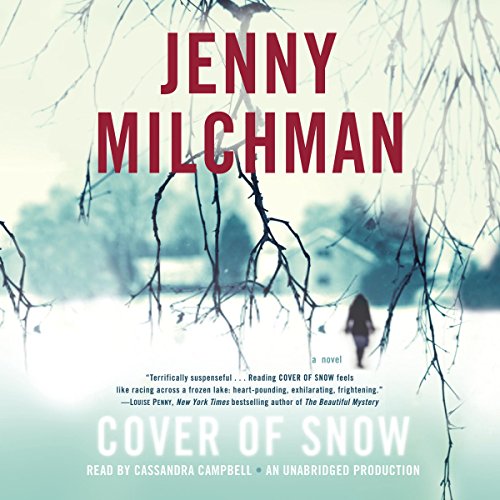 Jenny Milchman’s Cover of Snow is a remarkable debut, a gripping tale of suspense in the tradition of Gillian Flynn, Chris Bohjalian, and Nancy Pickard.

Waking up one wintry morning in her old farmhouse nestled in the Adirondack Mountains of New York, Nora Hamilton instantly knows that something is wrong. When her fog of sleep clears, she finds her world is suddenly, irretrievably shattered: Her husband, Brendan, has committed suicide.

The first few hours following Nora’s devastating discovery pass for her in a blur of numbness and disbelief. Then, a disturbing awareness slowly settles in: Brendan left no note and gave no indication that he was contemplating taking his own life. Why would a rock-solid police officer with unwavering affection for his wife, job, and quaint hometown suddenly choose to end it all? Having spent a lifetime avoiding hard truths, Nora must now start facing them.

Unraveling her late husband’s final days, Nora searches for an explanation - but finds a bewildering resistance from Brendan’s best friend and partner, his fellow police officers, and his brittle mother. It quickly becomes clear to Nora that she is asking questions no one wants to answer. For beneath the soft cover of snow lies a powerful conspiracy that will stop at nothing to keep its presence unknown…and its darkest secrets hidden.

What disappointed you about Cover of Snow?

Weak and implausible plot. More description of snow than of any of the characters. I get it - it's snowing. Hyperbole describing the main character's reactions. "The thin hospital blanket a strangling force". Really? A strangling force?

Has Cover of Snow turned you off from other books in this genre?

Just a waste of time.

I struggled to get into this book. I found the characters lacked depth and the plot and dialogue improbable. The narrator read with an intensity that continued to annoy me to the end. I nearly gave up but thought I would give it a chance to redeem itself. It didn't. I just read Chasing Fireflies by Charles Martin which was a great read, gripping me to the end. Made me realise in contrast just how much I disliked this book!

Loose ends-- too many questions unanswered

Narration lacked emotion & accents
need a lot of work. Dialogue slow & simplistic. Had a lot of potential but lost it towards middle. Thankful I had whisper sink so I could read it on Kindle. Won't be recommending this book.:(

What did you love best about Cover of Snow?

I loved the taut suspense and lush sense of place. I already adore The Adirondacks, and winter is one of my favorite seasons, so this book was a real pleasure to listen to. The characterizations were superb, the writing smooth and interesting, and the fast paced action never let me take a deep breath. Loved that.

What other book might you compare Cover of Snow to and why?

This book was actually very unique, but perhaps it could be in the same category as Joan Hall Hovey's THE DEEPEST DARK.

Cassandra's voices were distinctive and consistently recognizable, and I felt the emotion of the character through her narration. Outstanding job!

When Nora Hamilton wakes to find her husband dead one winter morning, it's just the beginning as one secret after another is revealed during a wild roller coaster ride through the snowy mountains.

I listen to a lot of "good," books, but this really stood out as one of the best in a long, long time. I keep thinking of the story - days later - and that's always a good sign! Thanks for a wonderful listen. ;o)

Baby it's cold outside

Despite some predictability and lots of improbablity Milchman knows how to crank up the suspense and keep you engrossed.

The sense of place. Cold. Snow. Gray. I wouldn't want to live there but I enjoyed reading about it. The creepiness of the place fit the plot.

Did Cover of Snow inspire you to do anything?

Sit close by the fireplace.

Couldn't force myself to finish. The writing, and the narrator's performance, were just awful. What a disappointment!

I was underwhelmed by this book. I found the writing to be difficult to follow, the author switches between first and third person with no reason that I could ascertain. Further, the characters were, unidimensional, with little or no development. I found Nora to be, frankly, annoying. The story seemed far-fetched, and not possible. Further, I do not believe that this book is a suspenseful novel, I found each other and to be completely predictable.

This was the first audible I’ve listened to for any length of time, other than just quickly evaluating a narrater’s style. This narrator added to the experience.
The story had many twists, turns, unexpected events, interconnected characters..though initially I didn’t understand the connections. The plot was a bit dark; sometimes the good guys turn out bad, and the bad guys .. I didn’t fully ‘figure it out’ and that kept me focused. Good book!

Other than never clarifying what tools she carried around, a truly good story well narrated.