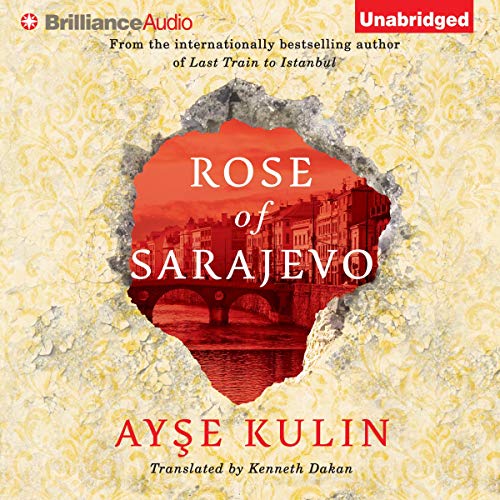 From the internationally best-selling author of Last Train to Istanbul.

Ever since Nimeta was a child, she’d done exactly what was expected of her. She married a responsible man she met in college, had two children, and established a busy journalism career - and there was no reason to think anything would ever change. Then one day, while reporting on a protest in Zagreb, Nimeta’s life takes a dramatic turn. Not only does she lay eyes on a handsome reporter who captures her heart, but a little-known politician by the name of Slobodan Milosevic delivers a speech fanning the flames of long-dormant Serbian nationalism. As her love affair intensifies and political tensions build, Nimeta is forced to reconsider everything she thought she knew about family, love, loyalty, and humanity itself. Navigating both the new landscape of her heart and that of her beloved war-torn city, Nimeta must draw upon her deepest reserves of inner strength to keep her family safe. A moving drama set against the backdrop of the crisis that rocked the Balkans in the 1990s, Rose of Sarajevo reveals the tremendous lengths people will go to in the name of love.

What listeners say about Rose of Sarajevo

This book will probably become a classic novel, read worldwide; it certain deserves to be.

A wonderful painful, but uplifting novel which weaves the tragic brutal awfulness of war with the love, passion and tenderness of individual lives. Beautifully written with such graphic skill that as a listener I pictured the struggles and events as if I was there. Well read by someone who seemed to love the book, this audio book is unforgettable! It is an informative and tender story vividly unfolding a terrible history with compassion and clarity.

Not what I was expecting, in a bad sense.

Even though this is fiction, it is based on historical events that took place not so long ago, thus it makes a perfectly interesting premise for me.
The horrors of war make the story more real and easy to relate to if you or your people in your family have ever gone through a war and you know what it's like, even if just from stories.
However, some things were very hard for me to bear. For instance, the main romantically twist was just too much for me. I am keeping this spoiler free in case it bothers anybody, so no details. In short, I realize that things like the ones described in the book may happen in real life, but they felt too foreign to me, too unrealistic. But this just may be me.
The last thing, do not, under any circumstances, listen to this book on Audible. The narrator did not do a good job. This is the first time I'm ever saying this about a narrator, but it was not good. She speaks so slowly I have to listen to the audio on x1.5,but then all of a sudden she speaks extremely quickly and I have to switch. I stayed on x1.35 for most of the book. The accent sounds Indian, which I wouldn't normally mind, but it just ruined the story's atmosphere for me because we are here talking Eastern Europe, Balkan, Turkey. Also all the names of people and places were mispronounced horribly and every time there is a pause before a new name and it just rang my bells wrongly.

Sarajevo, a town of less than 70,000 in 1917, grows to over 500,000 in 1991. The murder of one Austrian King (King Ferdinand) in Sarajevo precipitates WWI in 1914. The murder of thousands of Sarajevo citizens in 1992 nearly goes unnoticed. “Rose of Sarajevo” is a fictionalized story of an estimated 14,000 Sarajevo’ lives lost at the hands of Serbian soldiers.

Ayse Kulin, a Turkish author and newspaper columnist, writes of a female Muslim journalist that lives through the beginnings of the Balkan Wars in the early 1990s. The fictional journalist is married with two children and a husband who works as a free-lance engineer. Her husband is often absent from the family because of the nature of his contract work. His wife also works on assignment for the local paper and the children are babysat by their grandmother. The journalist wife falls in love with a fellow journalist. The husband finds out and leaves his wife and family. These personal circumstances are folded into the beginnings of the 1990’s Balkan Wars.

Kulin’s personalization of history is modestly successful with a love story that exemplifies the worst of what humans are capable of becoming. “Rose of Sarajevo” compels one to review the history of the Balkan wars. Kulin deserves some praise for that accomplishment.

A powerful read. The novel is set in Sarajevo in the 80's and 90's as Yugoslavia breaks apart. Nimeta is a Bosniak (Muslim) reporter and the novel follows the impact of the break-up on her family and friends, her work, and country and home of Sarajevo.

With a main character as a reporter, Kulin is able to weave large chunks of history into the narrative - they still feel a bit slow, but she follows through with the personal, intimate view of the impact of those larger events. The novel has some grim moments, particularly as it gets into the massacres perpetrated by the Serbs. But the novel also shows the proud history of the Bosniaks and how they lived in peace for years with Serbs and Croats in the city of Sarajevo.

While the novel's ending is ambiguous, I think it suits the themes and is a nod to what many who lived during that time dealt with.

Most Americans didn't pay a lot of attention to this war but we should have. The story is excellent with very real characters. This author is very good. I have also read Last Train to Istanbul.

The narrators voice really made it hard to listen to unfortunately

I wish I had read this book instead of listened to it. The narrators voice was flat and she pronounced the names and words horribly. Apart from that the story is a a must read!

Recent history presented in the story

I know people who traveled to Sarajevo during the siege on humanitarian missions. They described the stress and fear suffered by the people who were determined to continue daily lives right through horrendous conditions. There is much history presented here that explains how that particular conflict came about. It is not unlike so many other conflicts in history and in present day wherein two or more factions living in peace are torn apart when inspired by those who want war and dominance. It was good to listen and learn more of the history of what happened in the early nineties and hearing it along with a story spoken through the characters increased the interest. The story is left open which could leave one unsatisfied and perhaps there will be a second novel to complete the story of the character's lives and of the history to the current time.