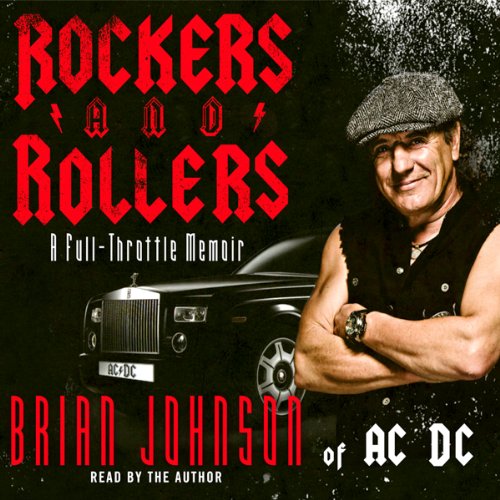 By night, Brian Johnson sings in the biggest rock 'n' roll band on the planet. But by day, AC/DC's charismatic, flat-capped frontman gets to indulge his passion for all things automotive. Cars and rock 'n'roll - they were made for each other.

Car racer, car collector, and all-round car enthusiast, Johnson is an incurable, certifiable petrolhead who can't remember a time when four wheels didn't feature as large in his life as music.

Starting, as a young boy growing up in Tyneside, with an old steering wheel and his imagination, a lifelong passion took root early. And through cramped teenage fumbles in an old mini and clapped-out, hygienically challenged tour vans, to chauffeur-driven, leather-trimmed limos and a sideline as a successful racing driver, it's been there ever since.

By turns, surprising, joyful, poignant, and usually laugh-out-loud funny, Rockers and Rollers is the story of man with an insatiable appetite for life and a glimpse into the extraordinary world of AC/DC, set soon to overtake the Beatles as the biggest-selling band in history.

Packed with hair-raising anecdotes and revealing a God-given talent for comic writing on every page, Brian Johnson has written the most unique, entertaining autobiography of the year. And essential reading for car nuts and rock fans. Well that'll be most of us then....

"A fast, fun read. In each of its 90 short chapters, Mr. Johnson recounts a memory relating to cars or transportation in some way. As a boy, he dreamed of becoming a racer, not a rock star.… Enriching his narrative are recollections of a childhood spent in England’s gritty industrial northeast. Mr. Johnson’s gifts for storytelling and humor shine in colorful anecdotes about self-loathing co-workers from past jobs and in obscenity-laced rants about the British car industry." ( New York Times)

Absolutely fantastic book. Brian Johnson owes me for a new set of shorts and jeans after laughing so much at his fabulous sense of humour. Cheers Brian ✌🏻🇬🇧✌🏻

Let there be Rockers & Rollers.

A fantastic listen. a must for your library.
Very funny and im from the NE too so totally get his crack.
Brians narration is outstanding especially when he chuckles before he reads the next line or makes a mistake. what an interesting guy, i could listen to him for ages. well done.

Fucking class, it’s like top gear with gold teeth and the radio on full blam

Brilliant.. you don’t have to be a car nut.. you don’t need to be an ac/dc fan... a charming funny enthusiastic passionate recollection of anecdotes... laugh out loud at Brian Johnson’s boyish way with words!

I had a good time listening to this book. The fact that Brian Johnson himself is the narrator makes it even better. There are times when it’s a little difficult to understand what he’s saying due to his thick accent. I also enjoyed that they left in some of the bloopers and you could hear him and whoever was in the studio with him laughing about it. If you’re getting this hoping to hear a bunch about AC/DC then you may be disappointed. Some of his stories are about the band but most are about cars. I knew he liked cars before I listened to this. I just didn’t know how much. Anyhow, give it a listen and have fun.

Ramblings without direction. His life and gears.

Liked listening to his rambling thoughts on anything with gears. It makes you wish you were standing in a garage overlooking one of his cars and a pint in your hand.

This book was excellent. Strongly recommended for the car guy and rock and roll enthusiast. Learned a lot about Brian and his racing, and his passion for cars. Very entertaining, and informative. If you love ac dc, Cars, race cars, and rock and roll you will not be disappointed. Brian does an excellent job throughout the book. Very impressed.

I thought he’d write about the band days and why he had to quit singing. Lucky it only a four hour listen. A lot of short story’s about cars. At times funny. Hey Brian I’m not asking for a refund. That should count for something !

no hubris here, just a sence of humor,

audible: mr. johnson should read for us some scientic books, he would spice them nicly with his funny accent.

Rock & Roll love it fun and funny I am a car nut as well Brian did a great job narrating keep on giving us more
PS. hope you get better an can keep singing Brain an writing
Cars and rock an roll aren't noise pollution

Brian Johnson is an over the top character. The story is a must have in a unique delivery.

Huge respect for a man narrating his own work!

Simply because of the sincerity, authenticity and effort put in this work.

What other book might you compare Rockers & Rollers to and why?

What does Brian Johnson bring to the story that you wouldn’t experience if you just read the book?

His own persona and presence.

Life on the fast lane.

I respect a man who does things by himself. Because of that alone it is a true sign of being a real entrepreneur.

loved it. it was like listening to a British version of my Dad talking cars.