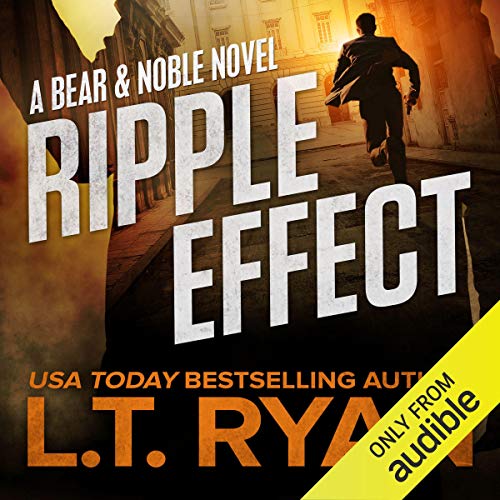 One shot. One kill. A simple plan. A simple operation. But it doesn't take much to throw off the assassination of a corrupt US senator in a foreign country. Not once the cartel gets involved.

Can Riley "Bear" Logan and Jack Noble fight through the waves before a traitor gets to them first?

What listeners say about Ripple Effect

Good Story, Let Down by Narration

The story itself was good, but it was let down by the narration. I found it difficult to know when it was (Bear) Riley Logan, speaking, rather than Jack Nobel. Dennis Holland is a hard act to follow, but the narrator makes little attempt to adjust the tempo and cadence of Bear’s voice, and Jack’s respectively. It’s just not the Bear Logan and Jack Nobel the listener has grown to know and love.

All Of L.T. Ryan's audiobooks are in my Audible library and almost all have earned 5 stars for both the story and Dennis Holland's narration. Alexander Cendese's narration of RIPPLE EFFECT is so poorly done that it earns 1 star because a lower rating is not possible. The plot of RIPPLE EFFECT is OK but not nearly as good as Ryan's other novels. For the first time author Ryan substitutes endless action for plot clarity.

Changing narrators was a HUGE MISTAKE

THE VOICES WERE JUST ALL WRONG.....I couldn't finish chapter 2. Dennis Holland should have been the narrator

Narrator not good. Very hard to finish because of this . Love books and characters.

What? Lots of gang stuff I don't understand

Couldn't finish it. not interesting. is a plot forthcoming? I'm normally very patient. confusing. lack of transition between chapters.

Narrator a real put off

Story good enough but after doing the Jack Noble series this narrator almost made me ditch this story 10 minutes in. Makes Noble and Riley sound like a couple of young teenager gang members who are absolutely full of themselves and just love violence and have terrible voices. The voice of the female character is another turn off. l persevered because it was background while l was working. Narrator irritating through the very end.

I’ve been missing Jack and Bear. It was interesting to hear from Bears perspective. That being said, I hated this narrator. Please bring back the old jack and bear voices!

Please don’t ever use this actor again

I could not stand listening to this actor.

Unfortunately I didn't enjoy this book like I did earlier Jack Noble series. It seems to be a trend. Even the narrations were sub par. I get it, we are have a lull in our performance and we go through a rough patch. I hope this is what happened here. I was looking forward to completing this series and starting some of the other series, but my confidence is waning with each book I read.

An average story. The humor was forced. Too many details that did not add to tje flow of the story.

This audiobook was a pleasant surprise for me. The action was consistent throughout the recording and the characters were great together. Alexander Cendese gave a wonderful performance drawing you deeper into the story.