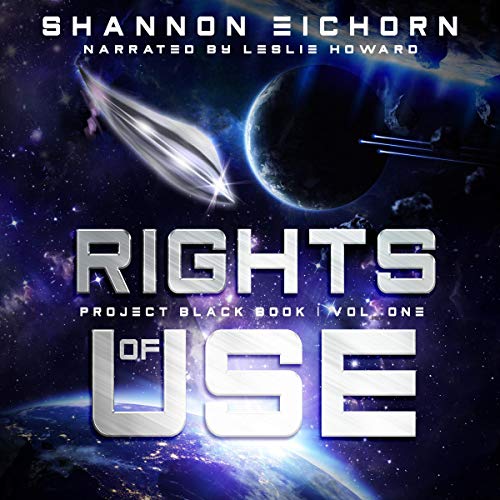 In the 1960s, project blue book assured America that no aliens visited its amber waves or shining seas.

Thirty years later, project black book knows better and has the flying saucers to prove it, but they still can’t stop the body-possessing Kemtewet from scooping their pick of young women from Earth to host an alien queen.

Sarah Anderson yearned for an escape from her new life in PA, but not for this: being kidnapped by aliens and faced with a choice between having a Kemtewet queen erase her brain or sharing her body with a Gertewet insurgent. Unless the Air Force can rescue her in time, it’s either death or a chance to make a difference in the galaxy. With Sarah, the Gertewet have one last shot to end the Kemtewet Empire and free billions of humans subject to their body markets.

In a war over consent, only some things are black and white.

What listeners say about Rights of Use

This book is amazing! You should get it if you are reading this!! Well done Shannon!

Rights of Use is an interesting take on the symbiant idea in science fiction and a fun use of the flying saucer. The characters are interesting and the two symbiant cultures builds a complex and dynamic universe that makes you want to know more. It starts a little slow, but don't let that deter you. The plot picks up and and you won't want to put the book down. I'm looking forward to the next book to find out how Sarah and Project Black Book on Earth grow and change.