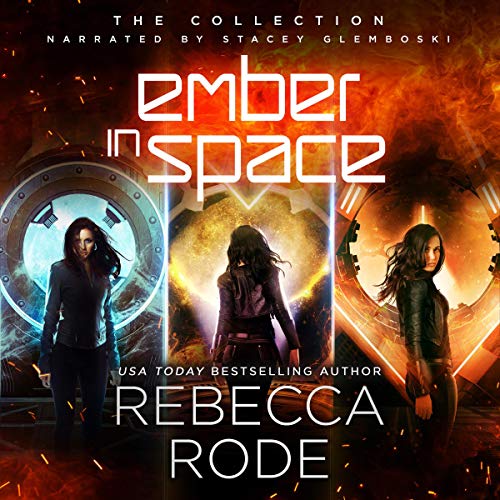 The Ember in Space Collection 1-3

By: Rebecca Rode
Narrated by: Stacey Glemboski
Try for £0.00

A girl who sees the future. An evil empire bent on using her. Can Ember destroy the empire before she becomes their deadliest weapon?

From the USA Today and Wall Street Journal best-selling author of the Numbers Game trilogy come these three books bundled for fans of space fantasy and sci-fi thrillers with romance.

Getting sold to the Empire was never part of the plan.

Ember lives two very different lives. By day, she's a mysterious Roma future-teller, and by night, she struggles to care for her sick father. All she wants is the power to control her own life - no arranged marriage, no more poverty. Her future-reading talent is what will get her there.

But when the empire discovers her gift, Ember's life changes forever. Ember soon finds her innocent talent is far more dangerous than she believed. The empire wants to turn her into a deadly weapon. But Ember has plans of her own, and they don't include living under the empire's control - because, even the best weapons can backfire.

The Empire has taken everything from Ember. It's time for payback.

Ember doesn't have time to mourn. She's got big plans - save the oppressed flickers, rescue Stefan, and bring the Empire to its knees. But she soon discovers that her ability has a terrible, unthinkable cost. Can Ember choose between the man she loves and the Empire she hates?

Stefan has succeeded in helping Ember escape. His grandmother's prophecy is being fulfilled, and he's ready to face execution for his part in it.

But when he uncovers the Union's deadly secret, Stefan realizes he must survive long enough to find the Union's base and warn Ember, before she pays with her life.

Two flares. Only one will claim victory.

Ember has thrown the Empire into upheaval. The entire realm knows her face, and her name is whispered in alleys and in the underground. Everyone wants to know what she'll do next because it's clear she's the only person alive who can challenge their new, strangely powerful emperor. A massive battle is inevitable, and the entire realm is taking sides.

There's just one problem. Every time Ember uses her power, she loses a piece of herself. Fighting the emperor could cost her very soul.

Meanwhile, Stefan worries that Ember is slipping away from him. As she grows erratic and unpredictable, he's torn between his love for her and his desire to protect the revolutionaries. Can Stefan save the woman he loves? And can Ember fulfill the prophecy written in the stars before she loses herself completely?

This bundle contains all three books in the Ember in Space series:

What listeners say about The Ember in Space Collection 1-3

She needs allies, but she’s not sure who to trust

This collection contains all three novels in Rebecca Rode’s Ember in Space series, a space opera reminiscent of Star Wars, but less compelling. The setting is interesting, but too violent and dystopian for my tastes. The premise is interesting, and I liked the descriptions of how the flicker and flare abilities work, but the pacing seemed off at times for something billed as a thriller.

I wasn’t very invested in these characters. I was curious about where the story would go, but I never really cared enough for the story to consistently hold my interest.

I found the main character, Ember, frustrating. She’s so stubborn, so naïve, so stuck in her Romani ways, and so very sure of her abilities, yet so insecure in her relationships. I could sympathize with her though, because so much of her life has been turned upside down. She’s in a situation where she really needs friends and allies, but she’s not sure whom she can trust. She has difficult choices to make, and I can’t fault her for sometimes choosing poorly. I did have trouble sustaining disbelief at times, as Ember’s powers grew exponentially and the plot took wilder and wilder turns. It reminded me of an RPG where characters level up too quickly.

Because there was so much brutality in the first book, it was nice to see the story reach a happy ending. I do wish we had a chance to get to know some of the secondary characters better and learn more about the various alien races. The story is told mostly from Ember’s point of view, and she doesn’t spend a lot of time getting to know others, so we don’t get to learn as much about anyone else.

If you’re a fan of space opera, then you might enjoy this. This story works well as an audiobook. Stacey Glemboski did a nice job with narration. She’s easy to understand, her pacing is good, and I enjoyed the character voices. I especially loved when she sang as Ember; that was beautiful and really brought the story to life.

I was given a free copy of this audiobook by the author and volunteered to provide an honest review.

The story flowed very well. A mix of sci-fy, fantasy, good vs evil, light vs dark, dystopian societies with a love story of soulmates. It has something for everyone. It’s not a space opera it’s so, much more!!! The narration was great! Loved her Roma accent!!!