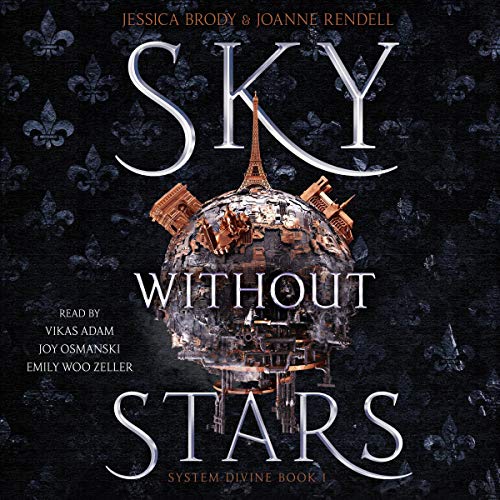 In the tradition of the Lunar Chronicles, this sweeping reimagining of Les Misérables tells the story of three teens from very different backgrounds who are thrown together amid the looming threat of revolution on the French planet-colony of Laterre.

A thief. An officer. A guardian.

When the Last Days came, the planet of Laterre promised hope, a new life for a wealthy French family and their descendants. But 500 years later, it’s now a place where an extravagant elite class reigns supreme; where the clouds hide the stars and the poor starve in the streets; where a rebel group, long thought dead, is resurfacing.

Whispers of revolution have begun - a revolution that hinges on three unlikely heroes....

Chatine is a street-savvy thief who will do anything to escape the brutal Regime, including spy on Marcellus, the grandson of the most powerful man on the planet.

Marcellus is an officer - and the son of a renowned traitor. In training to take command of the military, Marcellus begins to doubt the government he’s vowed to serve when his father dies and leaves behind a cryptic message that only one person can read: a girl named Alouette.

Alouette is living in an underground refuge, where she guards and protects the last surviving library on the planet. But a shocking murder will bring Alouette to the surface for the first time in 12 years...and plunge Laterre into chaos.

All three have a role to play in a dangerous game of revolution - and together, they will shape the future of a planet.

What listeners say about Sky Without Stars

Good but started to drag

I really liked the idea of this book but thought the characters were a bit weak - apart from Chatine - and the ending didn’t have a very exciting climax. I didn’t buy into some of the ideas like everyone thinking Chatine was a boy just because she kept her hood up, but if I ignored the things that didn’t quite seem believable - even in a fantasy setting - the book had a lot of potential. There just isn’t quite enough to make me want to read another 18 hour sequel.

StuPeed (Their word, not mine)

I completely understand this novel is meant for young adults/teens. It's also fantasy and based on Les Misérables.﻿ And in that vein I gave it a try. I'm 1/2 way through the tomb and I just don't understand why fiction for younger people can't be well written. The "story" is fine, as it goes. But the writing is stinted, over melodramatic and just "stupeed" (a term used over and over as a sprinkling of French seems to be the only nod the authors can come up with to give this work a European flare). It reminds me very much of the "Twilight" series that was so popular. Maybe this will take off as well. But purely as a work of fiction in the Audible format it's painful. The performance is shared by three readers who split duties as each chapter switches to the point of view of the three main characters. None of them are captivating nor do they do the work any favors by softening some of the more cringe-inducing dialogue. I would give Chatine a nod for helping the story move along in a way that's somewhat engaging. I will finish this book. I paid for it and I don't have any credits until the beginning of next month. I will warn away ANYONE who didn't "LOVE" the Twilight books and novels of that type.

I’m not a young adult, so this wasn’t written for me. I also read and loved Les Miserables. This is not a sci-fi adoption of that story. It is a story where the characters are loosely based on the characters from Les Misérables, but without the moral depth. Like I said, this wasn’t written for me. Additionally, the narrators’ weird habit of pronouncing some words with a French accent was annoying.

Too long but not much character's development.

I was very excited to listen to this book, I thought it was very promising and I was loving it at first. I really like the Les Miserables vibe and that it was at space, but we really didn't see anything related to space except mentions of others planets, that was all. It was also very long, and in the end we didn't have a lot of plot going on, just running around. I struggle to finish to be honest and won't be listening the second one. In the end, I hated Aloutte or whatever her name was, she didn't know anything and I felt she was very cruel to her father when she learned the true. Not the great characters I was expecting.

I had a lot of fun listening to this book! First of all, the narrators were great and their slight French accents made it more realistic. The rotating POVs moved the story along nicely, as did the short chapters. I didn't feel like there were any dull moments and I was totally engrossed in the plot. I had no idea this was a retelling of Les Miserables, which I haven't read or seen, so I didn't get those references, but that's an interesting tidbit!
This did a good job of being sci-fi without going too far into the genre, so if you're unsure about that part, give it a try. The characters are complex and I loved piecing them together. The way they intertwined was cool and this unfolded so well. I'm excited for the next book!

Each of them gave quite a performance with the main characters and the other characters as well!

loved all but the ending

loved it and read most of it in one sitting bc it was so hard to put down. I just didn't care for the ending. it was a cliffhanger but it didn't wrap anything up! not cool

Longer than I expected and I'm sure the next novel will be just as long. I enjoyed the female narrators however the Male narrator drove me crazy.

I can’t wait for book 2 to continue the story. I didn’t like the voice of Chateen however. It grated on my nerves ( almost quit listening because of it ) but I got used to it.

Absolutely loved this book! This is my second read through to get ready for the final book. The twist on the original is such a great inspired story.