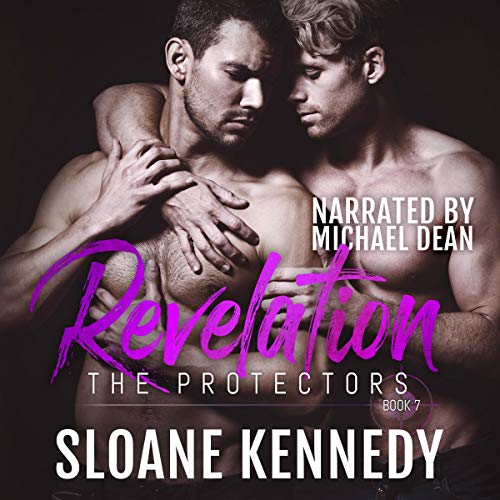 By: Sloane Kennedy
Narrated by: Michael Dean
Try for £0.00

"I trusted once. I won't make that mistake again..."

An ugly childhood and devastating betrayal have left 25-year-old Cain Jensen scarred inside and out. Protecting himself means keeping everyone at arm's length and protecting others means never getting emotionally involved. In the three years since he's joined an underground vigilante group, every life he saves helps ease the guilt of the ones that were lost to him so long ago. So when he's sent to a remote cabin in the Cascade Mountains just north of Seattle to follow up on the disappearance of his boss's co-worker, his only thought is to see that justice is served, no matter what the circumstances.

But nothing he's ever experienced has prepared the cold-hearted and very straight Cain for who he finds on that mountain...or the intense need to suddenly offer more than just protection.

Ethan Rhodes has been running for six months, but it's never fast enough, it's never far enough. At 30 years old, the talented ER Doctor should be spending his days saving other people's lives, not worrying about his own. But he knows that the four years of physical and emotional abuse he's suffered at the hands of his volatile ex are nothing compared to what will happen when Ethan runs out of places to hide, especially after taking something from the man he once was sure would be the love of his life.

A violent episode that has Ethan narrowly escaping death leads to a quiet cabin in the mountains where his battered body will have time to heal before he and the young girl relying on him need to run again. But everything changes with the arrival of a mysterious stranger who threatens to give Ethan something he'd finally accepted was gone forever...hope.

To get to the truth, Cain must first get through Ethan's defenses, but watching the other man's walls start to come down forces Cain to face his own past. And as the tremulous connection between the two men grows and gives way to something more, both will need to decide if they're willing to risk giving each other the one thing that has cost them so much in the past...trust.

Will two men who've vowed never to let someone close again let down their guard long enough to find each other, or will they let their pasts determine their future?

Trigger warning: Triggers for this audiobook can be seen ahead of purchase by utilizing the "Look Inside" feature or downloading the sample and scrolling to the specified page.

Can be listened to as a stand-alone story - no cliffhangers.

The Protectors series crosses over with some of my other series, so for the most enjoyment, they should be read/listened to in order, but it is not required. You can find the correct reading/listening order at the beginning of each book. I've also bundled all my series in the correct reading/listening order under the title of A Family Chosen: The Protectors and Barrettis.

What listeners say about Revelation

Not Enough Stars For This Author or This Series

Another great book in the Proctectors series by Sloane Kennedy and they are getting better and better!
Each one has amazing characters and plot and every single time Sloane Kennedy tears you down by wringing every emotion out of you before building you up again.
Roll on book number 8 Redemption!

Ethan and Cain have beautiful souls . You can, feel the pain, anguish that each of them have dealt with.
Michael Deans narrating is brilliantly done. you could feel ever emotionally uplift or down. spoiler Cain mother shoud have suffer and paid for what happened.

Narrator Michael Dean delivered another beautifully perfect delivery of the Protectors series. He is an extremely accomplished narrator, one will always be satisfied listening to his audiobooks.

This book does come with trigger warnings of physical, emotional and sexual abuse. This kind of mistreatment calls for the Protectors. Cain, who has his own traumatised childhood, is sent to go search, find and protect Ethan. The two develop an intimate relationship while both are simultaneously able to breach the others’ defences.

This audiobook has it all. It’s almost too short for me. The plot is gripping and it held my attention in one sitting.

Fans of Sloan Kennedy and Michael Dean will not be disappointed.

Sloan Kennedy writes strong men who are damaged. Listening to Michael Dean narrate her books takes them to a new level. This will be a repeat listen.

better every time keep them coming

Another great story from this author. It's one of my favorites in this series. Ethan and Cain are so perfect together. Michael Pauley is fantastic as per usual.

This is another outstanding audiobook! The combination of this author and this narrator is a deadly and worthy listen. I am in awe of how much these two capture and keep your attention withe words and voices!

The story is an epic tale of two men living through a serious metamorphosis. The story is built on previous horrendous abuse, and the characters who survived it. The plot is rich and deep, finding a way out of, and free from, the past. The relationship the main characters find during their journey organically grows from the intensity of their situations, the struggles of the past that have left deep scars on their hearts and bodies, and slow won trust. Thankfully, the story is void of wishy-washy angst. If you’re looking for light, fluffy, feel good reading, skip this book. If you’re triggered by abuse, you might want to skip this book, as it is a constant theme and you can’t just ‘skip that part’. This book has a lot of beautiful parts, but like life, it’s messy and filled with darkness too. Overall love triumphs and the best part is that the bad guys don’t win- and even though you know that, the ending will surprise you!

Another incredible emotional roller coaster! What an amazing story!! I cried my eyes out! Loved this book so much! The audiobook is exquisite because Michael Dean is phenomenal!

Love Cain and Ethan. Incredible story that really took me on a roller coaster of emotions but I enjoyed every second of it. The narrator is spectacular and I can’t wait for the rest of the series to come out!!

This performance was so good it moved this one in this series to the top of my favorites.