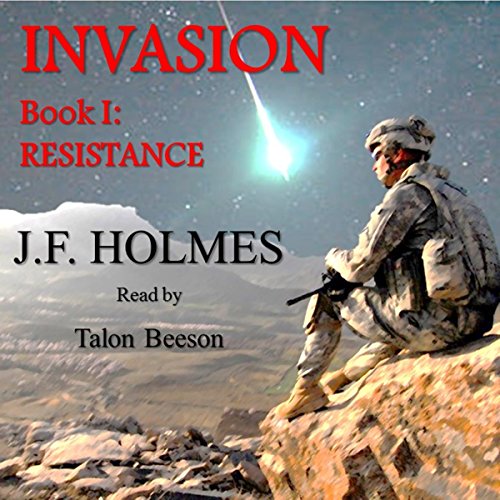 Eleven years before, General David Warren was the best and brightest, in charge of defending the Earth from an attacking fleet. Overmatched in battle, the Earth forces were devastated, and the enemy moved into the high ground and proceeded with orbital bombardment. Civilization fell, and then two years later, the enemy landed and the occupation began.

Now, Warren lives with his sister and nephew, trying to farm the land while avoiding detection by the occupiers, the Invy. When two travelers show up at his doorstep, his carefully constructed life starts to unravel.

Earth and humanity may be down, but not out.

What listeners say about Resistance

John Holmes spins us a tale of multiple alien species overseeing earth after a devastating invasion. The superior alien technology and vastly superior firepower made short of the combined forces of the planet.

Now we are 11 years into the alien invasion. Life pretty much stinks if you are human. While the aliens believe the military is quashed, there are still organized armed forces running missions under their noses. Sometimes these forces even get away with it. This is the story of those forces and their effort to take the planet back from the aliens.

This is a great story. The author keeps your attention all the way through. The characters and dialog are believable and authentic.

This story and narration makes the miles go by fast. It gets my highest recommendation.

I appreciated the take on alien invasion, Holmes does a great job world building. I just wish the rest of the series was available on audible.

I enjoyed the heck out of this book. great story the the narrator does a good job.

the story is of the lead up to liberating earth from alien invaders.

This book reads like some of the old "juvenile" sci-fi of the 50's and 60's. We have talking cetaceans and apes teaming up with the remaining human resistance against invading alien "dragons." If I was still 15 I would probably have enjoyed it.